How to get better pictures out of my Canon 400D? [duplicate]

Today I took the same picture with both cameras and I like the Nikon's much better (second image). 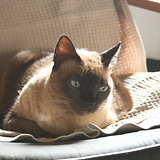 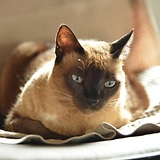 However, I love the Canon camera because it's much lighter, I find the controls much more intuitive and I have several flashes for it.

Is there an upgrade I can make to get similar photos from the/a similar Canon camera?

It is possible to get a lot closer to the Nikon result with even the older, lower end Canon camera by using a more comparable lens that allows you to shoot from a bit further back.

I think I had pretty much the same distance in both pictures. I tried to get the same frame, so the focal length is different because of the different sensor size. EXIF says 53mm for the Canon and 105mm for the Nikon, not sure how accurate that is.

53mm on the 1.6X Canon camera is the same angle of view as 85mm on the FF D800. A more proper comparison would have been to use the 24-120mm lens on the Nikon at 85mm instead of 105mm. Then you also need to consider that from the same distance at 53mm with the crop body you need to use an aperture of f/2.5 (something your Canon lens doesn't come close to offering) to get the same DoF you would get at f/4 using the FF camera at 85mm. Since your 18-55mm Canon lens is limited to f/5.6 at 55mm, using f/9 at 85mm with the FF Nikon would give approximately the same DoF as you got with the Canon camera and lens.

In the end, the gear does affect the result here (particularly the sharper, faster lens with stabilization versus the softer, slower lens without stabilization), but a more experienced and skillful photographer can get more out of the older, lower end camera than what we see above. For more along this line of thought, please see: the best way to improve image sharpness on Canon 700D

¹ The equivalent model in Canon's lineup today (which is a much better camera due to improvements in technology between 2006 and 2019) would be the $700 EOS Rebel T7i/800D.

The main difference in the images seems to be a much shallower depth of field on the full frame camera. So, yes, there is a solution: a suitable lens.

Try the Canon 50mm f/1.8. It's very cheap (not that much over 100 EUR/USD/GBP/whatever-currency-you-prefer), and the f/1.8 aperture allows you to have a much shallower depth of field. Also, it overcomes the need to have image stabilization or flash, because the aperture is so big. Your Canon zoom lens lacks image stabilization because it doesn't have "IS" in its name.

What the Canon 50mm lacks is zoom, so you need to learn to zoom with your feet. Set the aperture to f/1.8 (use the aperture priority mode) and start shooting!

Now, of course a 10 MP crop sensor camera won't be equivalent to a 36 MP full frame camera. However, given the right lens, you may just end up with somewhat better pictures.

There could be a bit of blur move in the hair on the forehead on the Canon picture (did the cat frown?).

For me the Canon picture has a bit of front focus (compared to the Nikon where focus is exactly on the eyes). My experience with the xxxD series is that the focus isn't always accurate, all my lenses got better when moving to a 70D. However, a faster lens can help because it will allow a more accurate focus sensor to be used by the 400D (there is a focus sensor that comes into play when the lens can open at f.2/8 or better).

I see a couple of noticeable differences here:

edit: by mentioning the size and MP of the sensors, I'm stating that the Nikon sensor can capture more data and will therefore have better dynamic range as well as images that appear sharper thanks to the higher resolution and the compressed ratio that you view them at. As mentioned in the comment below, simply having a higher resolution is not by any means directly related to a better image.

Not the answer you're looking for? Browse other questions tagged equipment-recommendation or ask your own question.

2
How to improve image sharpness on Canon 700D?
1
upgrading from kit lens

2
Is it a good idea to buy the Canon 5d mkii body only & buy the lenses separately?
4
Which Canon lens combination should I buy for landscape photography?
0
Which Canon T2i bundle is better to get?
4
Should I replace the Canon 18-55mm f/3.5-5.6 kit lens with a 40mm f/2.8 or 50mm f/1.4?
0
What's the best Macro/Portrait setup gear I should look for?
0
Will L glass lenses compared to what I have upgrade my overall Image Quality?
17
Is replacing all my Fujifilm gear with this Canon zoom lens an upgrade?