Washed out colors in Irfanview

Someone sent me some very large JPEG pictures, like 15mb each. They look fine in Windows Photo Viewer (Windows 7), but they appear extremely dull and washed out in Irfanview. It's like half of the colors have gone missing, like the saturation has been turned way down.

Worse, when I save them with Irfanview, the color loss remains in the new file no matter what it's viewed with.

I thought maybe the problem was that I was using Irfanview 32-bit, but the problem remains after upgrading to 64. I've also tried changing the color management settings to no effect.

I want to re-encode them using Irfanview's batch function (they're barely encoded at all; that's why the file sizes are so large). That's my main issue, but also, I'd like to know why they look so bad simply when viewing them in Irfanview too. I've never seen this before, and I've been using Irfanview for years.

Update: I've tried opening the pictures in GIMP, and very quickly when it opens, at the bottom it says "Converting from Prophoto to sRGB built-in". The pictures look fine in GIMP.

The actual option that I think fixed it is the bottom option, the one that says to apply sRGB to pictures without a color profile. 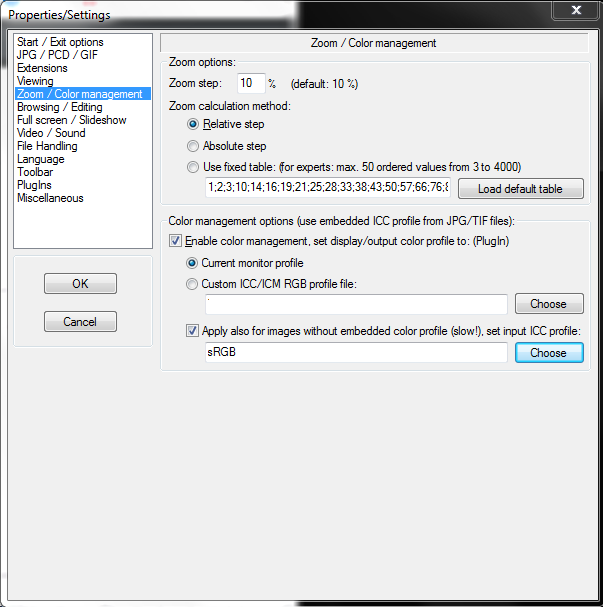 Not the answer you're looking for? Browse other questions tagged photo-editing color-management image-processing or ask your own question.

13
How can I ensure proper color rendition with browsers on wide gamut displays?
10
Is facebook applying some undetectable color profile or is firefox's color management nonsense?
5
Oversaturated colors in Chrome (V43) on wide gamut monitor
1
How to set up correct color profile in Windows?
3
How to check if there are any out-of-sRGB-pixels in an image?
6
Why are image colors inconsistent in different applications after monitor calibration?
3
Does the "For Display" Color Management setting in Digital Photo Professional Duplicate the Effects of Calibration?
0
Same sRGB image different colors in Lightroom, Windows, Web and Android
4
Image colour inconsistency between browsers, image viewers, and Photoshop
1
How to emulate sRGB on wider gamut or buy only sRGB monitor?