How to correctly apply gamma to linear raw files from a machine vision camera?

Before any gamma correction: 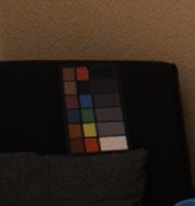 After applying a 2.2 gamma: 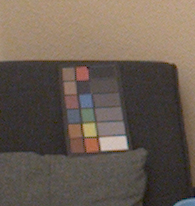 Overall, the brightness in the image looks substantially better. However, the colors in the color checker appear very desaturated. Is color desaturation a natural consequence of applying a gamma, and if so what can be done to compensate for that effect?

Update: I'm using an IMX 265 from TheImagingSource along with their provided capturing software

Just visually, this looks absolutely correct to me. In your non-adjusted image on my color-calibrated monitor, the steps between the gray patches appear irregularly spaced. In the adjusted image, they're more perceptually even.

Is color desaturation a natural consequence of applying a gamma, and if so what can be done to compensate for that effect?

No. It's a consequence of not setting proper black levels and white point. You should do that before applying the gamma curve.

The gamma curve you applied is shaped something like this: 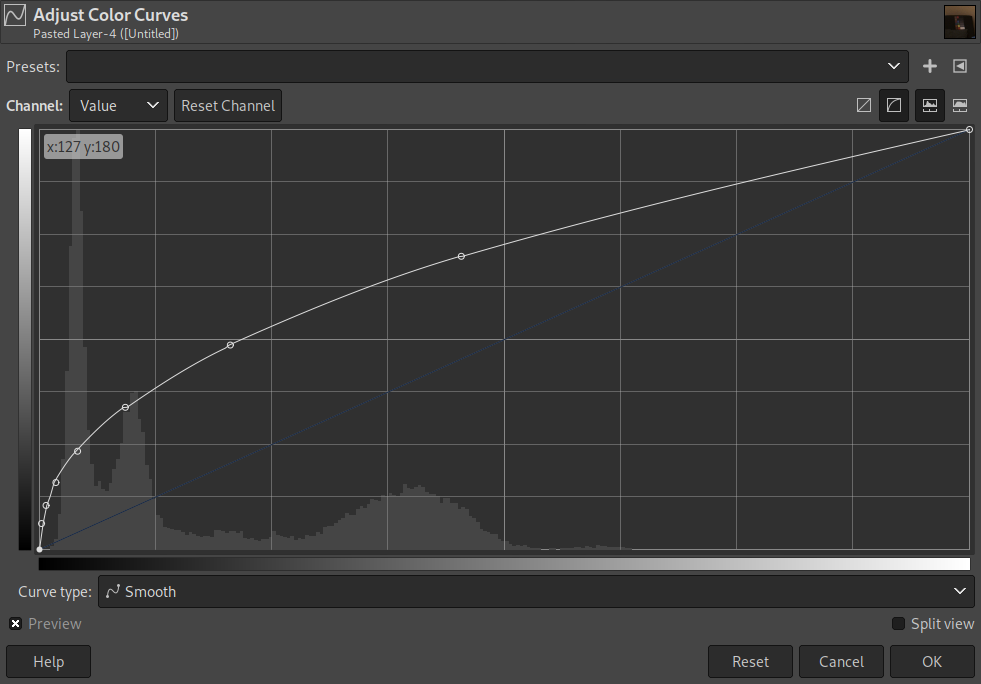 The light line applies to the values shown in the histogram. Once you've applied that curve, you get a histogram like this: 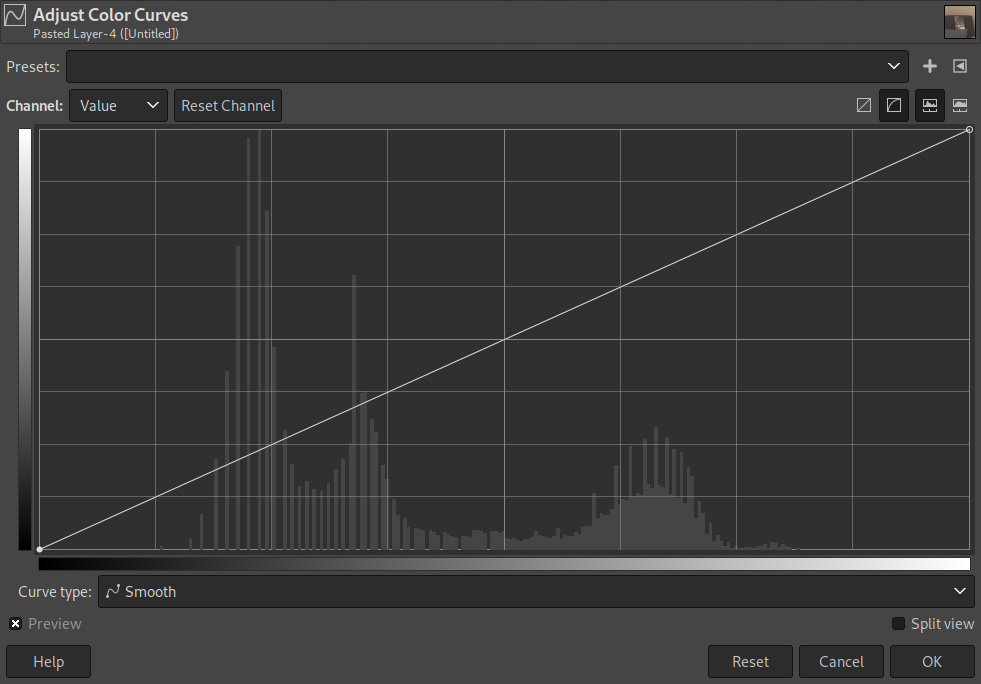 This is basically a boring, "flat" curve — that is, while it's not linear in value, it's perceptually basically so. However, you can see that the values are all bunched up in the middle. This is very functional and may be what you want for machine vision purposes, but is not generally what we want for visual ones. We may want to increase the contrast simply by pulling in the black and white points, like this: 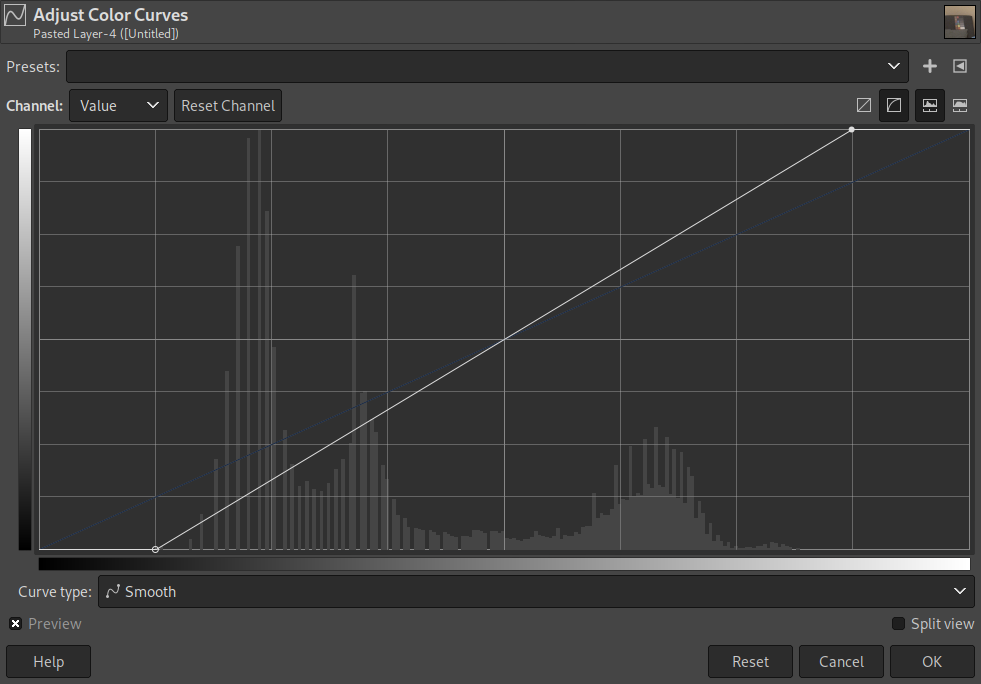 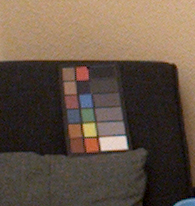 Your camera may have an adjustable black level, and you may want to raise that slightly. You'll also need to set an appropriate white level for your camera for use in conversion. You may want to look at the dcraw code for how this is typically done. (Well, spoiler: dcraw sets the white level to the 99th percentile of the histogram.)

That result has a histogram like this, by the way: 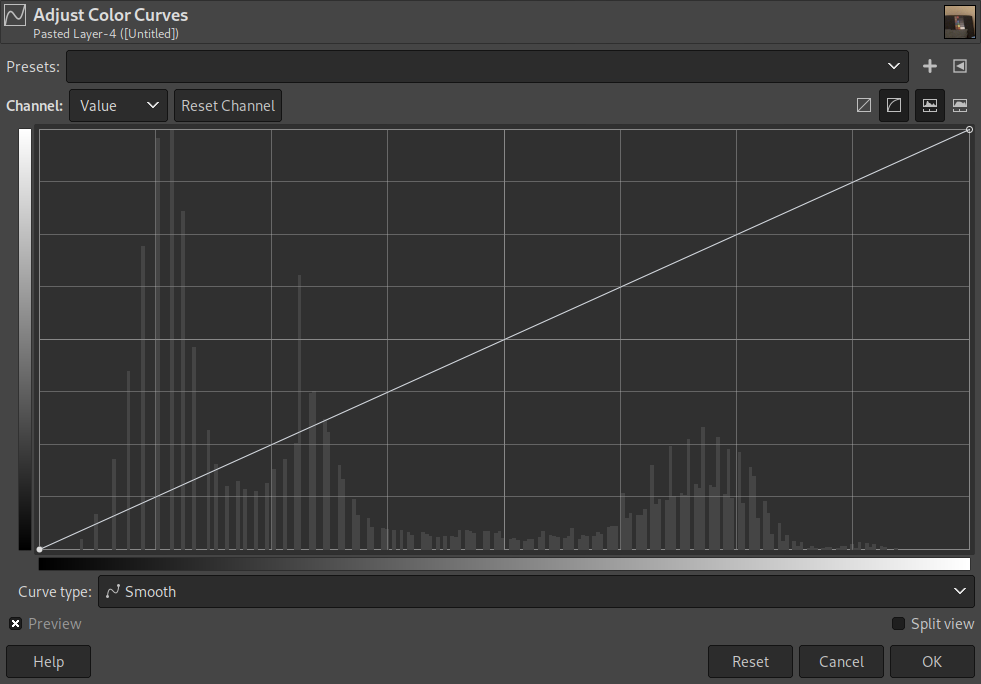 which you can see extends more to the extremes of the histogram. Because I am working with an 8-bit image in an 8 bit space, you can see that the colors are becoming sparse; for "real work" you'd want to work in a higher bit depth (and probably only apply one transform, rather than a series).

In any case, this is still a little boring. In the visual world, we may want to apply an s-curve, like this, to increase the punch: 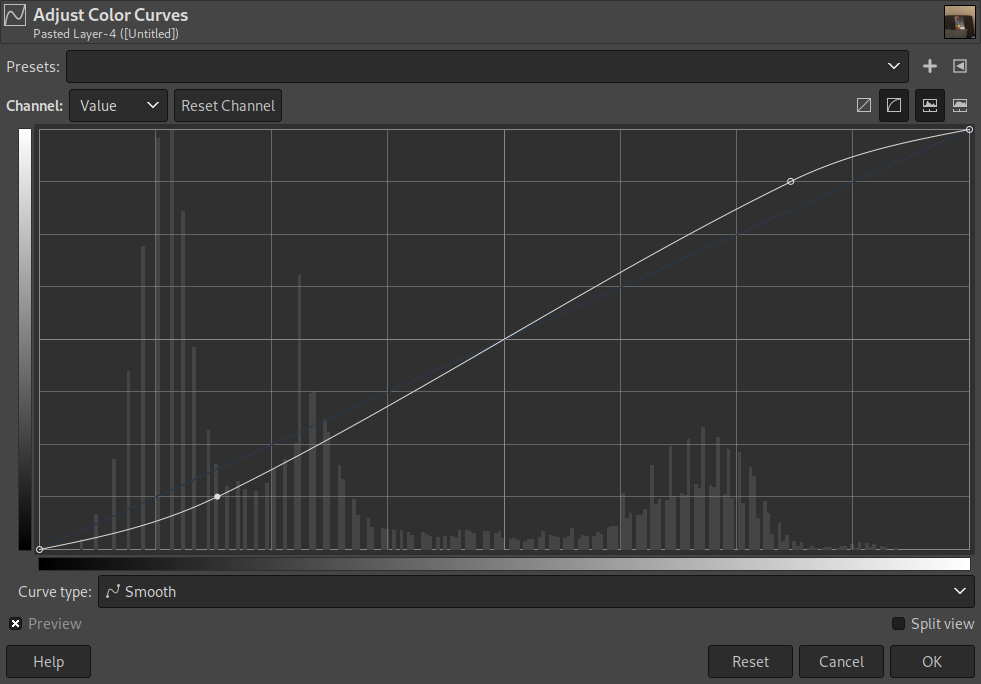 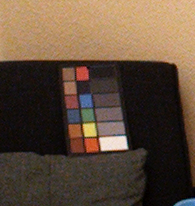 That camera does have a gamma feature you can use (simple gamma) it also allows the use of a LUT if you wanted a more exact transfer curve for Rec709 (HDTV) or sRGB (Computer monitor).

For computer monitor viewing, applying a gamma of 1/2.2 (i.e. 0.4545) to linear image data is (essentially) the inverse or the 2.4 gamma of the monitor with a small gain included). As Mattdm pointed out, you want to set your black and white point before applying the gamma.

Color desaturation is not the "inevitable result of gamma," perceived saturation is affected by a number of interdependent factors.

EXPOSURE: when shooting on film, if you overexpose and then print down, you'll get richer, deeper saturation. This is true in digital photography as well, so long as you don't clip at the high end, exposing high and then adjusting down will result in a perceptual increase of saturation. (Thus the reverse is if you underexpose and print UP, you reduce saturation.)

LIGHTING and SCENE/SURROUND: The lighting in the scene and the surrounding imagery will affect local color perception.

DYNAMIC RANGE/CONTRAST: This also affects apparent saturation — as mattdm pointed out, raising the black level and lowering the white level (which increases contrast) also increases saturation — in fact, you can "sort of" consider saturation as a function of colorcontrast.

DEBAYERING ALGORITHM: The nature of the algorithm used to debayer (demosaic) the RAW samples can have a marked effect on saturation. Among other things, the spectral weighting of R, G, and B is 0.21, 0.71, 0.07 — and if a different weighting is used, saturation can be substantially affected.

What is Gamma Anyway?

Gamma is a curve that is related to the human visual perception curve. Gamma is used in digital images to increase the data density in the dark areas of the image where the eye is most sensitive to changes, thus reducing artifacts like "banding" and noise.

In old analog systems such as broadcast television (NTSC/PAL), using gamma reduced apparent noise in the transmission, and the whole broadcast chain for that matter.

While applying a 2.2 exponent to each color channel (after debayering) is typically close enough, if you are doing image manipulation then the "official" transfer curve has a linearized section which prevents math problems such as an infinite slope at zero. For linear RGB (range 0.0 - 0.1):

Not the answer you're looking for? Browse other questions tagged raw color-correction gamma or ask your own question.

5
Query about gamma correction?
16
What is the purpose of gamma correction in today's screens and how does it relate to graphics and photography?
2
Does an image have an explicit gamma level?
4
How to do precise gamma corrections in Lightroom?
2
Why does editing software not care about colorspace?
1
I have an image that contains a color target, how can I print it in order to get faithful colors?
0
Confused about D50/D65 conversion going from Lab to sRGB color spaces
1
Why does a green product that's been color corrected (with color checker passport) look blue and how do I fix it?
1
DigiKam vs. LibRaw command Output Discrepancy