Who were the Bauhaus photographers and what was their impact on commercial and artistic photography today?

The Bauhaus was a German art, craft, and design school which operated between the World Wars. I was recently at an exhibit of works — mostly paintings, architectural drawings, and sculpture — which had a small selection of photographs and a placard which read:

Photography played a central role in constructing the Bauhaus image by documenting the school's buildings and design objects, but it also served as an important means of pure artistic expression. There was no dedicated department at the Bauhaus until 1929, when professional photographer Walter Peterhans joined the faculty. The medium nonetheless captivated both teachers and students, who drew inspiration from sources ranging from constructivism and avant-garde film to illustrated newspapers and magazines.

The photographs in the collection I saw, however, seemed primarily of interest as documents of the school's buildings and of some of the created objects (as the first sentence of the caption). Online, I found these Walter Peterhans images, some of which are easy to see as related to the aesthetic of many of the Bauhaus painters. For example, this: 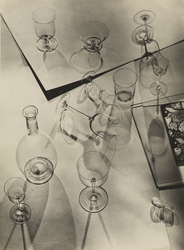 doesn't look so far off from Klee: 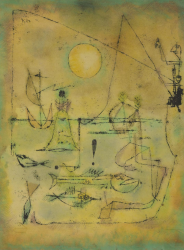 The Bauhaus artists had an enormous impact on design and especially on architecture. Many of them are — well, if not household names, you'd recognize their most famous works if you saw them on a dorm room poster. What about the photographers? Particularly, did their work exhibit new ideas and influence in the technical or artistic world of photography itself, beyond capturing and reflecting the ideals and aesthetic of Bauhaus painters, architects, and designers in other media?

You should look at the work of Moholy-Nagy, while not strictly a photographer he is well known for his experimental use of photography. Even many his non-photographic sculptural works, such as Light Space Modulator, use light and time in interesting and unusual ways. In terms of his effect on the Bauhaus as a teacher, he was important for pushing industrial production as a tool of the artist where the school had been tied to more traditional ideas of individual craft.

There was a retrospective of his work fairly recently at the Guggenheim Museum. There is a catalogue for the show that I'm sure you could get through your local library and some information on the Guggenheim website: https://www.guggenheim.org/exhibition/moholy-nagy-future-present

11
What was the "New York School" of photography?
6
Who was the first to introduce a beauty dish?
5
Who is the photographer of this black and white photo of two female nudes standing over a pile of clothes?
3
What is the precise model and background of this Kodak Six-20 camera with bellows?
34
How was photo data processed and transferred back to Earth from satellites before digital photography became commonplace?
7
What was the Group f.64, and why were they important?
11
What was the "revolutionary" digital camera with infinite depth of field and focus adjustment in post-processing?
6
What was Bob Parent's "Signature Technique," and how is it visible in this (linked) photo?
1
What was the consumer photo printing process in the 80s and 90s?