What was Bob Parent's "Signature Technique," and how is it visible in this (linked) photo?

The New York Times recently ran an article called Is This the Greatest Photo in Jazz History? (paywall (sorry), and a mildly-NSFW mural painting visible in the photo) about a famous photo, taken by photographer Bob Parent, of Thelonious Monk, Charles Mingus, Roy Haynes, and Charlie Parker on a New York City club stage in 1953. The NYT article states:

Mr. Parent developed a signature technique that allowed him to work without flashbulbs, which performers found distracting. It gave his work a dark and intimate feel.

Similarly, the All About Jazz article linked above notes:

The Canadian-born son of a sign maker, Bob Parent was one of the first photographers to regularly work inside jazz clubs. The clubs for many decades did not welcome photographers, particularly because of the disruptive flashes that were necessary in the dark conditions. Parent personally disliked flashes because he felt they could interfere with a scene in its most sensitive moments, such as in the middle of a solo. Early on, he created equipment that cast an ambient, glare-free, spreading light. By the early 1950s, he abandoned the use of flash altogether, having learned to make the most of available light.

Neither of these articles goes into any detail about his equipment and techniques.

What were the equipment and/or techniques that Mr. Parent developed? Are these things that were groundbreaking in the 1950s, but that are taken for granted today? How does the technique reveal itself in the photo that is the subject of the NYT article?

Bob Parent's first camera that he used in the jazz clubs of New York was a 4x5 Speed Graphic. It is also known that when he first started, he used a flash held in his left hand as far off camera as he could reach. Although most photographers who used flash with a Speed Graphic had it attached to the side of the camera, the flash was triggered by an external wire that ran from the shutter mechanism on the lens board to the flash. How far off camera the flash could be used was limited only by the length of the cord.¹ 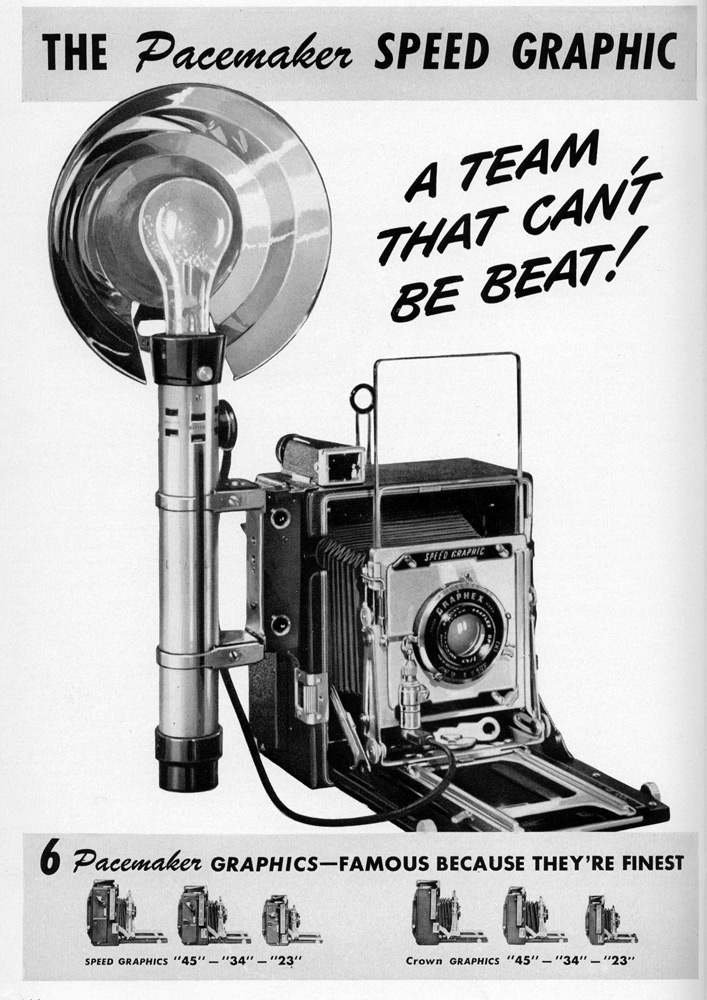 Parent later created a portable constant light source that was less intrusive and more tolerated in the dim clubs. Eventually he was able to shoot with no supplemental lighting whatsoever. But that was much later than 1953, when the photo in question was taken.

The referenced photo was created in 1953, near the beginning of Bob Parent's documentation of the jazz scene in NYC. It appears to have been taken during the time Parent was using flash. Whether flash or constant lighting, an examination of the photo indicates the light source for the photo was much brighter than any ambient light in the room.

WARNING: the following image contains artwork, in the form of a mural of a nude female figure on the wall in the background, that might be considered NSFW. It is presented under fair use for the purpose of education and criticism. To see the image, please hover your mouse or cursor over the area below. 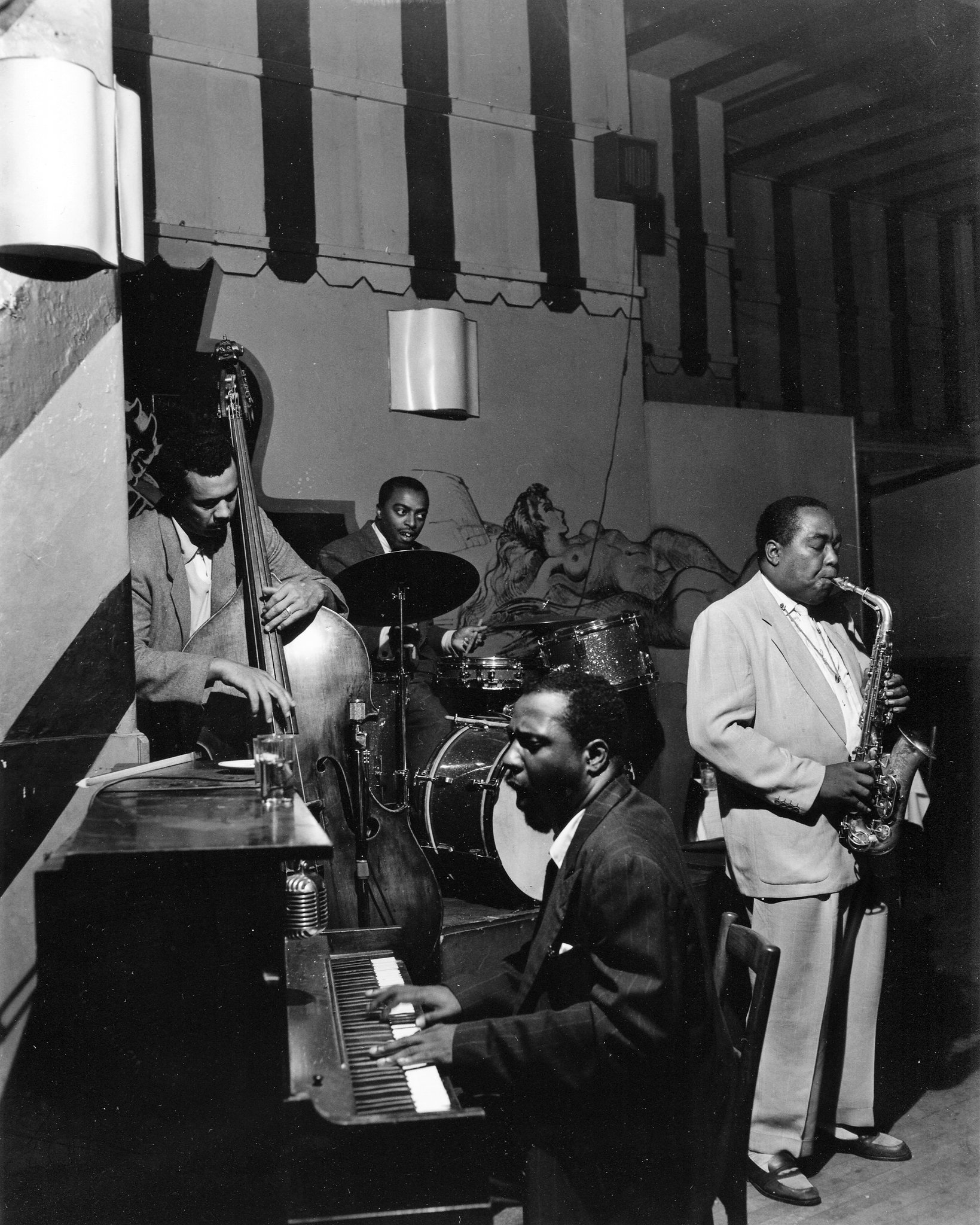 The heavy shadows confirm that there was a single light source above camera left that was much stronger than anything else in the room. No perceptible light is emitting from what appear to be light fixtures. The lack of any audience in the photo suggests he may have been able to get them to pose either before the club opened or after it closed. Or maybe he caught them going through a few bars of something they planned to do before the show?² I've often seen improvisational musicians who haven't regularly played with one another quickly go through the transitions or other key passages of a piece during sound check.

It is certainly true that today we can stretch ISO far beyond what was conceivable back in the 1950s, even with large or medium format film. It is also true that as the technical capability of our recording medium has been raised, so have expectations. We're now routinely expected to catch performers in mid-leap in settings with not much more light. Now, as then, it's up to the photographer to push the technological limits of the medium one is using to capture shots that others can't quite match.

Shots such as this are also still incumbent on having access to scenes by cultivating relationships with performers and those who manage the venues in which they perform.

Then they'll be much more tolerant of your activities than if there is not that type of established trust.

¹ There's a photo of one of Weegee's Speed graphics here with a very long cord that he used to trigger the camera and flash remotely.
² Much of the theatrical work I do is shot at a "dress rehearsal", not at actual performances.
³ Pun intended

This is not a definitive answer, but based on some examination of the photos in the NYT article you linked, as well as a couple of others, here for instance & there is also at least one YouTube short biography (beware: link is a video).

A significant number of the images have dimensions which indicate either they came from a camera which has a 5/4 ratio or they've all been cropped. I couldn't find anything which looked like uncropped 35mm (3/2). So I'm guessing that, at least early on, he was using either a large-format camera (presumably 5x4), or perhaps a 6x4.5 MF camera. The 1953 Mingus-Haynes-Parker-Monk photo also seems to bear this out: it's very close to 5/4 indeed, and it's pretty grainless, especially given the date: either it came from a 5x4 camera or perhaps from MF I think.

(It is clear from the beginning of the biographical video I linked above that he did use 35mm cameras as well, at least at some point.)

And, again looking at the 1953 photo, there is plenty of depth-of-field: if you look at Monk's head and the bass drum he's in front of they are both adequately in focus. This can't have been done with movements which can only shift the focal plane around, but can't increase depth-of-field for things which appear in the same place on the image. And we can guess at the exposure assuming it's not posed: looking at Monk's fingers there is some motion blur but not a lot, so let's say it's no longer than 1/2s.

So, to summarise: this looks to be a picture taken with a medium or large-format camera, and I suspect with a 5x4 camera, with decent depth of field, and a reasonably short exposure, in a club without flash.

Let's assume that he was using film which was rated at ISO 400 or less (I don't know the history of fast films, but I doubt anything practical faster than 400 was available in 1953): TXP say (which I think was still 200 at that point in fact).

What can we say about that? Well at first blush I'm thinking that I must be wrong. I use a 5x4 camera and trying to get that much DoF in a club would be a seriously heroic feat: if this is 5x4 it looks like f/22 or slower. But, well, what could he have done?

So my guess is that, early on (and in this picture I think) his technique was probably being willing to push film, and the development of some lighting system he could drop into a club without having people get cross at him. I would guess that later (when it says he worked by available light only) he started using 35mm and fast lenses, and perhaps still pushing film a bit. It's very possible to take pictures in clubs with ISO 400 film and a f/1.4 lens: I've done this. Looking at other pictures of his he was also willing to print pretty dark, so most of the person is in shadow, which also helps of course.

More importantly than either was being there, of course, and getting to the point where fairly-irascible musicians were willing to let you take their pictures, and then taking good pictures.

Given that cameras will now happily work at ISOs of many thousands, I think most of the technical stuff he did is now pretty obsolete. Being there, taking the right picture, and being willing to print fairly dark so things still look moody, still counts of course.

Not the answer you're looking for? Browse other questions tagged history performance or ask your own question.

4
What process was used to make this glass plate?
5
Who is the photographer of this black and white photo of two female nudes standing over a pile of clothes?
3
What is the precise model and background of this Kodak Six-20 camera with bellows?
33
How was photo data processed and transferred back to Earth from satellites before digital photography became commonplace?
7
What was the Group f.64, and why were they important?
11
What was the "revolutionary" digital camera with infinite depth of field and focus adjustment in post-processing?
8
Who were the Bauhaus photographers and what was their impact on commercial and artistic photography today?
21
Is space radiation a risk for space film photography, and how is this prevented?
2
What technique did Scott Mutter use in his famous photomontage "Untitled (Library)", and what meaning does that approach help convey?
1
What was the consumer photo printing process in the 80s and 90s?