Antelope Canyon Sunbeams - when are they visible?

I'm planning a trip this summer to Upper Antelope canyon and I've wondered the question about when the sunbeams at Upper Antelope Canyon are visible. It would be terrible to go all the way there and find out you missed it by half an hour or a couple weeks. What I really need are precise numbers. Data online this is varied at best, with many tour operators saying to come around the summer months and do midday tours. Here is my documented attempt to find out more precisely.

From the air, the canyon is tall and narrow, running primarily in the N-S direction. I don't have exact detailed dimensions of the canyon, but my best guess from internet sources I can approximate it to around 120 feet tall and 8-12 feet wide.

Now if we allow the sun's rays to run along the length of the canyon, then there is more possibility of them striking the ground. If we say have 30 feet of canyon length for the sun's rays to traverse before hitting a 120 foot high canyon wall, then the arctan of that is now 76 degrees which the sun does reach during the solstice. With 60 feet of canyon length, you now only need a 63 degree high sun, creating more possibilities.

Now what is interesting is that many websites claim the sunbeams are visible during a period of time that skews earlier than solar noon (1220pm-1230pm during the summer months) in Page. Another says sunbeams are visible from 10am-1pm from May through early October. One tour website says 11am-130pm and from mid-March through mid-October. If the path of the canyon was perfectly aligned in the in the N-S direction, then for an equal amount of time before and after solar noon should the sunbeams be visible. Instead angle of the canyon being skewed more towards the NW to SE direction which results in more opportunities in the morning hours which agrees with what the websites say.

What is interesting is that the beams can still be visible around mid-October which means the sun is only 44 degrees high during solar noon.

Therefore, it seems the azimuthal direction of the canyon is more important for letting the sun's light in than the altitude of the sun.

I used Photo Pills app to look at the alignment of the canyon, using the object height as 38 meters (approximately the 120 feet of the canyon's walls) and then having the app draw a shadow. Using this diagram, I can see roughly when does the sun's light reach the bottom of the canyon. If the length canyon is at least long enough to encompass the entire shadow, then my belief is that light can reach the floor as it does so at the point just past the shadow.

For the September equinox 9/21, its a bit less rosy. There is maybe only one time when the beams are visible and its 11:31am, and even then I have doubt about it. This is because the canyon isn't long enough to support the much longer shadows that happen as a result of the sun being much lower in the sky.

You can check my work here:Photo Album of Photo Pills Screenshots

I do think that because the sun takes a similar path in the sky when its X days before or after the solstice, that it should be equally visible on those days, so I'm not sure why there seems to be a skew towards the months after the solstice (one of the websites says May through October).

All this really helped me identify which tours to go on. I was initially planning a 230pm tour which I cancelled. I then planned a 12:45pm tour. I think that is going to be too late. I need an 11am. A 10am tour may be too early if it ends before 1130am.

How does all this look?

It depends if you take the upper or lower Antelope Canyon. I did the lower one which apparently is a bit more tolerant for light entrance. Besides on time of day it also depends on the time of year, as you correctly have analyzed.

In Spring and Autumn the best time will be when the sun is near its Zenith. In summer this will be between 11am and 1pm. In general, the light is great at any time during the day, as it is the reflection of the walls that creates the beautiful colors.

You need to keep in mind that the opening overhead is not exactly above the sandy patches. The curvy walls each have their own unique optimum light position, so your calculations are not fully applicable. There are areas in the canyon that allow for direct rays well before or after the 'optimal' time of day.

Also, all the (professional) images of these canyons show spectacular colors that will only emerge with special lenses and camera positions, and it often is the excess (or lack) of light that provides these unique effects. For the naked eye the canyon is spectacular as well, but your brain will adjust the colors depending on luminosity. 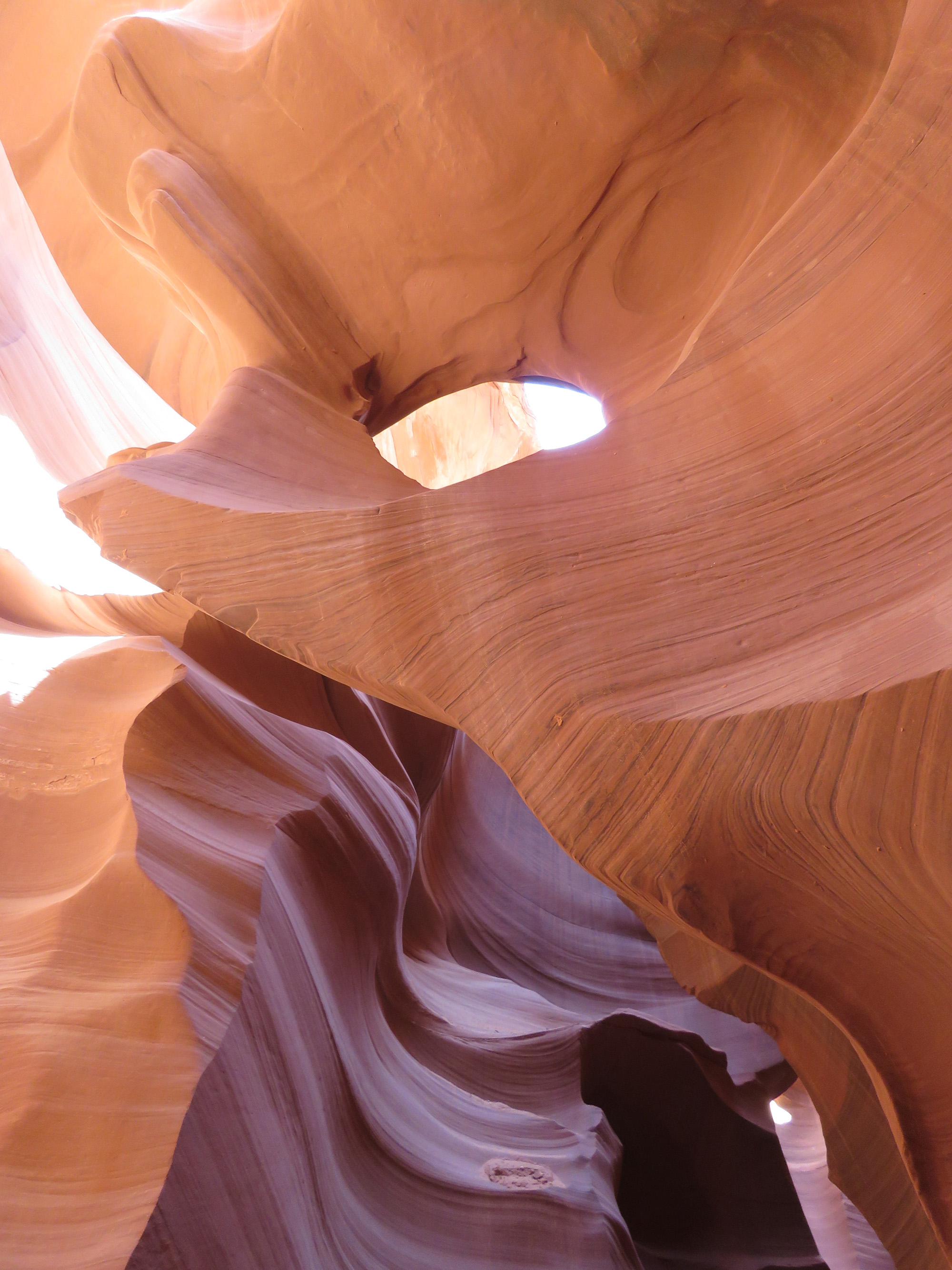 The image above was shot at close to 2 pm local time (lower canyon). Other images that I took around that time still show direct sunlight on the sand.

If your are planning to go there specifically for the photography you will need to find a photographer's tour (at a significant fee) that will allow for some extra time. My guide during the (regular) tour stopped several times to create photo opportunities without other visitors in sight.

A key item that I did not find in your math: The regular tours take about one hour, but the the wait easily is another hour. So if you book the tour at noon (as I did) you will only be in the canyon at 1 pm. This was early May (2017). The wait may even be longer in high-season. See pic below. Bring sunblock and water. 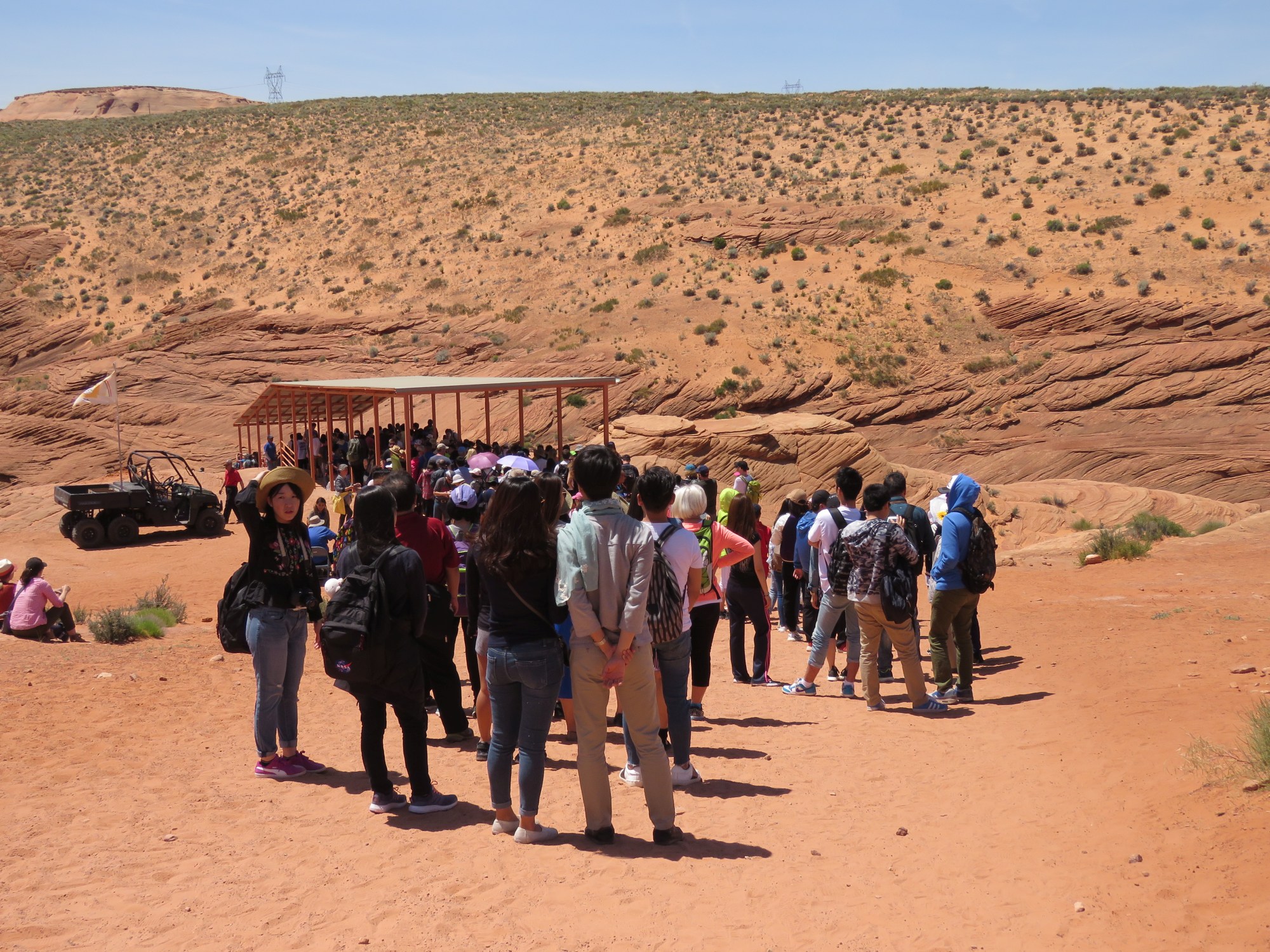 Further keep in mind that there is a one hour timezone shift if you move from Utah to Arizona. Arizona does not observe daylight saving time, so make sure you include that in your math.

Rather than shooting pictures at the touristy Antelope Canyon (nevertheless an unforgettable experience) you may head for the nearby Waterhole Canyon. After getting your (inexpensive) permit from the nearby Navajo reservation HQ (Leechee Chapter) you have all day for this long and narrow canyon with similar setting and, unlike the hundreds of fellow visitors at Antelope, you'll probably see no more than a handful of other visitors, with many hours to catch the best light. Of course this will change when photography magazines start showing spectacular images of this canyon as well. Bring water and lunch and check for snakes at sunset and dawn. You can find some of my Waterhole Canyon images, including 360 degree images, on Google maps. You may also check Maps for images of the Upper Antelope Canyon to find out the most optimal time of day.

Last but not least: The Wave is a nearby spectacular area, with only few dozen visitors allowed via lottery. You may want to give that a try as well. My personal favorite, with very few pictures ever published: the off-road Cottonwood Canyon road between Kodachrome State park and Page. This 'dragon's back ridge' near Paria is unique. I can't wait to go there again. See Google Earth image below. 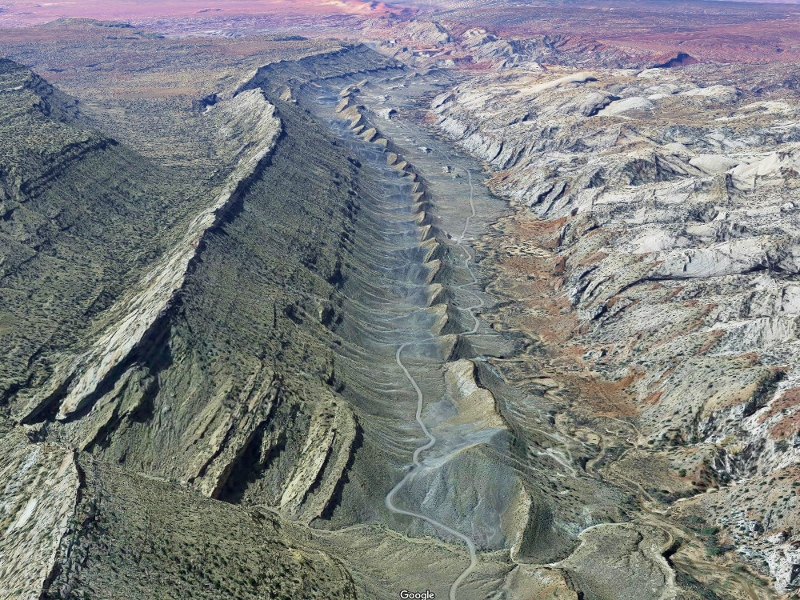 16
How can you avoid/minimize lens flare when shooting into the sun?
11
How do I effectively photograph when the sun is in the frame?
5
Why and when to use a lens hood?
5
How can I make sun beams more visible in post-processing?
1
How to make a shot when light comes from outside and subject is moving (Cannot use HDR)
5
Are there industry standards or specs for image sensor resistance to damage from intense light?
3
What is the problem if sun is behind me? What does that signify? Where should the sun be when I take photos?
5
Can the sun damage the sensor on a mirrorless camera?
4
Visible sun beams - what are the conditions for them to appear?
0
Can it damage eyes and camera when taking photo from Nikon Coolpix B500 during 90-95% solar eclipse?