Why does color hue change on different exposures?

When shooting with long exposures (multiple to tens of seconds) I noticed that in some cases colors in the resulting photos change hue. This was on Canon EOS 1100D, but I've also seen such a problem with some other cameras like Canon EOS 40D and 60Da. This even happens when only aperture is changed, without changes to shutter speed. 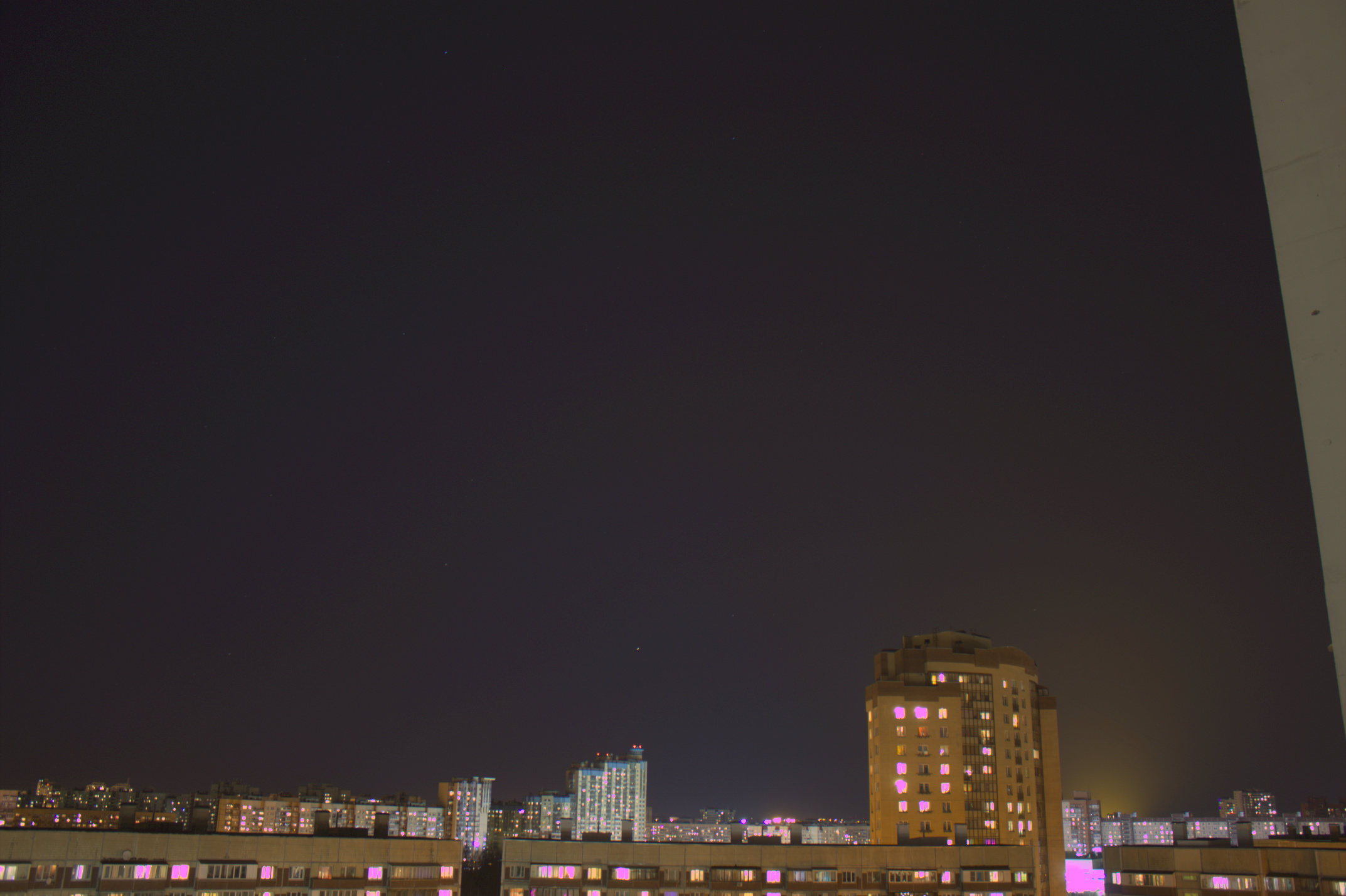 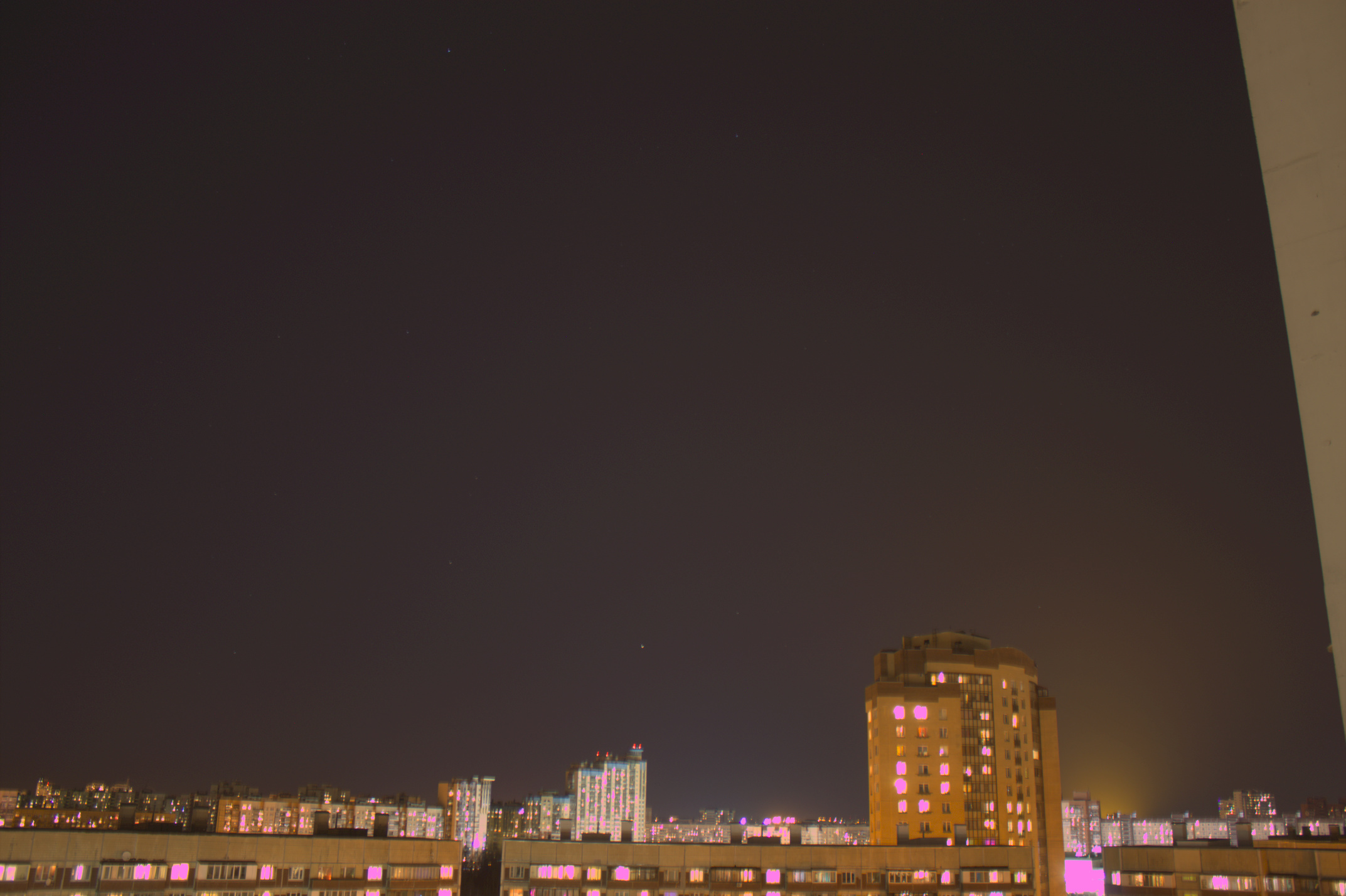 If you open them in two tabs and switch between them quickly, you'll notice that, aside from brightness, they also change hue: the first one is more bluish, while the second is more purplish.

To make it easier to see that the whole sky changes hue, not only near the sources of light, here's the same pair of photos, but with colors normalized so that R+G+B=const: 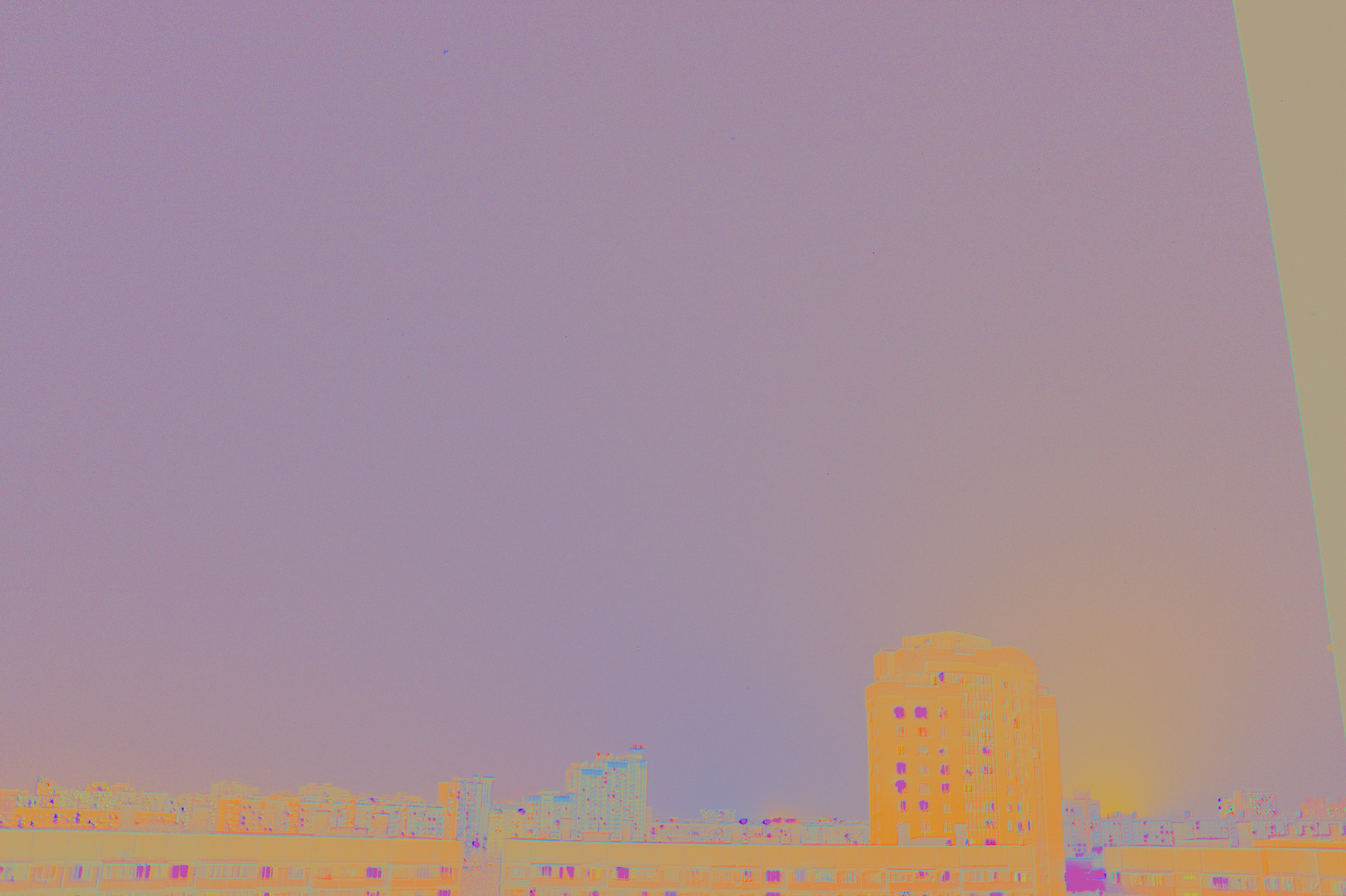 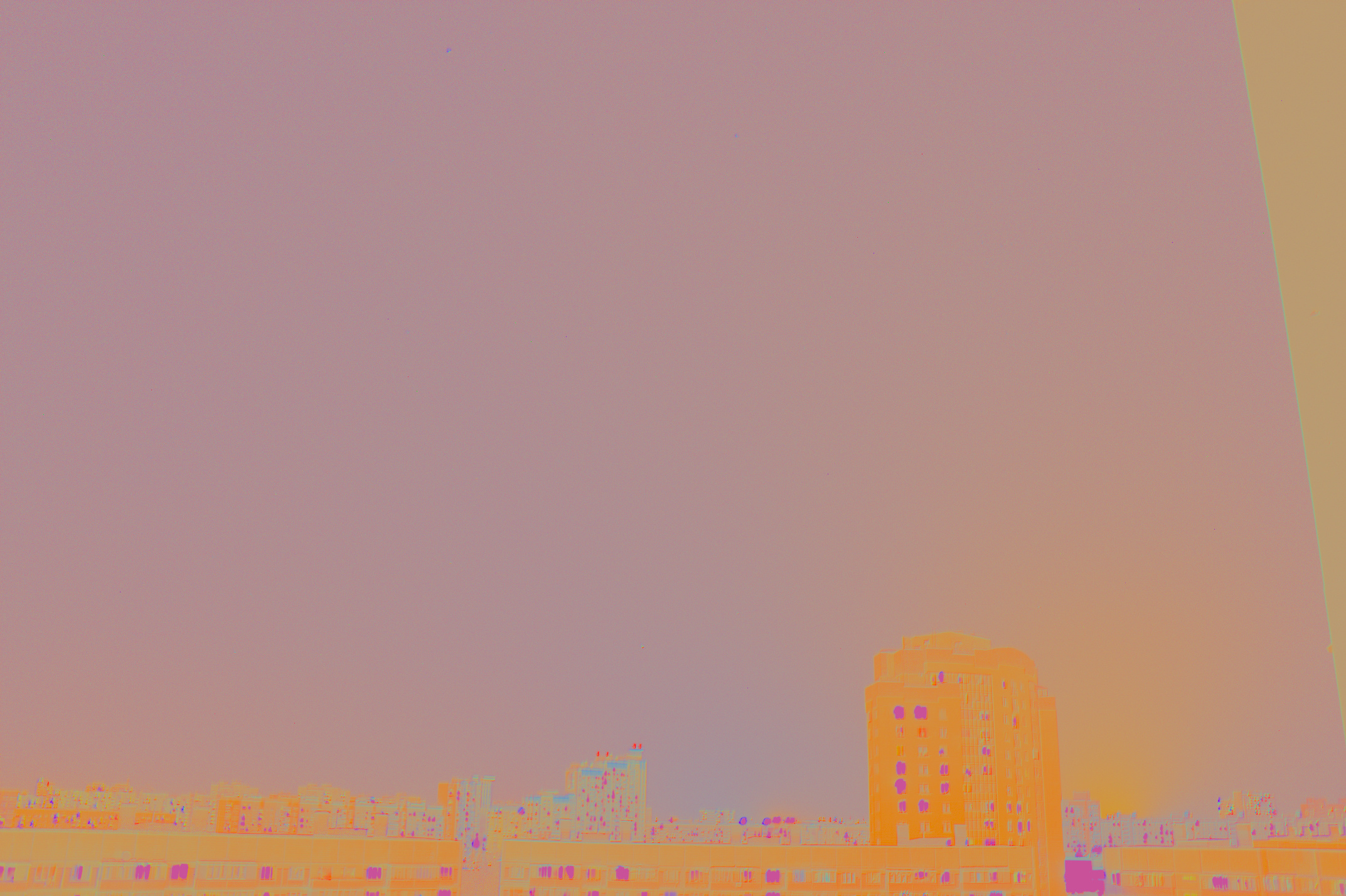 What is the reason for this? Is it a known problem with long exposures? How can I compensate for this to get some continuity of hue for time lapse animations where scene brightness dramatically changes in time (e.g. twilight) thus requiring different exposures? (By continuity I mean continuous change of chromaticity regardless of exposure.)

How can I compensate for this to get some color continuity for time lapse animations where scene brightness dramatically changes in time (e.g. twilight) thus requiring different exposures?

When linear raw values are converted to gamma corrected values not all are multiplied by the same amount. A curve is applied to mimic the way human vision responds to varying levels of brightness. It's basically logarithmic, but there are "shoulders" at the brightest and dimmest values that get flattened out in the opposite direction from the main logarithmic curve.

When you shift the raw values recorded by the sensor higher by exposing longer, after raw conversion not everything in the scene will be equally brightened compared to the darker image because all of your values will fall at different points on the S-shaped curve applied in gamma correction. The midtones will be more or less all boosted by the same amount. But there are very few midtones in your example photos. Almost all of the values are bunched up on one end or the other. The darker values will be brightened more, comparatively, in the longer exposure than the midtones. The midtones will be brightened more than the brightest values that approach but do not reach full saturation (those already blown out can't be any brighter than they already are in the darker image).

Answer before the OP clarified that these two photos were not taken during twilight, as implied in the question:

Short answer: you can't when mixing two light sources that are that different in the type of light they output and one is staying a constant brightness and color while the other is dimming and shifting in color.

Even if you used identical white balance settings to develop both images, one would expect the color to shift as more of the light in the second image is from the artificial light sources and less of the light is from the sky, which is also changing color as well. This is because there's more light from the artificial sources in the second image, due to the longer exposure, and less of the total light is from the sky.

It appears that I was actually doing (unknowingly) "as shot" white balance correction while processing the raw files. Namely, I was using the cam_mul coefficients, which do change from image to image (they represent white balance of the embedded JPEG, in particular), and the particular camera I used to do the photos (I have two of the same model) had WB mode set to Auto, which I forgot to check when shooting.

Behavior of RawTherapee added to my confusion: when I chose "Neutral" processing profile, I supposed that it would reset to some consistent, shot-independent, settings. But it appears that White Balance Method setting is still "Camera", leading to the same discrepancy I got with manual LibRaw-based conversion.

Now I've tried replacing my usage of cam_mul with pre_mul (daylight WB), which seems to be constant regardless of the scene (at least it's the same for the two problematic photos in the OP), and the hues are now the same. Similarly, choosing the same white balance method in RawTherapee gives matching hues too.

I've seen cold-start issues.... go out into the cold night with a cold camera, heat the CMOS with a long exposure, first cold-CMOS image has different response parameters vs next exposure that starts with a warm CMOS.

But who gets long exposure settings right on the first try, LOL? So we're usually not in a position to notice.

For a similar reason why the lights in this question Why did this image turn out darker? change their appearance:
The changed exposure time altered the ratio of (near zero) ambient light from the dark sky to the warm haze of artificial light.

In the second picture the artificial light is much more pronounced and due to haze affects the sky as well. Which is why the effect is almost unnoticeable at the top of the photo, far away from the skyline.

As you know, this camera sports a CMOS imaging chip. The heart of this chip is millions of tiny photosites. This design features lots of sophisticated functions. Each photosite contains converters that read out the amount of charge induced by photon hits and transfigure the charge to a voltage. Additionally each site contains an amplifier to boost the signal to a usable lever.

In a perfect world, each photosite would function exactly the same as its fellow sites. However each will react to light slightly differently and each amplifier operates with slightly different efficiency. Heat enters into the mix. The longer the exposure, the more the chip heats up, and this augments the disorder.

Engineers design cameras with the goal, “make a faithful image”. This has never happened -- be it a digital of a film camera.

P.S. --- In the photofinishing industry we often found that automated color printers often induced a slightly different hue when reprinting a negative previously printed using an identical setup. The hue differences most often were traced to microscope differences in the placement of the negative in the negative gate. In other words, the sensors that report color balance send different data induced by just a slight repositioning. Perhaps not the same thing, but perhaps your hue variance is influenced by changes in positioning and subject fluctuations like neon lights flickering etc.

Not the answer you're looking for? Browse other questions tagged exposure color timelapse or ask your own question.

6
Why did this image turn out darker?

1
How to shoot the sequence of adjusted exposures wanted for a ColorChecker?
3
Why does my white picture have a blue hue? And brighter/darker horizontal waves?
1
What white balance should be selected if the photo is supposed to completely surround the viewer?
1
Why are saturation and color very different when I open my JPEG photos in different programs?
3
Why does histogram not show color of object more strongly?
0
Timelapse color flickering
3
Why would a camera change colors on the image when producing JPEGs?
9
Why is the earth not overexposed in this star photo from the ISS?
0
How to match color range in two photos when colorizing (hue, saturation)?