Why did this image turn out darker? 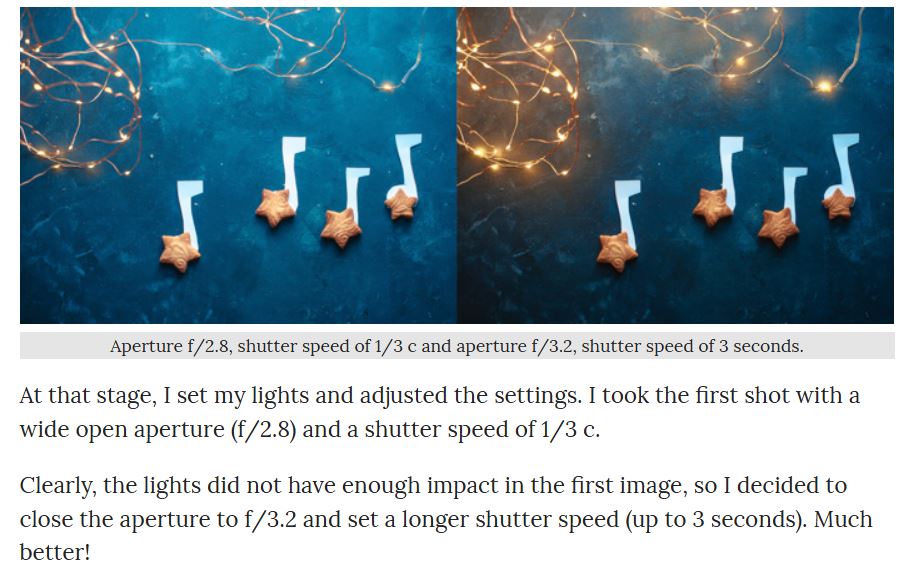 She says she went from f/2.8 and 1/3 of a second to f/3.2 and three seconds exposures. It seems the difference in aperture (not even a doubling in light intensity) would not compensate for the increased light intensity of the ten times decrease in shutter speed. Is this correct?

So, what you have here is a mixed lighting situation. The background and star notes are being lit via flash (check out their shadows. Nice and soft and from top to bottom. The main bulb cluster is on the left and yet it has no impact on those shadows) and the bulbs themselves are being lit...by themselves :-).

(There's probably a speedlight with a soft box on it or some other softening light modifier and it's placed north of the shooter, aiming down. When looking at lighting, always look to the shadows to get an idea of where it came from and how soft it was)

In these types of images, the flash is controlled by:

The amount of light captured by the bulbs is controlled by:

So, in changing the exposure from f/2.8 to f/3.2 — the shooter brought down the amount of light processed from the flash (you can see that the highlights on the notes are less hot in the second example). They brought it down by 2/3 of a stop.

See technique 2 in my answer here. It's a similar mixed lighting shot and another idea for you to test mixing flash and bulbs. Mixed lighting is a whole subset of lighting technique, there is a lot to it, but damn if it isn't a lot of fun.

We don’t know exactly what 1/3 C means but we can surmise it a typo and should read 1/3 of a second.

Assuming this is true, how come the second shot, using a shutter speed of 3 seconds, is not overexposed? This might be a mistake, however, the text of the example you cited reveals the author used an electronic flash as the main light source.

In your mind, the difference between 1/3 of a second and 3 seconds is 9X. True, but this is photography- think of it as 3 stops --- additionally, an electronic flash outputs a flash of light that averages about 1/1000 of a second in duration. The key to understanding the difference in these two shots ---- the flash contributed equally to both images. It flashed and then extinguished. The difference in exposure is simply the accumulation of the ambient light, not the flash. We don’t know much about the ambient light except to say, it was likely feeble. Stopping down the lens reduced the exposure.

Edit: reading the complete article in detail over lunch rather than the section in question and skimming the rest, the main source is a speedlight, which I missed while searching for more uses of 'flash' from the start of the article. - See Hueco's for the more detailed answer of what's going on with the dual exposure.

Possibly a typo in the article (Photography websites aren't exactly renowned for rigorous peer review or anything.) or they've glossed over some additional post work.

The 1st image seems to have exposure compensation set to 1/3 to brighten it. (1/3c) Turning the compensation off makes a darker image. Now going to a smaller aperture means a longer exposure which means the Xmas lights have more time to contribute to the ambient portion of the light. The brighter xmas lights makes the background even darker for the same full image meter exposure. The longer exposure also means less flash is used and thus even bigger differences in bright ambient Xmas light and flash lit blue background.

Not the answer you're looking for? Browse other questions tagged flash exposure lighting off-camera-flash or ask your own question.

38
How to reproduce a photo with silhouette and bokeh?
3
Why does color hue change on different exposures?

3
Adding flash makes picture darker. Why?
4
Why do pictures turn out dark when I shoot with my external flash?
1
Why does this happen: objects which are surrounded by brighter objects appear darker?
2
Why did my lacrosse game pictures come out so dark?
3
Why did my Yongnuo YN685 speedlight stop working after firing it off camera?
1
Why did my 35mm film turn out muddy?
5
Why are my flashes not putting out full power in HSS?
2
Why did my 35mm scans come out with this white grain?