recently I came across really strange issue: A non-original replacement battery (EN-EL14a) for my DSLR (Nikon D3300) I bought about year ago, suddenly stopped working. In particular, when inserted into the body, I get message: This battery cannot be used. Use battery designated for this camera.

I'm pretty shocked, as it worked flawlessly untill now, BTW I'm shooting a wedding in a couple of weeks too :D Is there any reason for its' behaviour and possible fix please?

Image: original battery on left, 3rd party on the right side 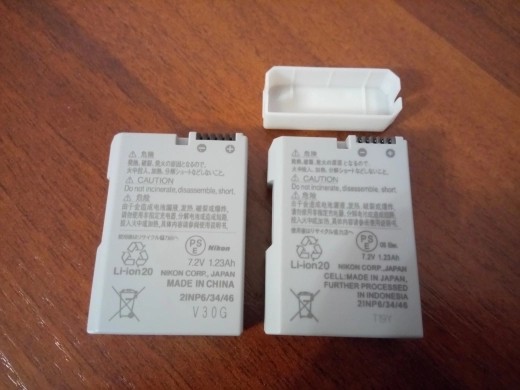 Nikon has made an effort to stop third-party batteries by integrating a chip into the battery which reports some identifier. It's clearly not very strong cryptographically, as these clone batteries exist and report false information.

Now, I'm a very strong believer in your right to use a battery like this — it should be an option. But, lithium batteries can be dangerous. You know the announcement they now give on planes about how you're not supposed to try to adjust your seat if you've dropped your phone? The concern is that moving the seat might put pressure on the phone, causing catastrophic failure. This is no joke — the US just banned lithium batteries as cargo on passenger aircraft.

Check out this teardown of one Nikon-clone battery, which reveals very dodgy construction.

You might by comfortable buying third-party batteries with a reputable name of their own. Look for a real warranty and perhaps some good reviews from people who used that warranty. I'd particularly avoid batteries like the one in your photo which go out of their way to look very close to the original battery in markings, lettering, and logos. Yours clearly has differences, but it says NIKON CORP, JAPAN, which is... clearly a lie. This indicates a willingness to deceive on the outside — which doesn't bode well for the inside.

Overall, I find it much better for my peace of mind to just bite the bullet and pay the markup for the official-brand battery. Sure, there's probably some price gouging going on, but on the other hand, there really is a quality difference, at least vs. many budget clones from, as you describe, a "chinese e-shop".

See Should I buy an original manufacturer battery, or is a generic brand OK? for more on this

Based on discussions threads over the Internet there are two possibilities:

Unfortunately there is no fix for the first issue. The second issue can be fixed if the battery is still under warranty period

As I understand it, batteries with counterfeit authentication chips usually fail because the counterfeit chips aren't designed to work correctly when the battery falls below a certain voltage threshold, that threshold is too high relative to the point where the camera stops drawing power, and the chips fail to reboot when the battery charges back up to a level where they can function properly. As a result, these third-party batteries often work fine until you run them all the way down to the point where the batteries shut off, and then they never work again.

As for fixing it, in theory, you might be able to crack the battery open, unsolder the wire from the battery to the controller board, charge the cells externally if necessary, and then resolder the wire, repeating until the camera recognizes it. But even then, there's no guarantee that it will ever come back from the dead, because the chip itself may just be fried. You're probably better off replacing it.

Ironically, this could all be trivially fixed by adding a microswitch to disconnect the authentication board from the cells. I'm tempted to try it, given how many of these "dead" batteries I have lying around (mostly batteries that came with third-party grips). But I digress.

Not the answer you're looking for? Browse other questions tagged nikon battery nikon-d3300 or ask your own question.

46
Should I buy an original manufacturer battery, or is a generic brand OK?

2
3rd party lenses - compatibility & value
1
Nikon D5100 Stopped Working?
11
Does Nikon offer something like an API for developing 3rd party hardware?
2
Are third party battery grips good enough?
0
Is there a 3rd-party wireless slave for Nikon SU-4 triggering?
0
Nikon D200 battery woes
1
Nikon D5100: should I avoid the firmware update if I want to use 3rd party batteries?
0
Is it safe to use a third-party replacement battery charger?
18
My Canon EOS 5D Mark IV is asking if the inserted battery is original or not. What are the implications of my answer?
2
My Canon EOS 500 Film Camera has all of a sudden stopped working