What is this strange light in photo?

I found a picture from my camera archive 2012, which I need explanation about. It looks like either something happened to the camera or a certain light was captured. 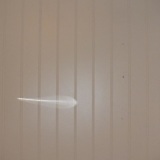 It looks like a caustic, a shape that is produced by refraction of bright light at curved surfaces, most prominently when curved in more than one axis. Glasses filled with a clear liquid frequently show such effects, but even an empty drinking glass or bowl can do so.

To me it does not look like a lens flare at all. Most importantly you can see the shape conform to the recesses in the wall or ceiling.

Addendum: It might be produced by reflection from a strongly curved surface as well.

This looks like flare from the lens. This happen when the light source is close to the angle of view of your lens.

Lens flare refers to a phenomenon wherein light is scattered or flared in a lens system, often in response to a bright light, producing a sometimes undesirable artifact within the image. This happens through light scattered by the imaging mechanism itself, for example through internal reflection and scattering from material imperfections in the lens. Lenses with large numbers of elements such as zooms tend to exhibit greater lens flare, as they contain a relatively large number of interfaces at which internal scattering may occur. These mechanisms differ from the focused image generation mechanism, which depends on rays from the refraction of light from the subject itself.

Flare manifests itself in two ways: as visible artifacts, and as a haze across the image. The haze makes the image look "washed out" by reducing contrast and color saturation (adding light to dark image regions, and adding white to saturated regions, reducing their saturation). Visible artifacts, usually in the shape of the lens iris, are formed when light follows a pathway through the lens that contains one or more reflections from the lens surfaces.

From the observation of @xenoid it can be also caused by water drop on the front element of lens.

Not the answer you're looking for? Browse other questions tagged raw or ask your own question.