How do I fix the color in this photo using Darktable to match the out-of-camera JPEG?

I'm trying to learn to use Darktable effectively.

That's why over the weekend, in the middle of a massive cleaning and organizing task at home, I took a minute to shoot this compositional disaster of a photo:

(I'm not attempting to make a good picture out of this. I don't take pictures this way. I just saw that this pile of junk and blankets had good color contrast and detail that I could use to play around with while learning Darktable. It was a case of "Hey, there's a thing." click "Back to work.")

Anyway, I captured in RAW+JPG. The RAW exported from Darktable is on left, the from-the-camera JPG is on the right. I played a little with sharpness and highlight/shadow modules. I played a lot with color tools, but I couldn't make the colors turn out right. The color of the red bin in the camera JPG is pretty much spot on, and this is where the color problem is most obvious to me. The colors seen in the version on left is as it appeared when I imported to Darktable, with no color correction tools in use.

I also see that the purple blanket is a lot more saturated in the version on the left.

How would I go about correcting the color of this picture in Darktable?

Please nobody tell Mrs. Blanston that I posted a picture of our basement clutter on the internet.

Edit (x2): I'm not confused about the difference between RAW and JPG. In this case, I'm using "RAW" as shorthand for "the JPG file which was exported from Darktable after it was imported as RAW and Darktable's default color mapping was used to render, with none of my (unsuccessful) manual color correction included," and "JPG" as shorthand for "the JPG as rendered by the camera."

While darktable is an increasingly powerful piece of software, one of its rough edges is the fact that it doesn't try very hard to produce a good default "vanilla" rendering of the RAW files from the vast array of cameras that produce such files (understandable, being an open-source project with limited volunteer resources). By default, it applies a "base curve", usually according to brand of camera (although a few camera-specific curves are included), then pushes the results through a camera-specific color matrix derived from Adobe DNG conversion.

In the real world, there are a couple of issues with this: manufacturers release different cameras with different sensors (especially over time), so applying base curves based on "maker" is over-simplistic. The bigger problem is that applying a log curve ahead of the color matrix seems to not use the color matrix as intended; piping linear data into the matrix and applying the curve later in the pipeline makes more sense. (UPDATE: It looks like this will be getting fixed in the 2.8 release.)

In light of this, the tool darktable-chart, using a shot of a reference target, produces a tone curve setting, which is applied later in the pipeline. It also uses the color look-up table module to further map color from the camera matrix to the reference. This process involves some effort, but once you have a basically "sane" rendering that you like as a starting point, you can set it up as the default for imported images using auto-applied presets. It might be worth searching/asking in appropriate forums about your particular camera (or closely related one) to see if someone has already done the work (for instance, users of 16MP Olympus cameras, see here).

If you're not interested in messing with charts or emulating camera rendering (or even "reality"), but just want better behavior from the various color tools, you can just disable the base curve module and adjust thecolor look-up table and tone curve modules by hand (or try the newer filmic module).

By way of sample results, here are some shots of an inexpensive Wolf Faust IT8 chart from an Olympus camera... first the default darktable "base curve" rendering: 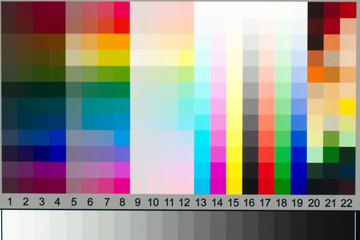 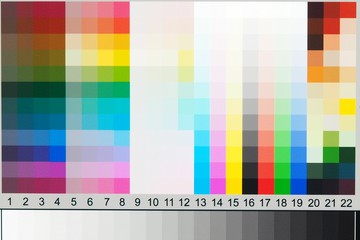 ...and the default result from darktable after profiling with darktable-chart: 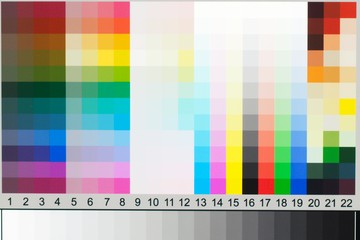 Out-dated documentation for darktable-chart states that it uses the "base curve" module to produce the log curve, but this is no longer the case (unless you have an old version of darktable... don't use old versions of darktable).

Also, for the specific purpose of using a camera-processed JPEG as the reference (as opposed to the reference values supplied with a target) the calibrated accuracy and illumination of the actual color patches is less important, since the "reference" is literally the same scene after additional processing. The quantity is more important, so even a cheap IT8 chart is probably better than a "checker"-type target with few colors. Some discussion or tutorials about darktable-chart may not clearly distinguish between the two cases, so apply common sense as needed.

I also found that setting darktable-chart to use the maximum number of patches for the CLUT gave the best results (no suprise there), and that the results became "less-good" fairly quickly when decreasing the number. The implication for CLUTs with more patches is that they're more computationally "expensive", so the trade-off may be worth it if you're using darktable without OpenCL support.

1
Where do I turn to learn how to process images effectively?
1
Darktable: apply camera's filters, lens correction and crop by default in darkroom mode

7
How do I get accurate color when taking a photo of an LED?
0
How do I demosaic my photos using Darktable?
13
How to edit my RAW photo to make the stars come out more?
1
darktable "lighttable" view: how to show only one of each JPG or raw image in a directory?
5
Dealing with RAW + jpg collections in Darktable: I only want to export processed RAW
4
How to create smooth transition between styles in a time-lapse using Darktable?
5
How to smooth gradient of an overexposed sky on a raw file?
1
How do I batch apply sidecar files to the corresponding photos by filename in darktable?
2
Why don't the values given by Argyll's scanin match what I see in darktable or Gimp
1
RawTherapee/ART: How to match these warm colors from the embedded JPEG?