How to create diagonal blurring and smoothing effect?

How is the diagonal blurring and smoothing effect in this photograph achieved? I know it was taken on an iPhone (by photographer Karen Axelrad) with a shutter delay app. What post process creates such a look? 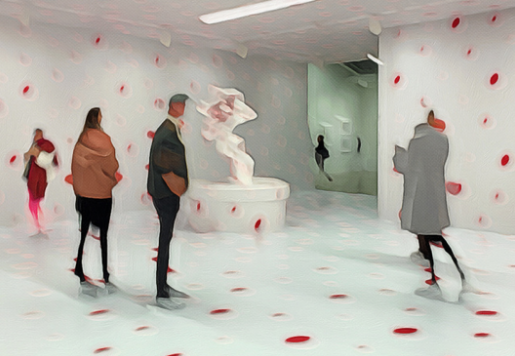 I notice 2 things about this image that stand out. It's not clear if they're the same 2 things you're seeing, but what I see is a slight diagonal blurring, and a smoothing effect. The diagonal blurring can be achieved in-camera by moving the camera during a long exposure. (In this case, "long" could still be a fraction of a second, but enough to get just a little motion.) It could also be done in post using a Directional Blur (sometimes called "Motion Blur") filter. It performs a blur along a line.

The smoothing effect looks to me like a median filter. A median filter smooths out similar areas while preserving sharp edges.

13
How do I achieve this post-process effect?
42
How does one create the Dave Hill effect for portraits/action shots?
5
How do I get this fashion photograph effect?
40
How to get a miniature effect on pictures without special equipment?
5
What is this effect called and how can I post process my photos to get this effect?
4
How can I tell what equipment and lighting setup was used for a studio portrait?
20
How to I get the Instagram “Lux” effect without using Instagram?
8
How can I get a lot of detail in the face, skin as seen in this poster for The Martian?
4
How can I take portraits in the style of Charles Hildreth?
3
seen on NYTimes - How to create this look for high-contrast sunshine images?