What is the point of the infrared focus markers?

I am talking about the red values that comes after the infinity value. Why do they exist and how do you use them properly? 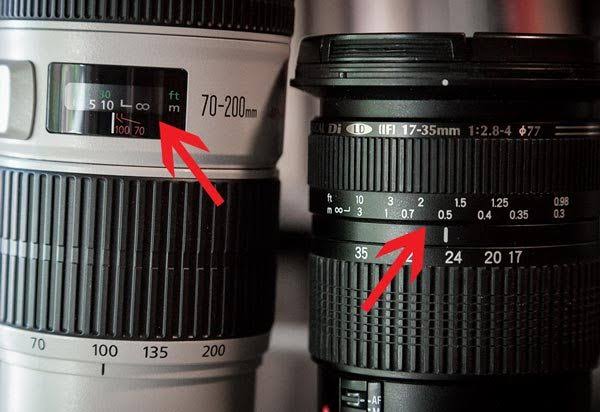 Lenses may have different markings, which include:

The infrared index corrects the focus setting when using monochrome infrared film. Focus on the subject manually, then adjust the distance setting by moving the focusing ring to the corresponding infrared index mark.

Because each color comes to a focus at a different distance from the lens, the size (magnification) of image for each color will be different. The longer the wavelength, the greater the projection distance (lens to image), and the larger the image will be.

This phenomenon is called “Chromatic Aberration”. Hat’s off to John Dollond, an optician, in 1757; he configured a lens array consisting of a strong positive lens made from flint glass and a weak negative lens made from crown glass. This combination mitigates but does not eradicate chromatic aberration.

His lens creation is called an achromatic lens (without color error). In this design, the red image and the blue image come to a focus on the same plane. Lenses that are not well corrected for chromatic aberration display a color fringe that outlines the rim of objects. This fringing is due to the fact that the total image is comprised of an array of different size images. The longer the projection distance -- the larger the image.

Camera lenses are not usually corrected for the extra-long throw of infrared because mostly we image in the visual range.

If we image in the infrared range of frequencies, these images will be out-of-focus unless we manually make a correction. Hence, infrared has its own focusing index marked on the lens barrel.

The 70-200mm lens shown has two infrared indices, one for 70mm and one for 100mm. Since IR filters block visible light, the markings are used for manual focus using the range scale rather than the viewfinder.

As far as I know, those markers are related to infrared light. Because infrared have longer waves than visible light, lenses need different markers when you take photos for infrared photography.

Not the answer you're looking for? Browse other questions tagged focus infrared or ask your own question.

24
Why is infrared light's focus point different from that of visible light?

11
Are infrared DSLR conversion companies safe? What about DIY infrared conversion?
15
What is "infinity focus"?
1
What techniques are there to get focus and/or lock exposure other than center, half-press, and recompose?
8
Infrared Photography - How to set White Balance?
15
Why don't most cameras use infrared for focusing?
3
What settings affect how the focus points are displayed for my 7D?
2
What are the advantages of an 830nm infrared filter, in comparison to 720nm?
8
How was this High-Resolution Short-Wave Infrared image captured?
3
How do different colours look in Infrared Light?
2
Nikon D3100 converted to Infrared only takes red pictures