How does the viewfinder overlay work?

I know how the focus points are painted on the mirror but where do the "signs" come from?

How are auto focus points are illuminated red in Canon 1300D?

Where and how are the shutter speed numbers etc shown on the bottom of the viewfinder?

Is there an super small screen under the DSLR mirror where auto focus indicators and f stop number etc indicators are located?

I would love to see images and explanations.

I know how the focus points are painted on the mirror..

Not really, because I've never seen focus points or anything else (intentionally) painted on a reflex mirror. It would be out of focus. Technically, those that do it the way you think you are describing etch them onto the focusing screen, which is located in the roof of the mirror box.

But other cameras now use translucent thin LCD overlays to display information inside the image frame part of the viewfinder. The red dots can be projected onto the apparent location of the focusing screen (a/k/a the view screen) as seen through the viewfinder from beside or above it in the prism housing. The information on the edges around the image frame can be displayed using a variety of methods. Old film cameras actually had mechanical needles in there that displayed metering information. Most of it now is done using LCD or Electroluminescent displays.

From the Canon EOS 7D review at The-Digital-Picture

It's not clear if that technology has filtered down to the Rebel/xx00D series even today, much less by 2016 when the EOS Rebel T6/1300D was introduced. Based on an image I found of the 1500D's viewfinder, it probably has not. All of the information shown is possible without an LCD overlay. The Rebel Txi/xx0D series does appear to now use transmissive LCD technology in the viewfinder.

Is there an super small screen under the DSLR mirror where auto focus indicators and f stop number etc indicators are located?

This camera cutaway (not your EOS 1300D - it's an Olympus E-400 - but many other DSLRs are similar) shows an information screen (circled in yellow) which emits light that is projected by lenses (circled in red) through the prism and which ultimately appears to be below the bottom of the focusing screen as you see it in your viewfinder: 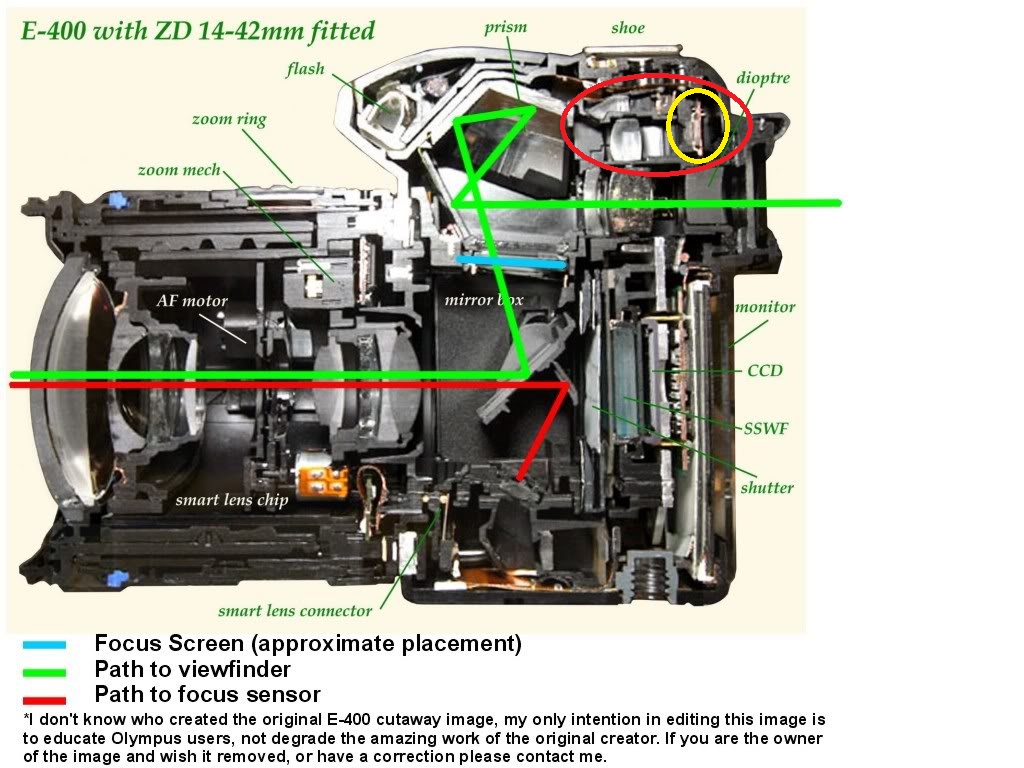 Some cameras use a hybrid of both methods: 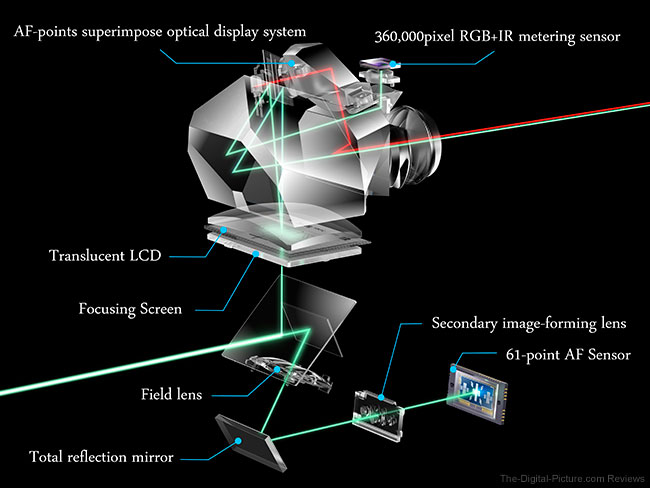 This is answered in detail in another post: How are the red focus point indicators displayed on a DSLR's focusing screen?

However, all of the DSLR cameras I am familiar with (OVFs) use an overlayed display in a manner similar to the image Michael posted. I updated that image to better explain how that works (some cameras use separate mirrors as shown in the linked post). 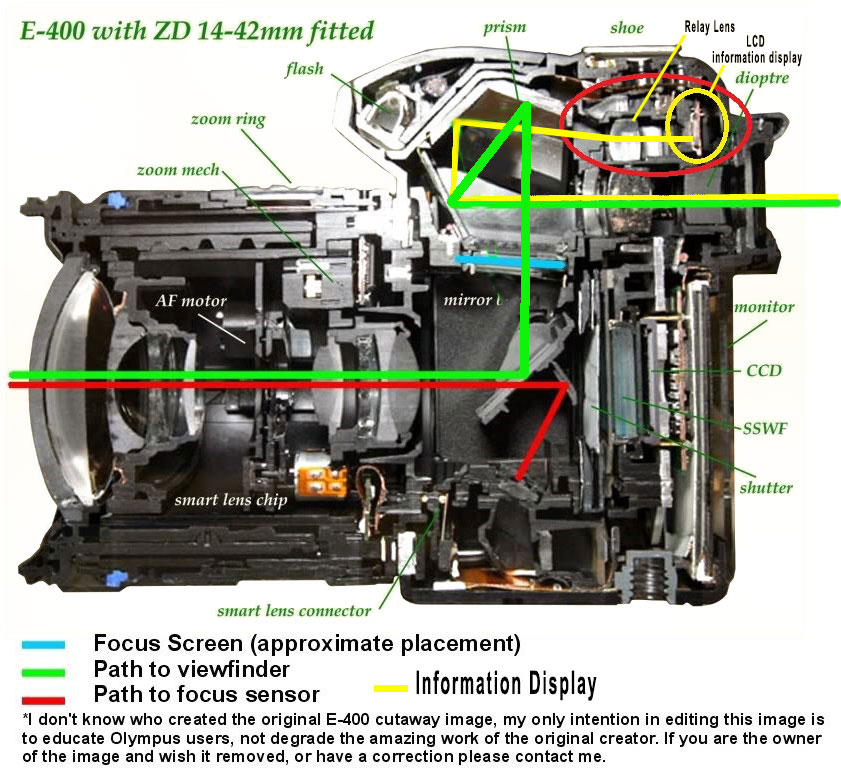 In these cases the information is not being projected onto the focus screen.

Not the answer you're looking for? Browse other questions tagged dslr viewfinder optical-viewfinder viewfinder-indicators or ask your own question.

17
How are the red focus point indicators displayed on a DSLR's focusing screen?

7
Is there an interchangeable-lens compact with an optical viewfinder?
17
How are the red focus point indicators displayed on a DSLR's focusing screen?
10
What are the technical differences between using a DSLR viewfinder and live view?
5
How does an electronic viewfinder work?
2
Why isn't my Fuji X100S optical viewfinder displaying an overlay?
2
Can slightly misaligned focus points and focus screen result in focusing issues?
4
Donuts in the bokeh through the viewfinder of Canon 6D
0
5D Mk III Viewfinder Issue - How do I get a completely clean viewfinder and remove the dashed circle?
6
What are the advantages and disadvantages of an electronic viewfinder vs. a DSLR's optical finder?