How can I remove stuck film from a Praktica Nova I?

I recently used a Praktica Nova I for the first time, took all 36 pictures and realized that I loaded the film incorrectly. As you can see from the manual screenshots, one is supposed to insert the film into the take-up spool (22). Instead, I inserted the film to the transport sprocket (21). 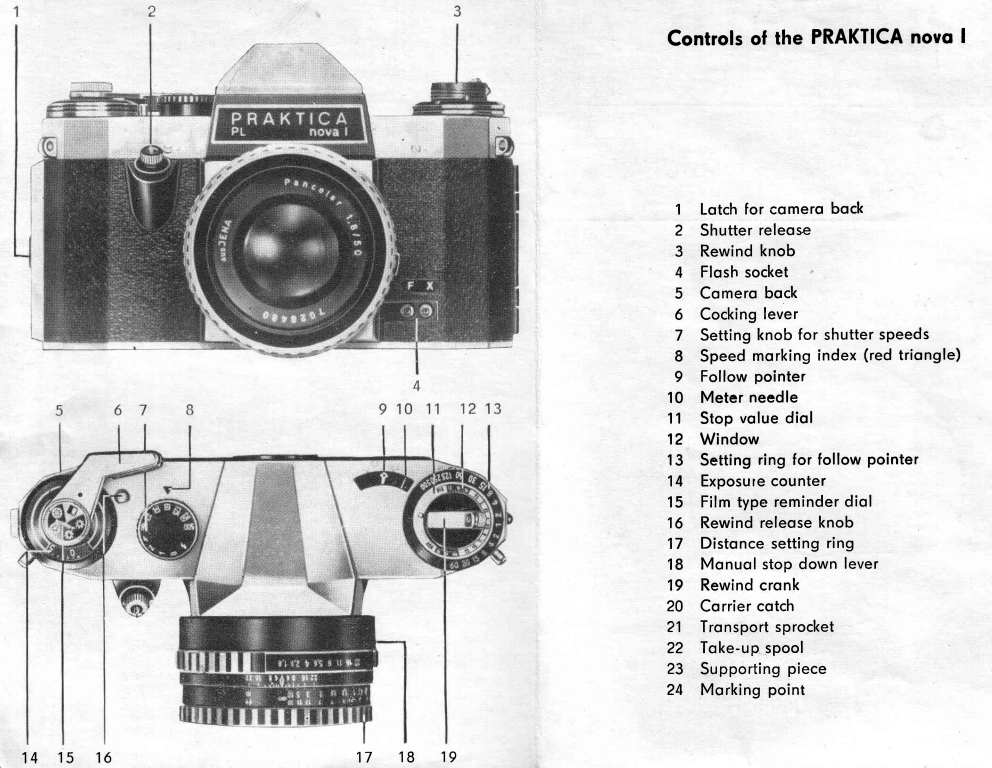 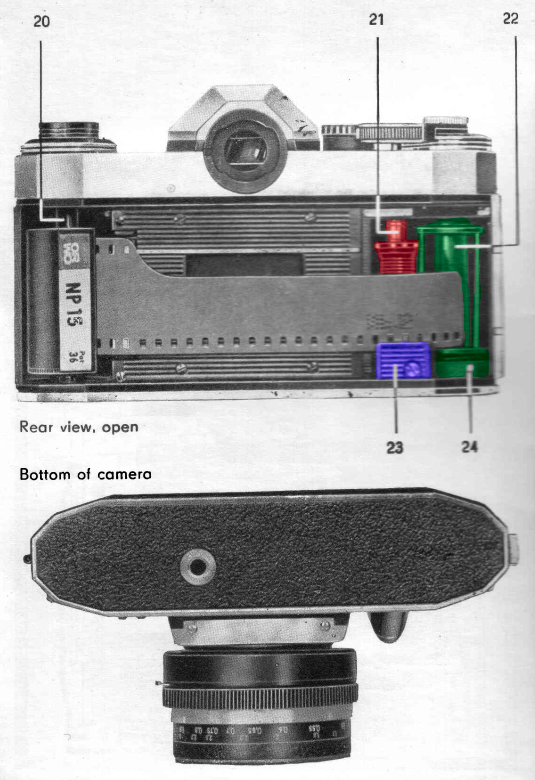 When I tried to unload the film I could not rewind it using the rewind knob (3). I also tried to manually help it in the dark room which was not successful. It feels like the film is wound around the transport sprocket (21). I cannot move it in any direction.

Looking at the manual I wonder if unscrewing the supporting piece (23) allows me to take out the transport sprocket (21) with the film?!

I want to try to save the film from being destroyed. The last resort is to open the camera in daylight and cut the film off the transport sprocket (21).

I suspect the transport spool is being held in place by a combination of friction and a stuck rewind release.

Getting the film out

After studying xiota's very helpful description I managed to get the film out in the dark with a combination of pulling the cocking lever, pressing the rewind release knob and manually pulling the film from the transport sprocket using a bit of force.
I have no idea how well the film survived this torture. I will try to develop it. The camera did not get damaged as far as I can judge.
Here is two close-ups for anyone with a similar problem. I still suspect that unscrewing the supporting piece might allow to take out the transport sprocket - however I did not try this. 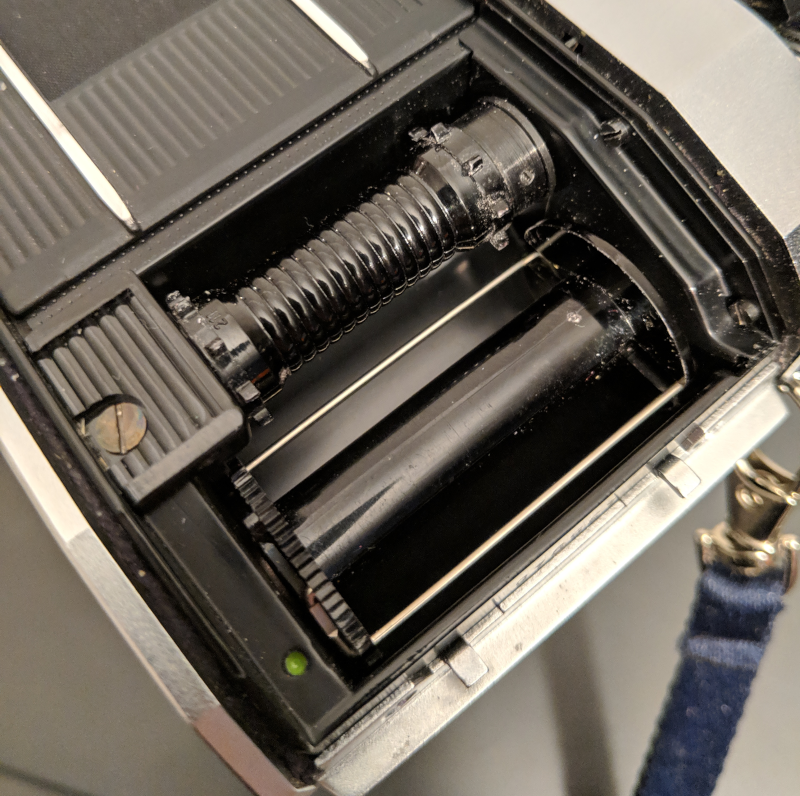 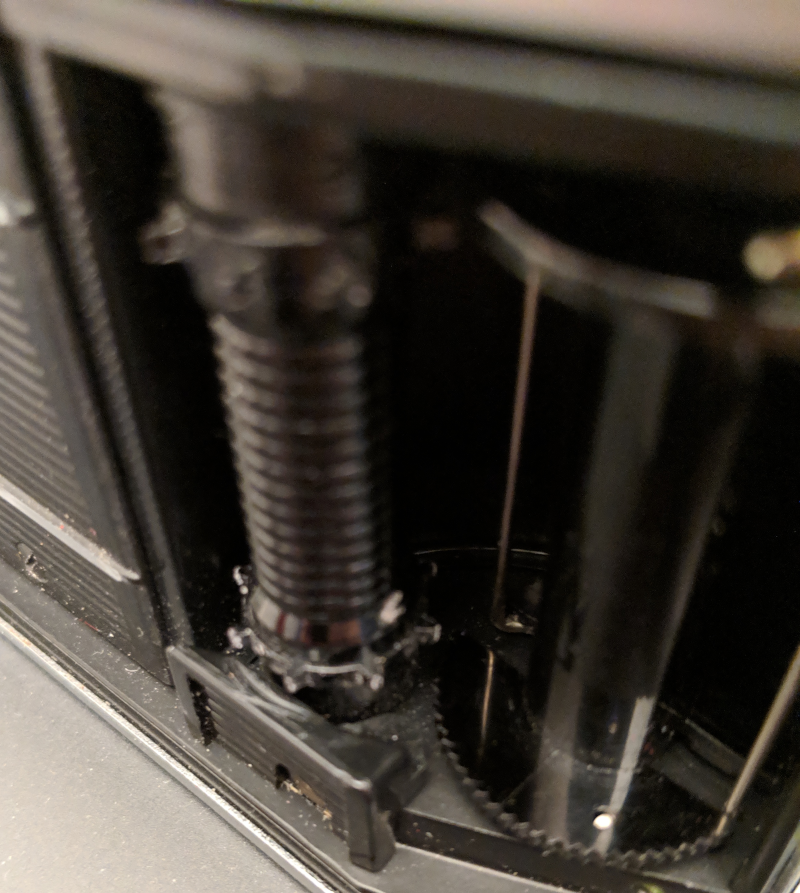 I developed the film. It turns out only 8 pictures made it through to the transport sprocket. Some of them are exposed multiple times. The rest of the film is just empty. Also there is a crack next to the 6th picture which was certainly caused by me trying to forward the film.

You have three remedies’.

Not the answer you're looking for? Browse other questions tagged film praktica or ask your own question.

7
How can I repair a faded picture developed from old film left in a camera?
4
How can I find the film speed and type of unmarked, exposed120 film?
1
How do you remove a film back from a Mamiya 645 Super with no darkslide?
6
What methods can be used to remove remjet from the back of motion picture film?
1
Developed film stuck to storage sleeves
0
Minolta SR-101 Shutter stuck (?) but film advance lever works
5
Can't advance the film because lever is stuck
1
rolleiflex tlr film rewind lever stuck
2
Film advance lever stuck on Canon ae-1 Program