I recently used my Sigma 150-500 lens to shoot my son surfing. I was using a circular polarizer. The shots all appear out of focus even though focus was good and depth of field was good, even though the filter was clean. As a guess, I removed the filter and the problem went away. I did not have the same problem with my other lens and its polarizing filter, so I'm thinking I have a cheap filter and need a better one. I was using AGFAphoto CPL 86mm. Do you agree, and if so, what is a recommended circular polarizer please? Thank you

I don't think that AGFA found some super cool way to manufacture quality CPL's for less than 1/10 of the guys at the top. Fact is, with filters, manufacturer quality does generally go up with price. There are some good ones lower down and some junk ones up above, as with everything, but the general trend is: you get what you pay for.

I highly suggest you look for reviews on landscape photography sites. Look for reviews that mention build quality, color cast, ghosting, contrast loss, and other items that additional glass in front of your lens can cause.

Also, check out this question: How do I choose a polarizer?

And this one: How do you handle the varying sizes of filters in your kit?

Your best bet is to spend the money and get quality filters, at the largest size that you need, and use step-up rings for smaller lenses. Now, whether that's a few circular filters or a square kit (Cokin, Lee, Formatt-Hitech, etc)...that's a whole other question.

The shots all appear out of focus even though focus was good and depth of field was good, even though the filter was clean. As a guess, I removed the filter and the problem went away.

That probably indicates that you were using a linear polarizer like we used back before the invention of autofocus. AF doesn't work with linear polarizers. When AF came out, polarizer filters were modified with a quarter-wave plate placed behind the actual polarizing material to reorient the polarized light waves in a non-intuitive circular pattern. Thus, we started calling them circular polarizers. This allows AF to continue functioning when using a CPL.

Roger Cicala at lensrentals.com did a survey of circular polarizer filters a while back and wrote a blog article about it: My Not Nearly Complete, But Rather Entertaining, Circular Polarizer Filter Article

He compared six different CPLs in 77mm diameter ranging in price from $102 to $200 purchased from a reputable major online seller (listed in alphabetical order).

He found that all of them were at least 99.9% efficient at polarizing light. He couldn't say any were more efficient than that because 99.9% was the limit of his measuring setup.

He found that all of them were flat enough to not affect IQ more than any of the others. In his words, "They all passed with flying colors."

Where they differed was in how much light they let through when not polarizing light. In other words, he shone already polarized light through them with the filter turned to let as much of it as the filter could allow through. Here are the results from least to most transmissive:

Roger did point out that some shooters might actually want the ND effect of less transmission when using a polarizer, which is often used in bright sunlight. So it is not always necessarily true that more transmissive translates to better in terms of CPLs.

In terms of spectral response, the two high transmission CPLs (B&W and Marumi) had near identical graphs between 430-700nm, with a flat line from around 500-700nm and a drop off on the blue end of things with significant limiting of UV wavelengths.

The rest had curves similar to each other but different from the two high transmission filters. There was no UV cut or drop off in the blue sections, there was a slight rise through the green wavelengths, then a very modest dip from green to red before a slight rise to infrared.

He then went on to say:

The second point, one which I’ve been told before I did all this testing, is set the white balance after you put the CP filter on, not before. Because CP filters will have a color cast. Or just shoot in raw and fix it later, which is what we mostly do anyway.

The final major conclusion he drew was what he termed "the painful one":

I didn’t want to test filters; I really didn’t. But people wanted me to. So I chewed up my testing equipment budget to buy laser transmission stuff and an optical spectrometer, spent a few weeks getting everything calibrated and establishing norms, and then a couple of days testing these CP filters. I did this in clear violation of Roger’s Third Law: No Good Deed Goes Unpunished. 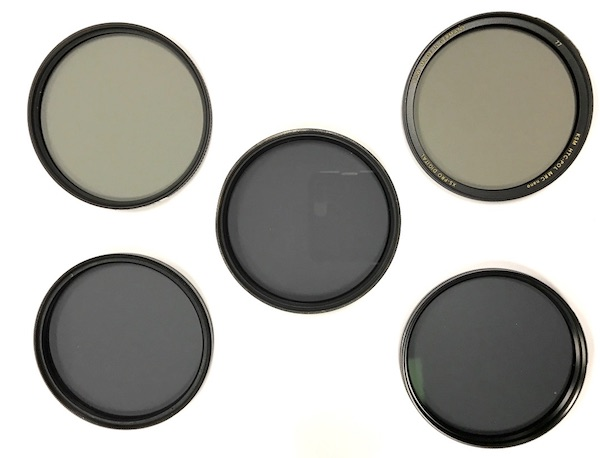 Later on Roger followed up with another post in which he tested a couple of cheaper CPLS:

And he measured the following:

He observed that the lower transmision seemed to be related to the lack of anti-reflective coatings on the cheaper filters. They were also as flat as his test could measure, just like the first six filters.

... There’s not much question that as far as polarizing light, cheap CP filters do it very well. They also, as you would expect from uncoated or partially coated filters, reflect a LOT more light. This is a significant issue on a clear or UV protection filter. I’m honestly not confident if it’s as big of a deal for a polarizing filter.

Not the answer you're looking for? Browse other questions tagged lens filters zoom or ask your own question.

26
How do I choose a polarizer?
27
How do you handle the varying sizes of filters in your kit?
3
Polarizers: Linear vs Circular. How does it affect a photo?

26
How do I choose a polarizer?
5
What is a source for small pieces of thin, high-quality, polarizing film for use with rear-filter lenses?
9
Why does a linear polarizer work as well as a circular one on a P&S camera?
17
Screw-in or square filters in the field?
3
Polarizing filter causing soft, hazy shots?
4
Can I use a polarizing filter as a neutral density filter to create motion blur on airplane photos?
2
95mm circular polarizer: B+W, Sigma, or other?
6
Is the Cokin 173 filter just a backwards CPL?
9
Sigma 150-600mm vs 300mm prime with extender?
3
Polarizing filter - degree of polarization vs polarizing sunglasses?