How to get focused pictures for action shots?

My daughter just started playing Tee-Ball and I was out there with my Digital Rebel XT and a Sigma 300mm. I know enough to be dangerous and I was shooting in "Auto mode" with the action preset (the little running guy). When she was up at bat and running bases I would basically hold the shutter button down to continuously snap pictures. Some of these came out pretty darn nice and others not so much.

I have one pictures of her, where there is a kid in front taking up almost the whole picture and he is blurry, while the top of her head (all you can see behind the kid in front) was crystal clear. In other pictures, she is the only thing in the frame other than clay and the camera seemed to focus on the clay even though she was dead center.

Am I doing something wrong? If not, how can I improve my odds of getting a good shot with the intended subject in focus?

Back when we only had film, people thought that having a motor drive would help them "get the shot" by holding down the shutter release and blasting through a roll of film.

John Shaw, the nature and landscape photographer, and author of a lot of great books on photography, said that motor drives were not fast enough to get the perfect shot. They were useful for making sure the camera was ready for the next shot though.

Move forward to now, when we have digitals that can shoot a lot faster. Mine can do 8 frames a second. I mostly shoot fast action and only use single shot mode, but one day was thinking about Shaw's comments and decided to do an experiment. In daylight, at 1/5000 shutter speed, while shooting some very fast action, I switched to continuous mode and mashed on it for over a second.

Later, looking at the images there was significant gaps in the action between the frames. Out of a second's worth of movement, the camera only caught 8/5000 of what went on, which left about 4992/5000 of a second unaccounted for. In other words, most of the second was missed and the odds of me getting the best action were very small as a result. I had repeatedly gotten better results by watching the action and timing my shots.

And, that's something I've heard repeatedly from pro photographers shooting baseball, and all sorts of other sports. The big name pro baseball shooters have a holy grail of getting a bat-on-ball shot and like to show the results of using the continuous mode vs. timing it, and that they have better results also, by timing it.

So, while it's cool to have a high frame rate, what is more important is that the camera can respond faster and be ready to shoot again faster, but it's your ability to pick the right moment to release the shutter that will get the best results.

Now, regarding focus while following fast action: You have to think about what the camera needs in order to focus. It needs good light, obviously, but also needs good contrast on the subject, either in patterns or changes of color.

The camera tries to locate the edges of things, and then reduce the blur of the edge by focusing until it's got the least amount of blur. When it's dealing with a monochromatic subject or very low contrast the focus can, and often will, switch to a slow seek to try to find the focus, or worse, give up after seeking several times.

Nikon and Canon try to do predictive autofocus by figuring how fast the subject is moving toward or away from the camera as it's tracking, then adjust the lens' focus when you release the shutter to pre-compensate for the subject's motion toward or away from you so the image will be sharp. That's all fine, but often the lens can't focus fast enough so it is still behind or in front of the subject. A faster focusing lens can help, which is why both Canon and Nikon have their high end pro-lenses. My Canon 70-200L F2.8 AFS lens will run circles around my wife's 70-300 F4.5-5.6 lens when tracking action, but then again, my needs are different than hers.

So, having decent light and a faster focusing lens can help, but so can you, by tracking the area on the subject that will give the camera the best chance. Using the center sensor helps a lot, but where you put that sensor can make a difference, so find whatever part of the subject moves the least and keep the sensor there as you track movement. The waist and hip area moves less than arms and legs or the head so I go for mid-chest to waist or the hips. And, as the action unfolds hopefully you can keep one of those areas in view.

Even though today's cameras are much more sophisticated than ones from a few years ago, they're still not able to deliver consistent results in tough circumstances. That's when the photographer has to take over and tell it what to do, and when. You need to be able to recognize those times the camera is going to get it wrong in advance, and take over in time, or you'll miss the shots you want when the light isn't good enough or things are moving too fast.

There's two concepts that are important to learn as they're very applicable to your situation:

With some combination of focus techniques and proper depth-of-field, you'll be able to get the right clarity in your photos.

As a dad learning to shoot Little League myself a few years ago, I know there's a lot to learn. A few things you can try that helped me:

Give these a try and you should see better results.

I recommend beginning with the photos you have already taken. Open them in an application where you can see the EXIF data and spend some time examining the Aperture, Shutter Speed, and ISO of the ones that are in focus and sharp. Now compare those against the blurry ones. What do you see that is different?

When I shoot youth sports I put the camera in Aperture priority mode usually around f/5.6, this is the maximum aperture for the 100-400 lens I use, and then begin adjusting the ISO. On a bright day of baseball the ISO may be 100, on a cloudy day it may be 800, and at night I may push it to 1600. My camera goes up to ISO 12,800 but I am unhappy with the noise level at anything above 1600.

I let the camera choose the shutter speed even though it is the MOST IMPORTANT part of the exposure equation in shooting action sports. The shutter speed is what you use to stop motion. Search around and you will find many discussions on what shutter speeds to use, for youth sports I try for the 1/500 to 1/1000 range depending on what I am shooting. If I am shooting a pitcher or batter and want to see the threads on the ball I will go to 1/1000 and faster, but for general shooting I would rather lower the ISO a stop and have a shutter speed around 1/500 which is fast enough to freeze most of the kids running bases and running for balls. 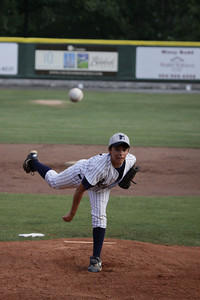 I do not shoot sports in manual mode because the quality and amount of light is always changing, clouds pass overhead, trees shade the outfield, I shoot into the dugout, you get the idea.

Also set your focus to the center sensor only and use AI Servo after reading up on it a bit. The center sensor is usually the most sensitive sensor in the camera and it helps speed up focusing and will give you confidence to know exactly where the camera is trying to focus.

For the beginner, one point that may be missed in the answers already given is that you should increase the aperture setting a little (perhaps around 10), especially on a fast lens. If you're getting motion blur, in addition to using a vibration reduction or image stabilization lens/camera (and learning to pan if you're trying to catch action shots), you can turn the ISO up a bit to compensate (try around 400-600 if you find you'll need it).

Test these changes on something like grass in the backyard, where you can easily see the increase in DOF from the aperture, and detect any added grainy texture from the increased ISO setting. This way you can double check the results on a large computer screen rather than guessing when you're on the field.

9
Which is better - autofocus and recompose vs. manual focus?

41
How do I combine multiple exposures for action shots?
2
How can I get non-blurry gymnastics pictures with my entry-level DSLR?
5
Taking sports and action shots with regular lenses
3
Why my "action" shots are blurry even shooting on AF-C, is this a lens or camera limitation?
4
How to correctly focus on the background person in a shot?
0
Why are my football action shots blurry?
2
Metering for Fast Action Under Changing Lighting
3
Recommended shutter speed for action sports?
4
Why am I getting blurry images with a Sigma 35mm Art and Canon EOS 77D?
3
How to get more pin sharp shots with a lens known for inaccurate autofocus?