What type of lens filter goes between the lens and body and has metal flakes in it?

About 20 years ago when I was just starting out in photography, I was at a portrait photographer's studio. He was showing me some of his equipment. One thing that I found interesting was a set of square filters he used. They were made of solid glass, about 1/8" to 1/4" thick and appeared to have metal flakes at different depths in the glass. What was odd was that the filters were inserted between the lens and the camera body rather than being mounted to the front of the lens. If I recall correctly, they gave a glowy, softening effect that I've heard videographers refer to as the "Barbara Walters" effect.

What are these filters called? I've never seen anything similar since then, though I don't do much portrait photography.

Although not as common as they used to be, there are lenses made with gelatin filter holders on the back of the lens. Probably two of the most common ones still in current catalogs are Canon's EF 17-40mm f/4 L and EF 14mm f/2.8 L. 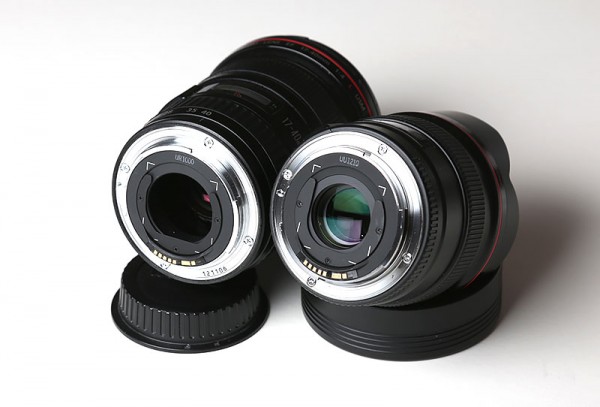 Most lenses with such filters are wider angle lenses that make it problematic to place a filter in front of the lens, due to either bulbous front elements or issues with vignetting due to the lens' wide angles of view.

Going back even further, square glass filters behind the lens were much more common with large format view cameras than they are with smaller format cameras such as FF and smaller digital cameras. They were common enough that everyone familiar with large format cameras seems to know that inserting a glass filter behind the lens will alter the focus distance to the film by 1/3 the thickness of the filter. Thus the camera should always be focused after the filter is in place.

Related:
Why would I use a rear gelatin filter over a front filter?
How do rear gelatine filters compare optically with "regular" front-mounted filters? Where to buy them? How to cut them?

As far as I'm aware, most square/rectangular filters go in front of the lens in a holder. Some lenses are designed to take filters behind the rear element, but the ones I've seen are round. Thick glass would also be expected to affect focus. So the lens and filter would have to have been designed specifically to work together.

Here are some other possibilities, though none fit your description exactly:

Not the answer you're looking for? Browse other questions tagged portrait filters or ask your own question.

6
How do rear gelatine filters compare optically with “regular” front-mounted filters? Where to buy them? How to cut them?
1
Why would I use a rear gelatin filter over a front filter?
0
How to use a filter on a lens with a bulbous front element? (Rokinon AF 14/2.8)