Are these colored pixels in raw image (viewed in dcraw software) dead, hot or stuck?

Definitely not a photo pro here - I've tried taking RAW photos via CHDK on Canon S3 IS as .DNG.

I work on Ubuntu 18.04, and when I open these .DNG in photivo, rawtherapee, and I think also darktable, I cannot notice much out of the ordinary.

However, if I try to use dcraw (to produce a .tif), or something that uses dcraw directly like nufraw (whether standalone or as GIMP plugin), I get these colored pixels: 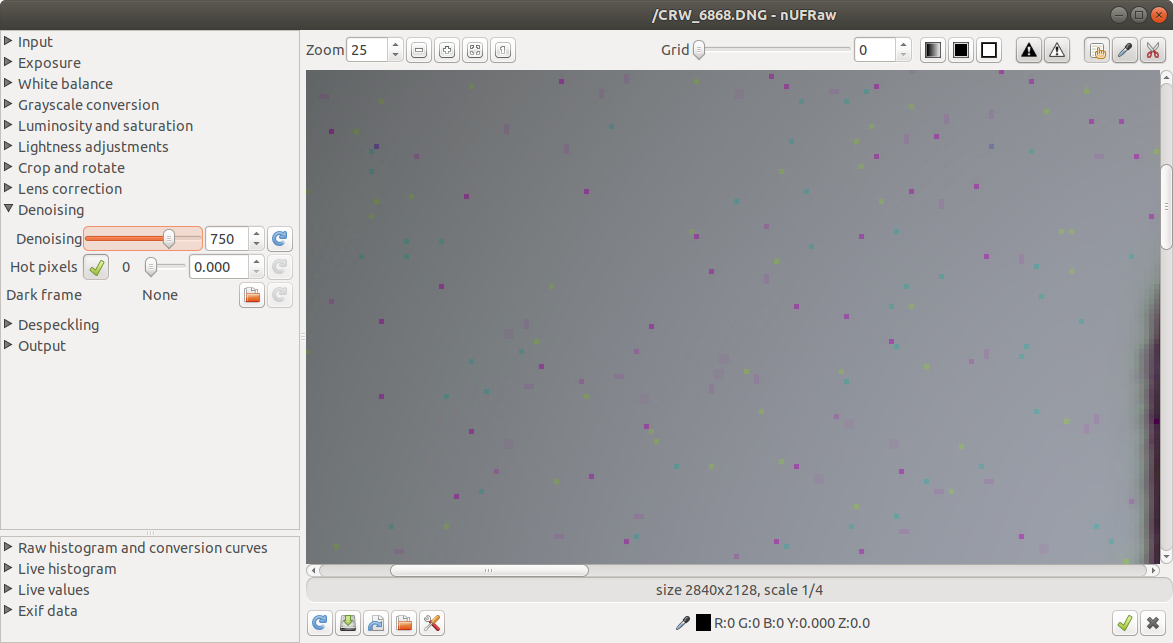 (notice they don't go away with Denoising at 750, and "Hot pixels" checked in nufraw - not even if I move the "Hot pixel sensitivity" slider all the way to the right, to value of 10.000)

So, I wanted to ask:

EDIT: as per comments, here is a comparison between two photos with the same camera opened in nufraw, with view anchor at top left of image, and zoom 200:

Looks like the pixels are in the same location, but they don't look the same - for example, for the colored pixel indicated by the red arrow, on the left it is blueish and smudges horizontally, on the right it is reddish and smudges vertically.

EDIT02: Getting closer - it turns out, if I click on "Underexposure warning" in nufraw, these pixels start blinking:

Now, why would I even have like one underexposed pixels surrounded by many which are not underexposed, I don't quite understand (maybe it's still related to "hot"/"stuck" pixels?) - however, even if those colored pixels are mere warnings, they still import into Gimp (after you've made the workaround in Bug #1791138 “Cannot edit RAW files in GIMP under Lubuntu 18.04” : Bugs : ufraw package : Ubuntu)

So they're likely some sort of a warning - except I cannot tell how to get rid of them once I've imported them in, say, Gimp (or converted to tiff as in dcraw -T mypic.DNG)...

13
Are hot pixels just one pixel?
8
Olympus OM-D developing hot/dead pixels within two weeks of purchase
0
Non-Canon software not reading custom image settings off RAW images
5
How common are hot pixels on new cameras?
2
Are these strange splotches on buildings in a long-exposure photo hot pixels?
5
Are there stuck/dead pixels in my photo?
4
“Stuck” pixel appearing on every photo taken
7
What's the best way to deal with hot/stuck pixels in long exposure night photographs?
1
What are these purple pixels on my Canon 60D and how do I get rid of them?
8
Hot, stuck, or dead pixels. What's the difference?