Are there add-on lens accessories which collect additional light, as a parabolic microphone can be used to gather more sound?

I recently imagined a useful accessory.

Suppose you need an fast shutter and low ISO photo, but your APS-C camera doesn't help much, nor does your telephoto lens with very small aperture, in the middle of the night.

My idea for a solution is attaching a triangle-shaped lens thingy to the tip of your telephoto lens, just like a filter or an lens cap — but it collects light.

Did I just invent the light collector or does it already exist?

As you edited your question it gives me more room. The same as a parabolic mic, any mirror lens do the exact same thing. It takes parallel rays coming from a distance, and focus them on a smaller spot... the focus point.

Ever heard about the Hubble telescope? A mirror lens collects light.

The James Web telescope I am mentioning this specific telescope because it uses an array of mirrors... to collect more light, but the overall shape is a section of a parabolic mirror. The array is not meant as an additional attachment, but it is planned as such from the start because this light must be focused at the exact same spot.

But an optical lens also collects light. The bigger the better, that is why a big aperture collects more light than a smaller one.

I understand your analogy to a parabolic mic. But there are some differences. 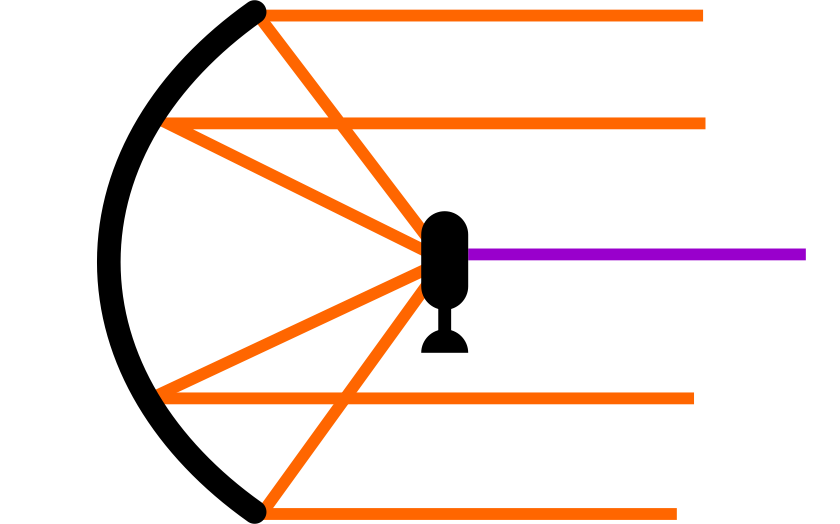 The pure sensor is the equivalent of the mic membrane. But a difference is that it needs a focused beam to actually work.

This attachment will not work just because... 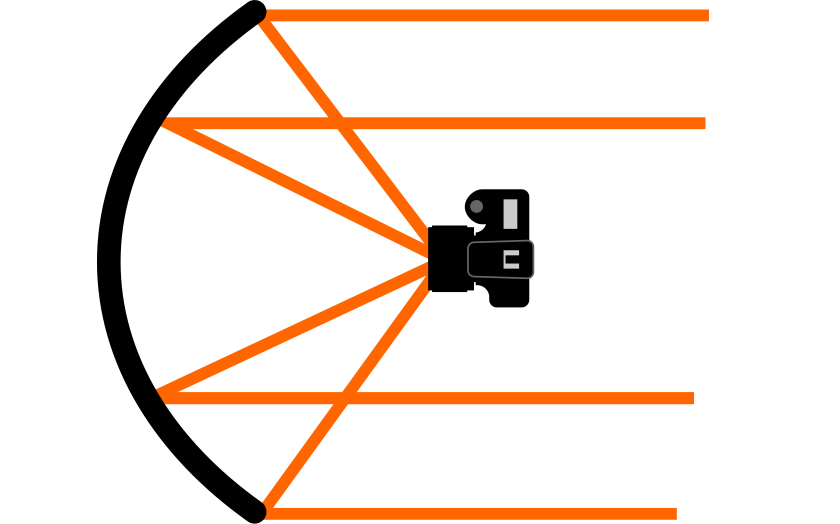 We actually construct parabolic lenses equivalent on a parabolic "mic" (again, the parabole is a different attachment than the actual mic) 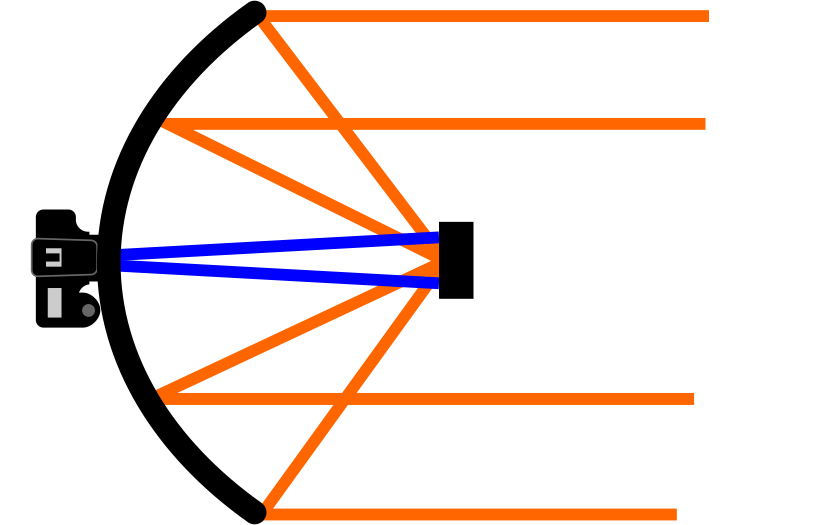 On a smaller scale, any mirror lens, normally telephoto ones, are the exact same principle... collecting light... the bigger the better, but the bigger the bulkier, so you limit the size to a managable one...

But also the normal lenses. But they do this by refracting light instead of reflecting it. The bigger the lens the more light it can collect.

The purpose of ANY lens is to collect more light... more light than what? you may ask...

The simpler camera without any lens is a pinhole camera... but the area that receives light must be really tiny to produce any decent image.

So here is a side by side comparison of a device made to collect more light... The first one is out of scale... 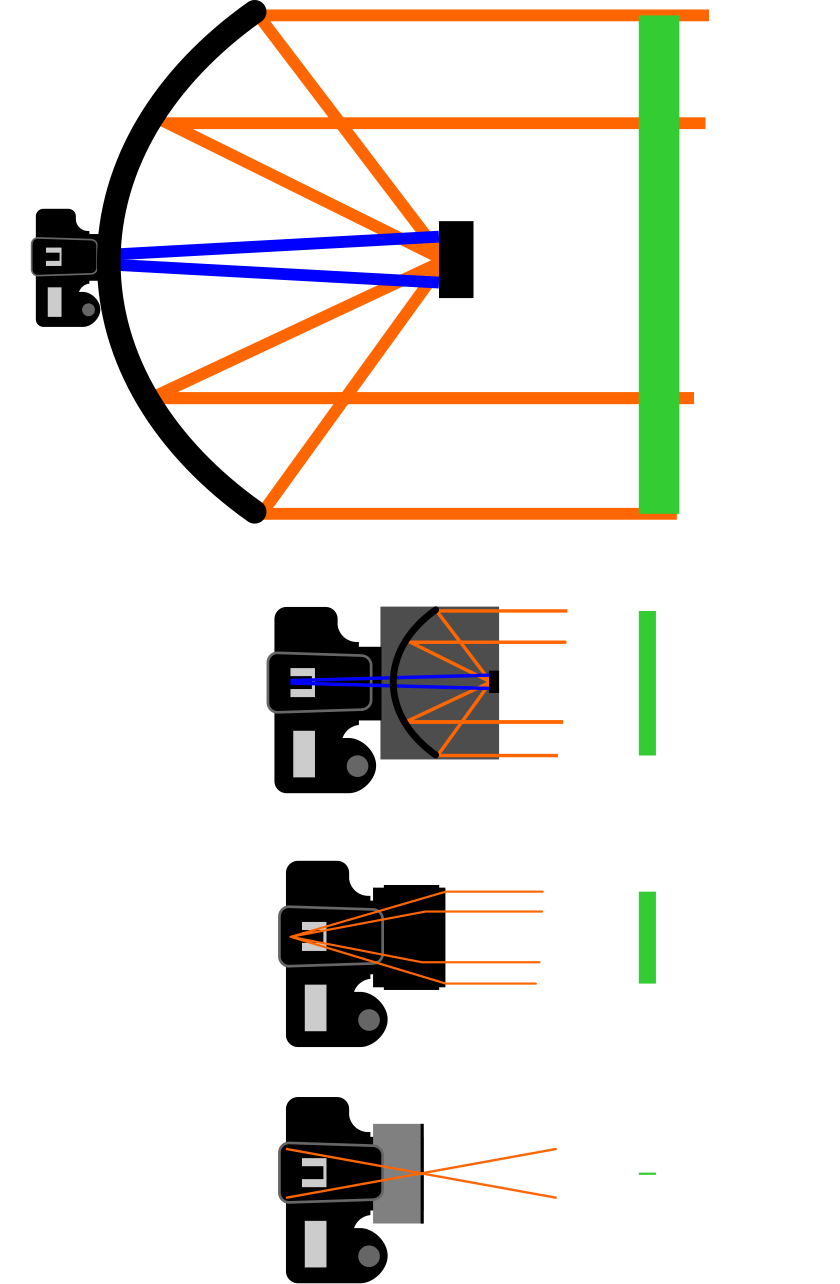 Any lens is a device made to collect more light... than a smaller one.

I also mentioned the shutter speed.

On a static object, with a fixed positioned camera (tripod) you can collect more light giving the photo more time... But that does not work with sound waves, because the sound is totally dependant on time. The sound is a vibration and its frequency is vibrations per second. The resulting file or recording must be reproduced across time (duration of the recording)

But photography compresses time... you can collect photons across 22 days, to produce a single photo.

There's already something that has been invented to collect light for photographs. We call them lenses. In order to collect more light, the front element of the lens must be larger for the same focal length, or have a wider angle of view for the same entrance pupil diameter.

There's no substitute for getting a good lens. Any light gathering tricks that can be implemented without ruining image quality are already built into good lenses.

A "light-gathering" device that attaches to the front of a lens is a wide-angle conversion lens. As in the name, they change the field of view. They also usually significantly degrade image quality. They're basically toys that aren't even worth the cost to ship. You can check your favorite auction site. They're pretty much being given away if you're willing to pay the cost of shipping.

A device that attaches between the lens and camera would be a focal reducer. They can be useful for using full-frame lenses on crop sensors. Good ones are expensive, but have the potential to improve some aspects of image quality.

Another light-collecting device is commonly known as a reflector.

You did not invent a "light collector". Your camera cannot interpret anything that isn't visible, so basically your idea boils down to "some contraption that produces a bright virtual image that the camera gets to see instead of the less bright original image". Increasing brightness is only doable by altering the angle of input. So basically you "invented" a telescope with good light yield.

Some reasonably high quality old screw-on tele converters can thus make some limited sense for converting a not-so-fast tele lens into more of a portrait lens (regarding DoF) as long as the associated loss of quality is not problematic for the intended end product.

Note that for interchangeable lenses, there are tele converters that are screw-in-between. Those tend to have better image quality but always lead to a loss-of-light so they are not useful for this purpose.

This cannot work since any point outside of the front lens (and actually, outside of the entrance pupil) has a different perspective from any light inside. So a light ray arriving in a certain direction at a certain point has to be sorted with other light rays arriving from the same source. The normal lens does this by assuming a focusing distance: all rays arriving from that distance on the front lense and admitted through the entrance pupil are collected into a single point on the sensor.

Your light gathering device does not have the information about the focusing plane so it would not know which light rays it would have to group the additional light rays it collects with. So it could only work if you provided it a focusing plane to work with: it could not be an afocal system. By the time you do that, it is a complete separate camera with its own aperture and focus information or, since it provides a bright virtual (rather than real) image for the actual camera to look at, a complete separate telescope. Why combine two lenses in that manner, with two separate apertures and two focusing mechanism when a single lens designed with the same overall specifications would likely work better since it would not have to do all the same corrections and operations twice?

If a device as you suggest was at all possible (without reducing effective focal length), it would be an afocal system using the lens behind it as a tube lens (like in an infinity-corrected microscope. Not sure if that approach could work - does it violate conservation of etendue?). Thoroughly impractical, and not cheaper to build than a lens of the desired aperture in the first place - you would need a glass front element just as big, or alternatively a cat(adi)optric system just as hard to make as a complete cat(adi)optric lens for that focal length and aperture.

Wide angle converters and speedboosters do exist, but these change the effective focal length down, increasing effective aperture size.

The only option left would be attaching some kind of image intensifier tube (a device that actually outputs more light than what goes in - consuming electrical power instead)....

No — what you are imagining is impossible. (Sadly, saying "It'd be awesome if there were boots which lifted you into the air" isn't the same as inventing anti-gravity boots).

You can use a parabolic mirror if all you care about is gathering and concentrating greater amounts of light (like for solar hot water). But that's not what we want for a photograph — we actually care about which light.

There is a strict relationship between the amount of light per unit area of your recording surface (sensor or film) and the ratio of the lens' focal length to its (effective) aperture — that is, its f-stop. The only way to get in more light is to reduce the focal length (so you're gathering light from a wider area) or to widen the aperture (so you're letting more light in at once). There's no way to attach something that will "collect light" and result in an image that brighter but otherwise the same.

Not the answer you're looking for? Browse other questions tagged lens low-light night accessories night-photography or ask your own question.

11
What options do I have for a normal and fast prime lens for a Canon APS-C camera?
1
Can lens accessories be used interchangeably?
1
Are there any resources or websites for finding areas which have low levels of light pollution at night?
3
Is there anything in medium format systems which can beat pro-level 35mm digital with fast lenses in low light?
5
Are there adapters so I can use my lens converters on a Canon entry-level dSLR?
2
Are there lenses which can give 180° fisheye circle with a cropped-frame camera?
1
Which wide angle lens and camera combinations are considered to be particularly resistant to artifacts from street light sources?