What is produced by twisting the bellows?

While researching Sinar Norma cameras, I found this picture: 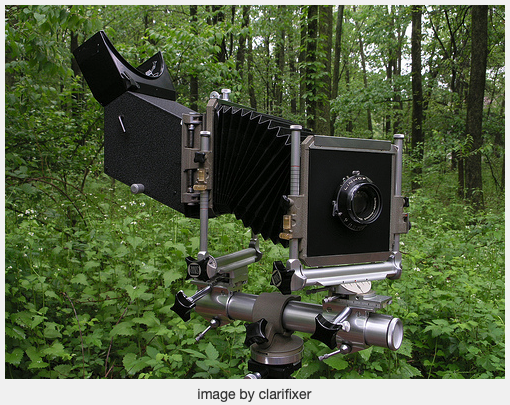 It seems that the photographer who was using the large format camera was twisting the bellows of the camera using the flexibility of the rail mount.

What is this technique called and where can I see some examples of the results?

The general/umbrella term is using camera movements. A tilt/shift (or perspective control) lens for an SLR is a very limited way of bringing such movements to a type of camera that doesn't natively have them. Rail-type view cameras usually have a full suite of movements available; field cameras (flatbed view cameras that usually fold up into a sort of carry case) usually have restricted rear movements.

In this case, the movements obviously being used are rear rise, front fall and front swing. There may be a small amount of tilt on the front or rear standard, or both, but it would be a very small amount since it's not obvious in the picture. There is no discernible rear swing, but there could be a small amount for fine-tuning. There is a lot of fine tuning to do in large format photography.

The position of the lens in space determines your viewpoint - it's where your "eye" is in space. Front rise/fall and shift will control that. In this case, it's likely that the photographer used quite a bit of front fall because the desired view was looking down-ish, and it can be easier to make some adjustments (tilt and swing) when the camera rail stays level. Simple angles are easier than compound angles.

The position of the film/sensor determines your framing from that point of view; that's handled by rear rise/fall and shift. Think of it as cropping without having to crop anything - you get a full frame provided that the image circle of the lens can cover the full frame. In this case, the photographer wanted the film plane more or less vertical for reasons discussed below, but wanted the viewer to be looking downwards. The rear of the camera has been raised above neutral. The combination of rear rise and front fall gives a pretty steep angle, but still leaves quite a bit of room on the standards for further adjustment if necessary.

As for the tilts and swings, the rear settings are used mostly to control the perspective in the image - how the lines converge and so on. To a first approximation, if you want a brick wall to look square to you, the film plane of the camera needs to be parallel to the wall. In this case, there is probably something in the background that should look vertical, like a tree of hill, and would appear to be leaning severely if the whole camera was pointing down. Keeping the film plane vertical solves that problem. (That can also be done by pointing the rail down and tilting the back back, but there's your compound angles already. What if you need to swing as well?)

The front tilt and swing is mostly about placing the plane of sharpest focus where you want it to be - see the Wikipedia entry for the Scheimpflug principle. As with a tilt/shift lens on an SLR, you can also use front tilt/swing to remove sharp focus from part of your image, or to make miniature effects, etc., but that's pretty rare in the large format world - getting enough in focus is the usual problem.

All of those movements have legitimate uses, many of which aren't really much of a concern when your camera is small and lightweight and easy to point and your film/sensor is small and depth of field is relatively easy to achieve (whether with small aperture or with focus stacking). Even perspective corrections are often easier to do in post, with some detail loss. When you live in a world where a 90mm lens is wide-angle, the game changes just a little.

The photographer was just tilting/shifting the lens to change the way the imaging circle would be recorded. The bellows are not being "twisted". If you look at the camera frame and the lens holder, they are both perpendicular to the ground.

See How does a tilt-shift lens work, and why does it solve certain problems?

Suppose the principal subject of an advertisement shot is a cereal box. You position the camera so that the shot contains the front, top and one side of the box. To achieve, the cameras viewpoint must be off-center. To your dismay, the rectangular box front is rendered not square, it’s a parallelogram. Your competition is an artist who renders this image using his free- hand art. His drawing of the box is perfectly square. Swings and tilts to the rescue. You set you view camera so that it sees the front, top, and sides of the box. You deploy the swings and tilts, and square-up the box front. Voila! Your photograph outshines the hand-drawn rendering. The box is rendered without convergence.

We use swings/tilts because the camera renders 3 dimensional objects in 2D. The resulting perspective sometimes renders the subject weird. Using the swings and tilts plus sliding front. Allows elimination or at the least, mitigation of horizontal / vertical convergence. Swings / tilts also under certain conditions can increase depth-of-field.

Not the answer you're looking for? Browse other questions tagged large-format bellows or ask your own question.

14
How does a tilt-shift lens work, and why does it solve certain problems?

7
Should I consider a used Tachihara 4x5" Large-Format camera or an equivalent new alternative?
6
Is a “Zone” Large Format Camera with gold plating legit?
3
Shift bellows for (canon) DSLR
4
Who is the (contemporary) photographer using an old bellows camera?
4
Help identifying a camera during the London Olympics games 2012
6
Use of DOF adapters in stills photography
4
Is there a reason to use folding bellows instead of my bag bellows for a range of lenses?
1
How to fit an action camera into antique (bellows) housing?
2
Focussing 100mm Auto Bellows Minolta lens on Bellows I with slide duplicator
1
Mounting large format lens on PB-4 Bellows