LIDAR burnout; ways to check for damaging infrared lasers before shooting besides looking for posted warnings?

The BBC News article Driverless car laser ruined camera describes a situation where a particularly powerful infrared laser from the LIDAR of a prototype car at the CES show damaged the sensor of a photogrpher's camera.

Question: Besides looking for a sign that says "Caution, no photography, infrared lasers in use" are there any ways to check for the presence of infrared lasers before shooting?

For cameras with through-the-lens displays, one can view the scene as the sensor sees it, and detect damage after the fact if it is bad enough.

However, are there any ways to detect the presence of un-announced infrared laser beams that could damage a camera, or possibly any way to use the camera itself to do this in a less risky way?

At the end of the article (part quoted below) it mentions "fiber laser" and these are often at longer wavelengths (1300 to 1600 nm) than most semiconductor lasers (often 800 to 950 nm). The problem for the longer wavelengths is that the silicon itself may not produce any signal, so in those cases you wouldn't see the "purple dot" from the IR light, but only sensor damage after the fact. (I've asked separately What wavelengths are most commonly used in laser-scanners and LIDAR systems?)

When shooting in bright sunlight there is obviously general awareness and recommendation of caution.

Eye-level infrared laser beams however are something new and different, and these are invisible and so one doesn't necessarily know one is photographing a laser until the dot shows up in the photo.

If I understand correctly these LIDAR systems use wavelengths that are absorbed in the front of the eye and so never pass through the lens and get focused to a small spot on the retina. An IR-blocking filter on the lens can mitigate the problem, but an IR-blocking filter on the sensor, near the focus, can melt and fail for the obvious reason that it absorbs the power which is now focused to a small spot. 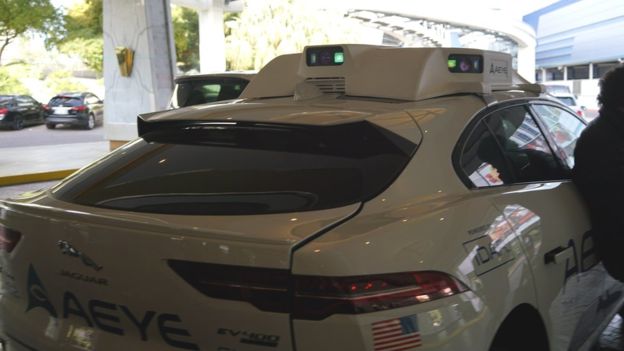 The lidar system on the top of the demonstration car 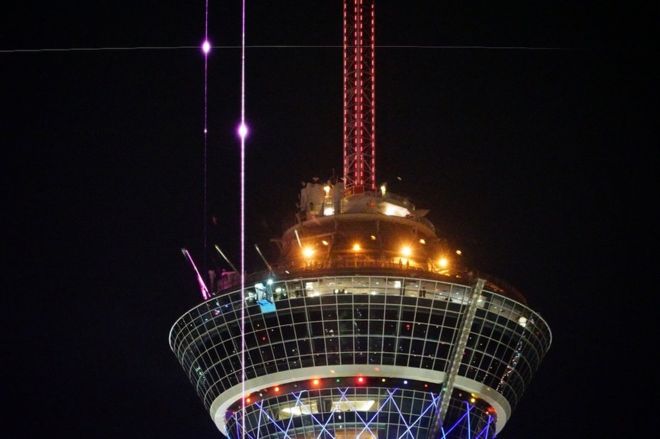 The purple dots and lines on this photo of the Stratosphere hotel in Las Vegas show the damage...

The article goes on to explain:

Lidar works in a similar way to radar and sonar, using lasers rather than radio or soundwaves, explained Zeina Nazer, a postgraduate researcher at the University of Southampton specialising in driverless car technology.

"Camera sensors are, in general, more susceptible to damage than the human eye from lasers. Consumers are usually warned never to point a camera directly at laser emitters during a laser show."

Ms Nazer added that for cameras to be immune to high power laser beams, they need an optical filter that cuts out infrared which is invisible to humans. However, it can affect night vision, when infrared can be an advantage.

"AEye is known for its lidar units with much longer range than their competitors, ranging 1km compared to 200m or 300m," she said.

"In my opinion, AEye should not use their powerful fibre laser during shows."

There are certainly ways to detect infrared lasers — if there weren't, they wouldn't be very useful for LIDAR or anything else. But I'm sure you're looking for a solution that's practical and relatively inexpensive: strapping on a pair of night vision goggles to detect camera hazards doesn't seem appealing.

There are materials that can convert infrared light to visible light, and they're often found on cards and other devices meant for detecting IR laser beams. For example, Edmund Optics carries a card that can detect fiber lasers like the one mentioned in the article. I don't know nearly enough about these things to recommend any product, but you can find lots more by searching for "IR laser detector card" or similar.

There are also lots of electronic components that can detect infrared light — IR detectors are used for all sorts of things from motion detectors to remote controlled appliances. Electronic IR detectors will generally have very small sensing areas, so a direct hit would be unlikely unless the laser you're looking for is scanning over a large area. Luckily, that's exactly what a LIDAR system does. Electronic detectors can be very cheap, depending on the wavelength range you're looking for, so you could potentially sew a whole array of them onto a jacket, camera bag, etc. You'd need some additional electronics to read the sensors and provide useful output, like lighting a warning light, but it seems like a do-able project.

The most practical way might be to buy up old, low spec digital point and shoots and camera phones - the kind you can get for a few dollars apiece from thrift stores etc - in bulk, and use them up as expendable IR detectors before getting any valuable equipment out. Anything that can directly display what the sensor sees should work. IR is likely to be very visible - even infrared remotes pointed directly at such cameras tend to be visible when activated.

Not the answer you're looking for? Browse other questions tagged sensor equipment-damage specification laser or ask your own question.

5
Are there industry standards or specs for image sensor resistance to damage from intense light?

43
Why don't cameras offer more than 3 colour channels? (Or do they?)
2
Does near infrared AF assist light work with sensor based autofocus?