Is this color-correction explanation of images from a lunar lander gobbledegook?

There are many asking why the Chang'e-4 images of the (far side of the) Moon's surface have an reddish-orange hue. In this answer I suggest that the camera may not use a traditional human-matched color filter set but instead have extended wavelength range to get more science, and so one should not expect realistic color to begin with.

But my question is about this authoritative-sounding explanation published in the Planeaty Society's newsletter as a guest blogpost: Chang'e 4: Why the Moon's far side looks red in new images

The first picture below is an example of one such “raw” image, and I’ve accompanied it with histograms of the red, green and blue channels to show how brightness is distributed in each. In the raw version, the lunar surface looks red because the detectors used were more sensitive to red than they were to blue or green. So although in truth the surface is almost equally bright in all three colours, the green and blue detectors have been set up so as to be less sensitive to light than the red detectors. This is why the green and blue histograms do not extend to the bright end of the range of their scale.

First, the "in truth" part is not defended, and the reflectivity of the Moon really does have an orange tint, see below.

Second, is the argument that the camera's settings are "off" just that the histograms show different levels? Isn't this just exactly what you would expect from an image dominated with something orange?

Question: Am I missing something, or is this explanation not at all an explanation, but instead just some internet gobbledegook? 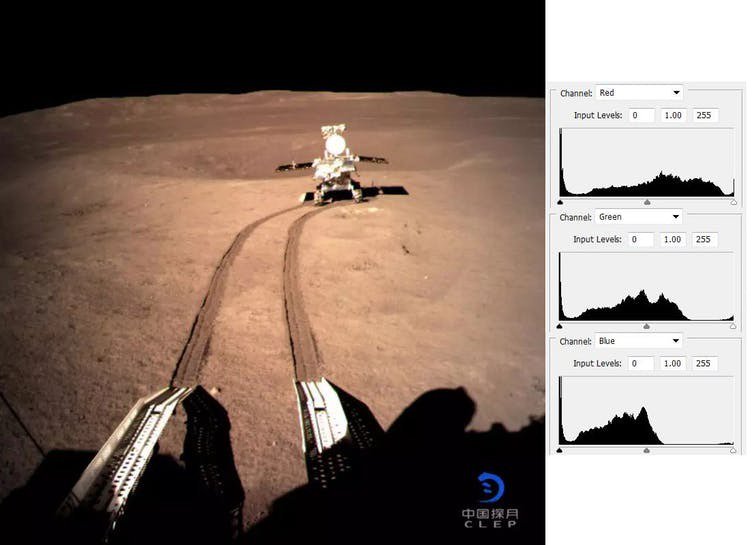 This is borrowed from this answer.

The statement was "This is why the green and blue histograms do not extend to the bright end of the range of their scale." not "This is why the green and blue histograms show lower averages." so the statement is not in conflict with a primarily reddish image. It's not a statement about averages but about the highlights. And indeed, in the image you include, the white highlights corresponding to the right of the respective histograms are comparable in all channels even though the main weight of the red histogram is far more right-leaning.

So taken literally, the statement depends on interpreting the highlights of the image, not the main hue. Whether it makes sense or not, of course, still depends on whether the highlights are "independently" white or part of the reddish landscape. Of course, one cannot really rule out blown highlights either without more information in which case any bets as to the actual hue are off.

In other words: bad data and missing information for interpreting it. We can guess all day long here.

Not the answer you're looking for? Browse other questions tagged color color-management astrophotography moon or ask your own question.

2
Reducing color balance errors across multiple cameras
3
CIE Chromatic Diagram explanation
11
What would happen if a camera used entirely different primary colors?
43
Why don't cameras offer more than 3 colour channels? (Or do they?)
3
Why is the color mask of this 135 film dark blue-green?
1
Why does the green gain affect the blue and red values on a CMOS sensor with individual gain control?
1
Why do pure colors (red/green/blue) become a mixture of colors when converting raw?
3
Is cyan brighter than red?
1
Why do typical imaging sensor colour filter spectral responses differ so much from the human eye spectral response?
1
Does colour mixing work with other sets of three colours?