Why should I use the Zone System when the histogram gives me all the information I need?

DSLR cameras, by and large, give very complete information about how the photo is exposed, in the form of a histogram and image of a trial exposure. It shows the light distribution for both luminance and the colours. It shows if there is any clipping of highlights and shadows. Looking at the test image itself allows me to quickly assess whether the key tones are correctly exposed. And if they are not they will be close enough that I can easily correct them in post processing.

This seems to me to give all the information I need to make an accurate exposure. In fact I can't imagine a better way. And yet many people still advocate using the Zone System. But I fail to see it's advantages.

There was recently a similar question: Is the Zone System useful with a DSLR?. While it gave some interesting references the replies were bland statements of the form 'it is worth it'.

So I am posing the question in a more direct and specific form in the hope I will get more specific answers:

Why should I use the Zone System when the test histogram and image seems to give me all the information I need?

I use the zone system as it gives me total control over the exposure. A lot of photos I take do not have the even distribution of tones that would result in an even histogram, especially some of the gig photographs where the singer is the only light part of the photo and the background is very dark, if not pure black. The histogram for an example of these shots looks like this:

But the photo, which to my eyes is correctly exposed, looks like this: 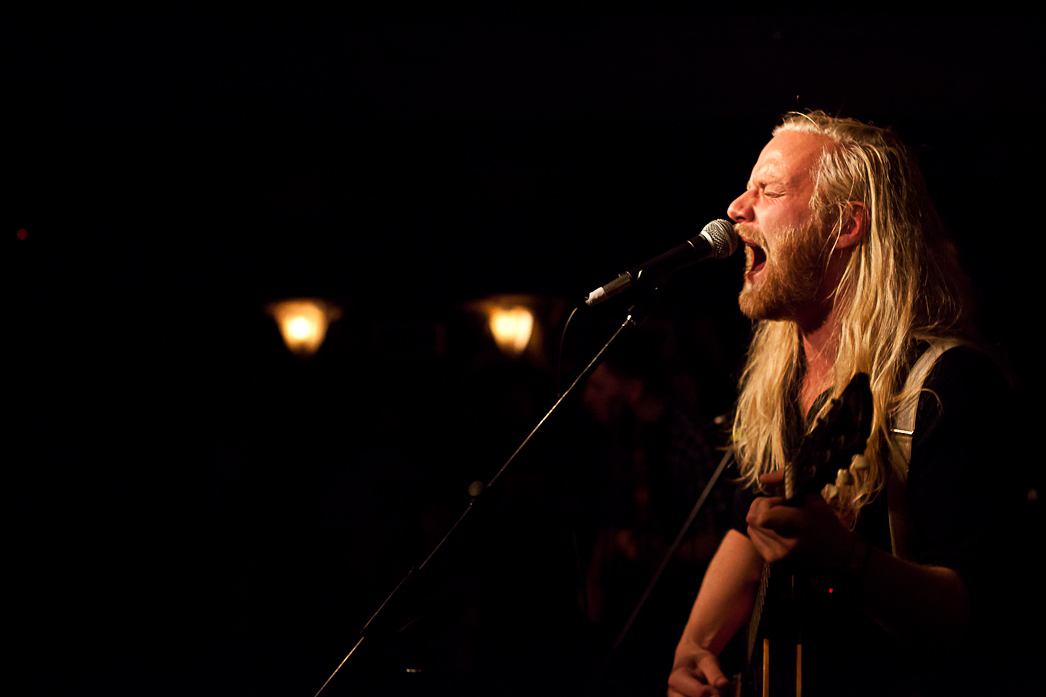 I don't think the histogram works in ALL situtions, whereas the zone system does. For this reason alone, I think it is preferable.

Ansel Adams, who invented the Zone System is still a clever chappy.

The zone system is a way of categorising the tones that we can see. A digital camera can only see about +/- 2 zones from what you're metered for. So you have to make a choice on what you want to meter for, what you're willing to turn black or burn out. For me, it's about pre-visualising what you want.

I found this article in Outdoor Photographer valuable a while ago. Browsing it again, I'm realising I need to read it properly all over again. Hope you find it helpful.

Slightly off topic, this is what we're trying to do with HDR - to shoot over a wider range of zones so that we can merge them into a single image. This image will have reduced contrast because we're adjusting what we can record.

The zone system tells you what to base metering on in a scene of higher dynamic range than your camera could capture, and what you will gain and lose when changing the exposure either way - by adjusting exposure for a higher zone, you will push all the other zones down and lose your lowest zone (and vice versa for underexposing). For example, what was textured black would become texture-free near black - if your subject is a black animal, you will avoid such adjustment although it might bring your highlights into range.

If you can tell which zones different parts of scene are in, you can estimate how much dynamic range would be required, and if the picture will have as much contrast as you want it to.

There are several aspects of the zone system which can still be useful, and which the histogram doesn't represent.

First, you can use it as an aid to visualization of a scene before you take a picture. This is useful for any case where you care about composition, and this kind of forethought and planning will usually pay off with better results than unconsidered snapping. Now, I don't think you need to use the particular zone system scale to do this, but thinking about the scene before you in terms of relative level of brightness is a worthwhile exercise.

Second, unless you have a better histogram tool than I do, the histogram doesn't really tell you anything about the relative brightness of different parts of the frame. You can estimate this some on review using the LCD screen — but that's exactly where the zone system concepts can come into play. As you're examining the test image, how do you decide on the relative exposure of tones? The zone system gives you a mental vocabulary for dividing the scene, and for deciding where you want each tone to fall in brightness. It's a way to think about what will happen to the rest of the image if you decide that a certain tone in the scene will be exposed highly or as shadow. The histogram shows you the sum of the entire image; this is about considering the different parts.

Finally, as you make adjustments to the image (in computer-based post-processing or simply through selecting image output options in the camera), you can use the idea of zones of as a tool for decisions about overall and relative contrast — the tone curves. That's not so valuable to me personally, but apparently enough people find it a useful way to work that there's a whole RAW processor built around the idea — LightCrafts' LightZone.

Not the answer you're looking for? Browse other questions tagged exposure histogram zone-system or ask your own question.

26
Is the Zone System useful with a DSLR?

120
How and why do you use an image histogram?
26
Is the Zone System useful with a DSLR?
8
How does TTL flash work in manual exposure mode?
3
How critical is it to expose raw images correctly?
0
Should I use EC when all details are captured?
17
How can I use a histogram to expose correctly when the scene is very dark?
12
How do the 11+ stops of dynamic range from a modern DSLR fit into the 10 stops of the zone system?
6
Live view underexposed at close focus with Canon 100mm f2.8L Macro
5
Why doesn't Darktable's histogram match the one my camera shows?