I have a Fuji X-T100 and its lowest ISO setting is 200. Now, I’d like to shoot some slides like Provia 100 or Ektachrome 100 as well as Portra 160, using my Fuji as a light meter (it works pretty well for Portra 400 when I set the ISO to 400 on my Fuji, and then adjust aperture and SS and use those settings on my analogue camera). What can I do? I don’t really wanna push those films to ISO 200...

ISO100 needs double the amount of light as ISO200. So you can either double the exposure time, or open the aperture one stop (a "stop" being a factor of 1.4, roughly, corresponding to doubling the aperture area). You actually should practise thinking in stops since the recommendations of your digital camera will depend on the sensor size and stops it has available for its own purposes and does not take into account what analog camera you are working with. The list of stops basically is f:1.4, f:2, f:2.8, f:4, f:5.6, f:8, f:11, f:16, f:22. It's not likely you'll have to worry about f:1 ever, but f:1.2 (for some rather special fixed lenses) is half a stop down from f:1.4 and there are, obviously, other half-stops in between the full stop numbers.

So to map from ISO200 readings to ISO100 you can either a) double exposure time b) open the aperture one stop (which means going to a larger value of f:x and consequently a smaller value of x, the number part of the aperture specification, since f:x is a fraction)

If you want to use your Fuji for not only guessing the lighting but also the depth of field (you likely need to half-depress the shutter for that), you'll want comparable apertures, and those require actually plugging in the respective values of f. The Fuji has about 24mm sensor width, a 35mm analog has 36mm, so you have comparable depth of field when the analog camera is about one stop slower than the digital camera for equal framing.

So if you are aiming for equal depth of field for half the ISO, you'll need to close down the analog camera one stop as compared to the digital camera's recommendation and expose 4 times as long. Usually, you'll prefer exposing shorter and probably even opening up apertures which means that you'll have to watch your focus, its depth, and its effect on framing quite more than on the APS-C size sensor.

Keep the camera in jpeg as it appears shooting RAW limits it to ISO 200. 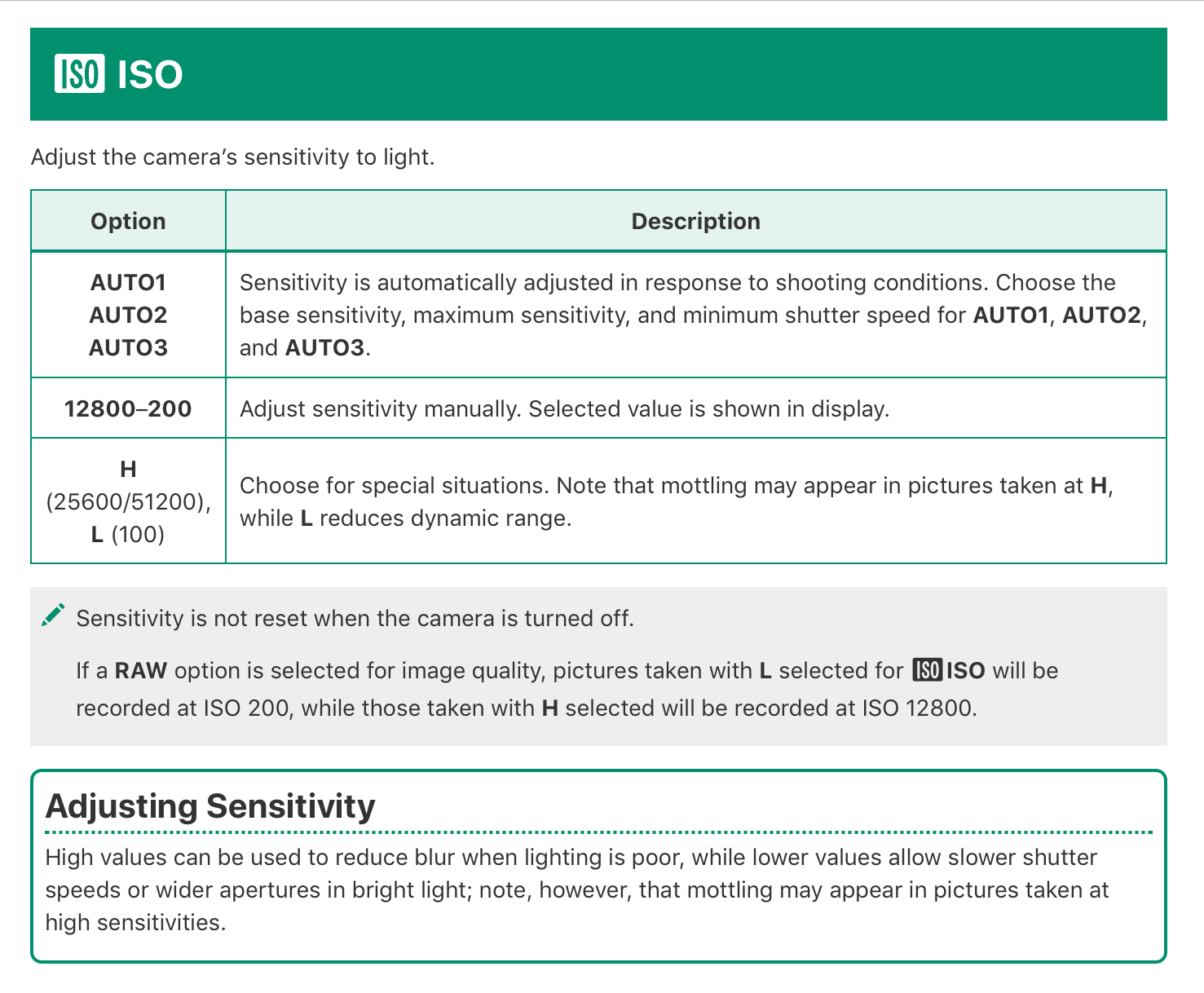 An ISO 100 film is exactly half as sensitive as an ISO 200 film. It needs a shutter speed that is twice as long as that needed by the ISO 200 film.

Similarly, an ISO 160 film is exactly half as sensitive as an ISO 320 film. It needs a shutter speed that is twice as long as that needed by the ISO 320 film.

That is... Meter using an ISO setting of 200 respectively 320. Double the shutter speed in your head.

Not the answer you're looking for? Browse other questions tagged exposure iso metering or ask your own question.

155
What is the "exposure triangle"?
4
With the same camera settings, will a photo always be exposed correctly across different cameras?

22
What exactly is "base ISO" and how do I find what is base ISO on my camera?
7
When determining exposure, is ISO typically taken into consideration secondary to aperture and shutter speed or is it equally as important?
6
What ISO do I shoot Ilford Delta 3200 in?
7
Is analog gain really actually power-of-two only?
3
Can I use chemicals for developing ISO 400 film to develop ISO 100 or 200 film as well?
1
Metering without a incident light meter
2
Can I use my full frame digital camera to set up the exposure for my medium format film camera?
1
Why did my Canon 80D recommend such a fast shutter speed in near-total darkness?
1
Film exposure accident.. Help!