And, from the other side, from the objects view, if you were to look at it - possibly shining a light at where the camera lens should be, the light is refracted off the beam splitting glass and thereby not reflecting back.

If anyone could please help me with this problem or even point me in the right direction it would be greatly appreciated. It is hard to get in contact with a lot of the beam splitting glass manufacturers - big and small

Edit: Now that I've already posted the answer, I realized maybe you only need a simple one-way mirror setup: you just put the camera in a dark room or a box and use the beam splitter as a window from which it looks into the brightly lit room with no light directed straight into the window. The brighter the room and darker the box, the better the effect.

It is impossible to make the lens completely disappear, but you can hide it with a much brighter light coming from the same direction. A setup that does this is called coaxial lighting. It is sometimes used in the machine vision industry when you need to illuminate the object from exactly the direction of the lens.

Here is an ugly sketch made by hand. 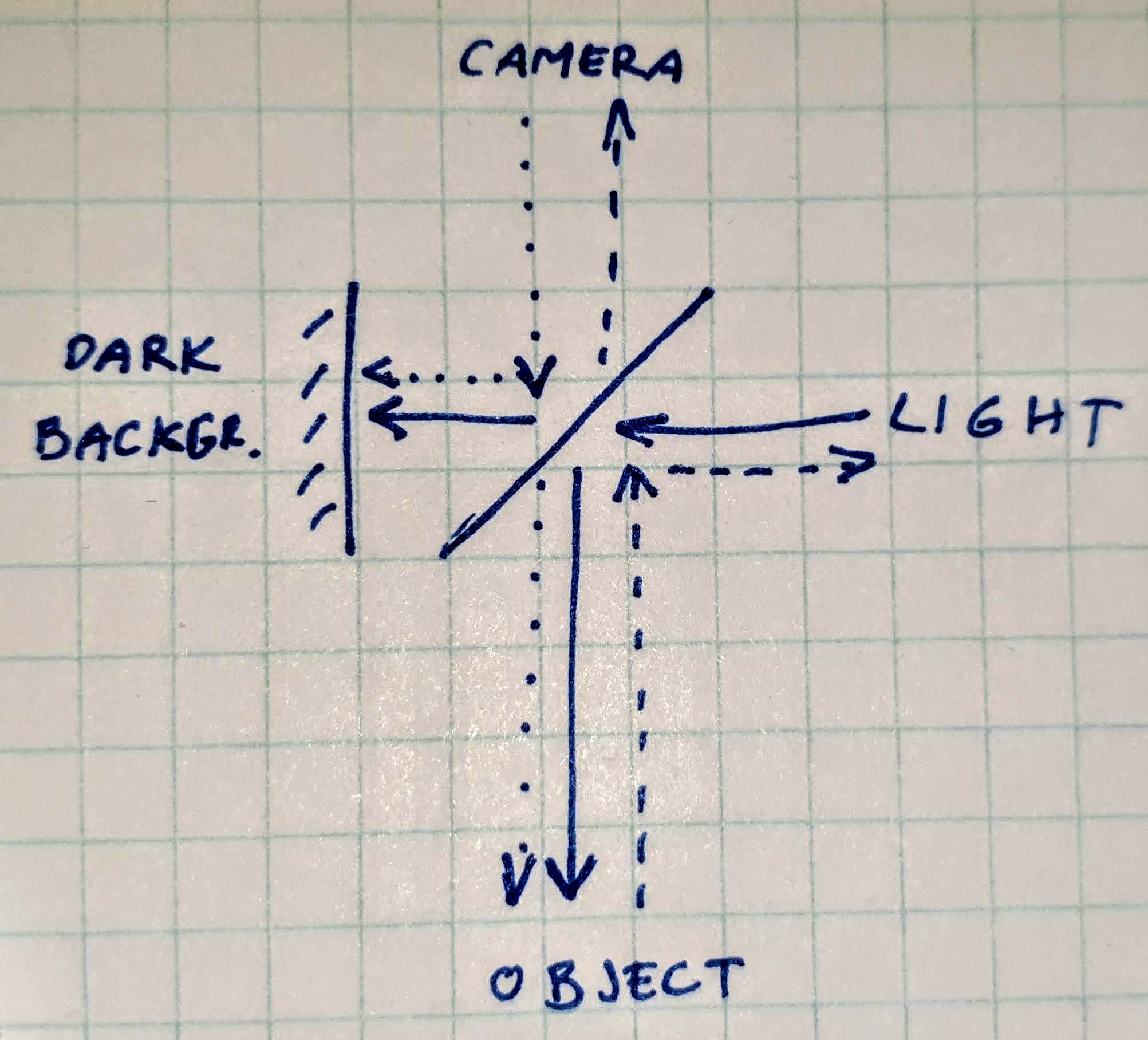 Full lines represent the beams coming from your light source. Half of them reflect towards the object, half is lost by going straight through the beam splitter to the dark background.

Dashed lines represent beams coming off of your subject (the ones you want to capture with your camera). Half of them go straight towards the camera, half get lost by reflecting towards your light source.

Dotted lines represent the field of view of the camera. Half the image will come from the actual object you are trying to capture, but that image will be mixed in with a half of the dark background. This is why the background needs to be very dark (in the setups I've seen, it's some very black velvety material): it's illuminated by as much light as the object itself, but you want it to still be much darker than the object so the effect on the image is negligible. If it's not dark enough, the image will have a sort of a grey sheen over it.

Some other remarks. As you can see, a lot of light is wasted with this setup. Only 50% of the light will reach the object, and then you will only see 50% of that light that bounces back to the camera. So you're only using 25% of your light source's light. If you're only using this setup to hide the lens, then it's not such a big deal because you'll only lose 50% of the other light source's light (the ones not shining through a beam splitter).

Front projection systems were once popular. A slide projector is mounted 90 degrees to the lens axis. This slide projector has a dual light source. A standard projector lamp and an electronic flash tube. A lenticular screen is positioned behind the principle subject. The image forming rays from the slide projector bounced off a beam splitter mounted just before the camera lens. The subject is illumined by speed lights. When the camera fires these lamps plus the flash tube in the projector flash. The resulting image depicts the subject surrounded by the projected background image. In other words, beam splitter photography is doable. You should have little difficulty.

Not the answer you're looking for? Browse other questions tagged optics security stereoscopy or ask your own question.

9
Why are objects far away inverted through a lens but not through the viewfinder?
6
Use of DOF adapters in stills photography
7
What could cause this visible artifact which seems to a be a glowing inverse of something outside of the frame overlayed on this photograph?
1
Does the sensor size matters in the size and weight of an equivalent lens? Why?
1
A projection of a real-image is one fixed perspective, but looking through the lens with my eye, I see many perspectives. Why?
24
What is the farthest a camera can see?