I am developing a backlog of black and white films as I haven't had access to my darkroom for a while. I am doing Fp4 - 120 - taken with a Yashica and developing in the same tank using Rodinal / modern equivalent. All going well, 8 films done ( fresh dev each time) when one of two films comes out with fine tonal ribbing over the whole length of the film. At first glance the negs are good, the ribbing is subtle. I have been developing my own films for a long time, but I have never come across this. I don't want it to happen again so what has happened here? This particular film was 2 years waiting to be developed, the other Fp4 in the tank at the time was "fresher".

From your description, the problem is called reticulation. Reticulation is the swelling of the film emulsion gelatine until the surface fails. The pattern can be found on the whole surface in both image areas and non-imaging area alike. The emulsion is quite sensitive to abrasion when reticulated. 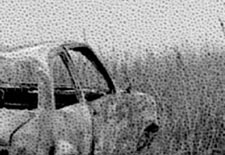 Older film stock seemed to be more prone to reticulation than some newer (and maybe thinner) film stock emulsions.

The damage can be traced to a few causes; but, once it happens, the damage is done. The pattern will remain even though the film is carefully handled and dried completely. Re washing and drying may make the problem worse.

That said, the reticulation pattern is so distinctive that some like it and try to create it going to great lengths to undo the preventive measures taken by manufacturers to avoid it.

The structure of photographic film is multiple layers applied onto a transparent support. Each layer has a different coefficient of expansion. What I am talking about is: when film is wet with the solutions of the process, these layers swell much like a dry sponge does when plunged into water. Swelling is essential, as this allows the fluids of the process access. At the end of the developing process, the film is dried. As it dries, it shrinks back to its original thickness. Now each layer has a different swell and shrink rate. We minimize these different rates by attempting to keep all fluids, including wash water, at nearly the same temperature. If the various fluids are allowed to be different as to temperature, it is likely that some of these layers, as they expand and contract, form a rift. The rift at its extreme resembles shattered glass. The extent of this rift can also thin like a filament. In any event, this is called reticulation and the pattern often looks like a jigsaw puzzle. To prevent this, we keep all fluids, including wash water, within a few degrees of temperature.

Not the answer you're looking for? Browse other questions tagged film troubleshooting negative or ask your own question.

2
Negatives came out very thin
1
Does film (get a chance to) degrade before sale?
3
Why does develop+scan cost the same as scan only?
6
Tri-X compared with HP5 plus, grain
2
Development times for Russian mystery "A125" film
0
One transparent negative when developing 2 rolls at once
4
Developing Problems, maybe with JOBO developing tank?
1
Color negatives came out blank
2
What is the cause of this very grey film base?
9
Developed film has dark/bright wavy line spanning across entire film