How to get lens serial number from Exif?

I want to write down model name and serial number of my camera body and camera lens, in case they are lost or stolen.

Apparently Canon only started including an "internal" lens serial number field in the EXIF info when they started including the ability for cameras with AFMA (Autofocus Micro Adjustment) to discriminate between two copies of the same lens model.

When using Adobe products (such as Lightroom or ACR), the field is never included in the EXIF info displayed by the application. Canon's own 'Digital Photo Professional' does not display the lens ID number, either. Using other third party applications, such as 'Irfanview', does show the lens ID number included in the EXIF info for cameras with AFMA that can discriminate between two copies of the same lens model. 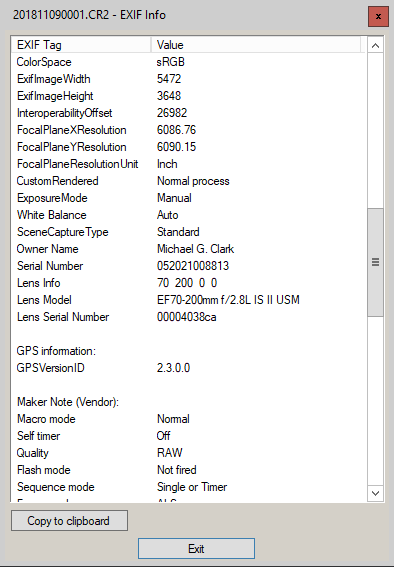 The screenshot above was taken from an image captured with a Canon EOS 7D Mark II using an EF 70-200mm f/2.8 L IS II lens manufactured in 2010. The 5D Mark III I use regularly also includes the internal lens serial number in the EXIF info. My older Canon EOS 7D and Canon EOS 5D Mark II do not include the field, even when the same lenses are used on both sets of cameras. When an older lens model that does not communicate an internal lens ID to the camera is used on one of the newer cameras, the field is reported as '0000000000' (ten consecutive "zeros"). This is even the case with a newly made copy of an older lens design. The EF 135mm f/2 L is a lens model first released in 1996. My current copy was manufactured in September 2016. The Canon EOS 5D Mark III reports the internal 'Lens serial number' as '0000000000'.

This "internal" serial number is a different number from the external serial number printed on the lens barrel or flange mounting ring, even when the internal number that appears to be at least partially in hex format is converted to decimal. It is presumed by many to be a number that is uniquely assigned to only one lens ever made by Canon. At the very least, it is almost certainly a number that is unique for all copies of that particular lens model. Canon probably uses a separate "internal" serial number in order to standardize the format for all of their various lens lines, which can vary significantly in terms of the number of digits included in the external lens serial number. There also seems to be at least some cases where the same external serial numbers have been used for two different lenses in two different model lines.

Please note that the actual date of manufacture of the lens does not seem to affect whether the lens provides an internal serial number or not. It appears to be when that lens model was introduced.

¹ Another classic example: Canon bodies introduced from about mid-1993 had the ability to control Canon EF lenses with IS. No one, other than those on the inside at Canon, had a clue the bodies they already owned included this ability until the first IS lens was introduced in 1995 and Canon released a list of existing models that already had compatibility with IS built in. Another example: For several years before the release of the 470EX-AI, Canon bodies as early as the EOS 7D Mark II introduced in late 2014 included the needed firmware to control the new self aiming bounce feature of the flash that was introduced in early 2018. Canon made no public announcement about the ability included in these camera bodies (7DII, 1D X II, 5Ds/5DsR, 5DIV, 6DII, Rebel T6i/750D, Rebel T6s/760D, Rebel T7i/800D, 80D, 77D) until they announced the new 470EX-AI flash in early 2018. 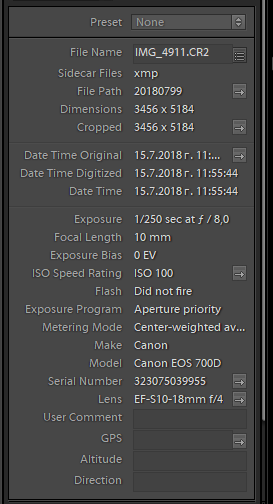 From other site when I try XNview (no affiliate with the software) I see in Properties->ExifTool the serial number of my lens. 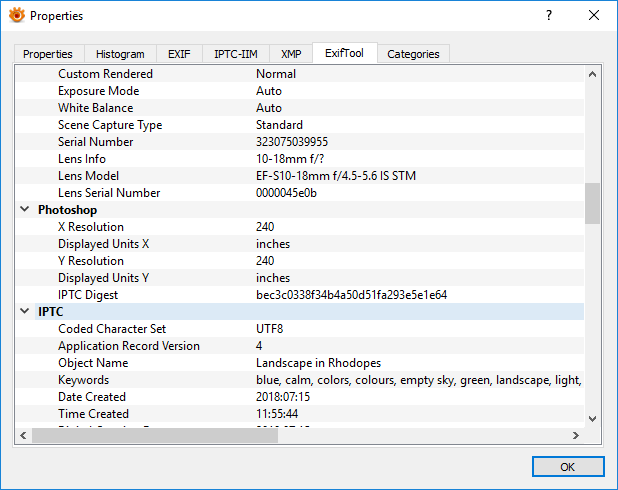 So for me Adobe do not display all the meta information. My advice is to use other tool(s)

P.S. And one clarification, this is NOT the serial number of my lens (as I can read it on the lens itself). So seems like camera do not include it (on correct way). When I check with other (again Canon camera with Canon lens) I do not see at all lens serial number in LR. But in XNview I see the correct serial number of lens.

The lens serial number isn't set in any picture I have. Photos from my 450D haven't even got the field, and those from my EOS70D have the field, but set to all zeroes.

Reporting the lens S/N is likely a recent feature, and to see it requires a recent camera and a recent lens while your lens design is from 1992...

To grab the data, there are other tools than LR...

Whether the lens serial number is included in image metadata depends on both the lens and camera. Many Canon cameras and lenses do not communicate the lens serial number. The only reliable way to know whether a particular combination provides the information you desire is to check for it in images.

Many graphical-interface metadata viewers do not show all available tags. Use exiftool instead.

Not the answer you're looking for? Browse other questions tagged lens lightroom metadata or ask your own question.

8
How can I compare the lens serial number from the EXIF of a picture, to the serial on my lens?

26
What photo-sharing websites expose camera serial numbers?
7
Why does Adobe Photoshop discard certain EXIF fields?
12
Is it safe from a privacy and security point of view to display identifiable EXIF data on a public web site?
8
Is there a free piece of software that will export metadata for a folder full of images to a table?
1
Does Lightroom or a RAW format store the original rotation of an photo?
0
Prevent Lightroom from discarding lens model from EXIF
2
How to filter photos in Lightroom 6 by EffectiveMaxAperture EXIF tag?
0
How to copy EXIF metadata on Android from one photo to another?
2
Can Tamron Tap-in Console solve focal length problems in metadata?