Will using a hotshoe flash with camera give me clearer/cleaner picture results?

I know there are a lot of cameras out there that take awesome night pictures. But whenever I'm on a wedding and we are taking picture in the dark outside, using only the camera's pop-up flash the picture doesn't have that cool effect I want. I want a cleaner look. I know it won't look like a picture taken in daylight, but I want the pictures to be as clear as they can be.

So I was thinking, if I increase the amount of light with a hotshoe flash, will the picture be better?

Photography is always about light!

When you are shooting in a very dark place, you must provide the light. You must consider not only the amount of light you need, but the shape and direction of the light you need to get the results you desire. Although camera based flashes will allow you to take a photograph in the dark, the results will generally look flat and dull because the light is too close to the center of the lens' optical axis.

If you must use a flash attached to the camera, a good option is to use one with the ability to bounce the flash off a nearby ceiling, wall, or reflector. Such flashes have heads that tilt and rotate so they can be aimed at a reflective surface rather than straight ahead at your subject. This gives much of the same effect as an off camera flash, but you have less control over the shape, distance, and precise direction of the light.

To get top notch results, you need to provide light sources not attached to your camera. You need to select modifiers (softboxes, umbrellas, grids, snoots, etc.) to shape that light to give the look you are after. When the photographer has total control over the lighting, pretty much any camera that can properly trigger the lighting can give you good results.

One place to begin learning about how to light your shots instead of depending on the existing ambient light is at David Hobby's blog and website: Strobist

DISCLAIMER: I am totally not into portrait or wedding photography, so I can just give some basic advice here.

Built-in camera flashes are a tool for purely documentary photography (eg of an accident - if the wedding has any similarity to an accident, all bets are off though...), or for emergency use (you need to shoot at night and have no other flash with you). They are so bad that many users forget they have one - someone who brought a camera with a built in flash and didn't bring an external flash might tell you "I have no flash at all"!

An external flash mounted directly on camera shares some of the drawbacks - it is not as weak as the built in flash, but still too close to the lens axis. While a flash close to lens axis avoids hard shadows, it also results in pictures with very little definition in bright areas (eg faces!) and brutal specular highlights.

If you are doing these kinds of photography in any other capacity than as a guest doing it for fun, you should invest into at least two external flashes that can be tied in to your camera's TTL system via either a long cable or a wireless link. Ask for just that in a camera store. While it can be done with simpler/older/cheaper flashes (telecomputer style or manual power setting style) that do not integrate with TTL, using such in that context is fun but HARD and takes practice and understanding. Also get stuff like reflectors, stands, softboxes, maybe also gels...

And read/watch books and tutorials on lighting....

If there is not enough light, you have two options, you can make it such that your camera needs less light, or you can add light to the scene.

Making your camera need less light. You could buy a new body, but it will probably give you one extra stop at most, and it is usually very expensive. Buying a faster lens is usually a much better option. A 50 mm f/1.4 can give you 3 or 4 stops extra for a fraction of the cost of a top body.

A flash is the usual choice if you want to add light to the scene. Using the flash off-camera with modifiers gives the best results. But with modifiers, we mean real modifiers, such as a 5 feet umbrella. Those little diffusers you clip on a flash don't help much. This is quite difficult, and not really practical in many circumstances. I would recommend starting with the flash on-camera. The problem with the flash close to the camera is that there are hardly any shadows. You can improve this by turning the power of the flash lower until the natural shadows come back a bit, or you can bounce the flash off a wall or ceiling. Some gel filters are needed though, they are the only way to adjust the white balance of the flash.

Adding a hotshoe flash can certainly help you out in this type of situation, but just pointing it forward and blasting your subject with more light is going to look a lot like using the pop-up flash only brighter.

That flat, white, deer-in-the-headlights look basically comes from using a light source that's very near the lens. With a pop-up flash, you don't have much of a choice about this. But with a hotshoe flash, where the head tilts and swivels, you actually can use the flash in a certain way that makes the light directional and more diffused, and that technique is called bouncing. With bouncing, you point the flash at a reflective surface (wall, ceiling, reflector, white shirtfront), and use the light coming off the reflective surface as a point of illumination. But, you will have to flag off the flash, if you want to keep any direct light from the head of the flash from hitting your subject, too.

And, of course, you'll be limited by the availability, distance, and color of said bounce surfaces. A heavily colored wall will lend its color cast to the bounced light. May be a problem. May not. But if you're shooting outside, you may not have a bounce surface nearby. So maybe you can find one or make one. But you may also have to look into off-camera lighting.

Off-camera lighting is where you take the flash off the camera, put it on a stand, and position it where you want, and then trigger it somehow from the camera (often radio triggers). You'll probably also need a modifier to soften the light (umbrella/softbox). So the tradeoffs are, you may not be particularly mobile, and you might have to carry/buy a bunch more gear to do this type of studio lighting. You can also just hold the flash in your left hand while you shoot with the camera in your right, and get a little more separation that way, but this tends to be a bit of a compromise situation.

Ultimately, learning to light is more than just adding light to a scene; it's about shaping, creating, and controlling the light.

In today's day and age of wedding photography, off camera lighting is really the way to go. If you aren't using off camera lighting at least for parts of the wedding, you are really employing very amateur techniques. Wedding photography has been more and more competitive with the affordability of lighting equipment and the small compact sizes power flashes have raised the bar and the client expectations.

There is a place for on camera flash, but really it is just bounced flash and it just gives some boring even lighting that is okay, but to really create some amazing pictures, the light has to come off the camera axis.

Here is a photo I taken at my last wedding. It was a two light setup using small Godox AD200 with a MagMod MagGrid on camera left and a MagMod MagSphere on Camera right. Set this up in literally 15 seconds. 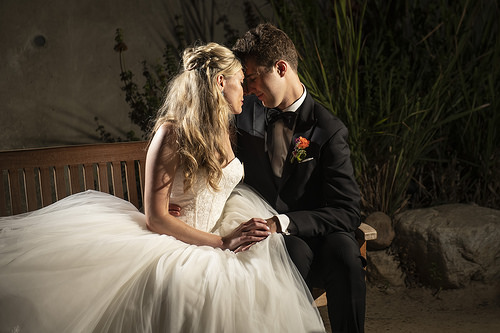 During the day, I used the sun for a back light to the left and the Godox AD200 with MagSphere to camera right for a Key Light. Setup this in 5 seconds and was shooting away. 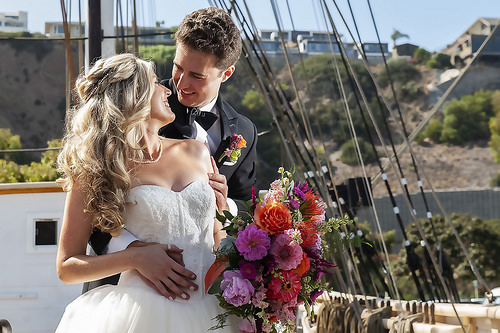 It is really important to implement off camera lighting techniques to really set yourself apart from the competition. But then again, I am not sure what your rates start at, as expectations certainly are different for different price ranges.

Not the answer you're looking for? Browse other questions tagged hotshoe-flash night-photography or ask your own question.

5
More powerful battery for on camera flash on Canon 5dMkII
7
How do I start using a hotshoe flash?
1
Cons of using a manual flash on-camera as well?
3
Why is the on-camera flash trying to pop up when using a D7000 with a MK930 Speedlite?
1
Fire speedlite 580ex with on camera flash (without transmitter)
2
Can I trigger a Nikon SB-600 off-camera with any other flash on the hotshoe?
0
Inconsistent TTL results when flash used off-camera (YN565 EX II)
1
Why is my 430EX firing sporadically on my 40D?
0
Why won't my camera communicate with a new flash after doing an experiment with an older film camera flash?
3
What speedlites can work with the Canon non-standard hotshoe found on their low-end camera models?