How did John Cheng create his photograph of Simone Biles at the FIG Gymnastics World Championships?

Question: This photograph was taken by John K Cheng, staff photographer of USA Gymnastics. Which techniques or camera equipment were employed to make this shot ? 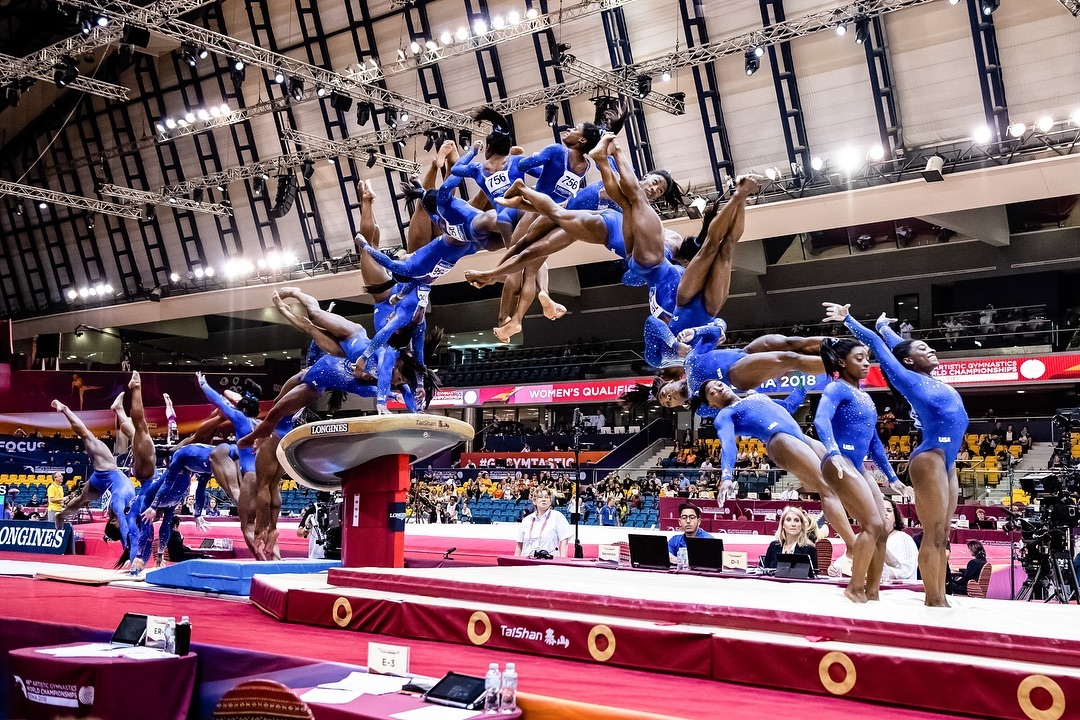 Here is a video of the actual vault you can see Cheng shooting the shot.

It's better than the attempt I made in 2004 at the Olympics in Athens to do something similar. I took multiple, normally-exposed photos, and digitally stitched them together later. 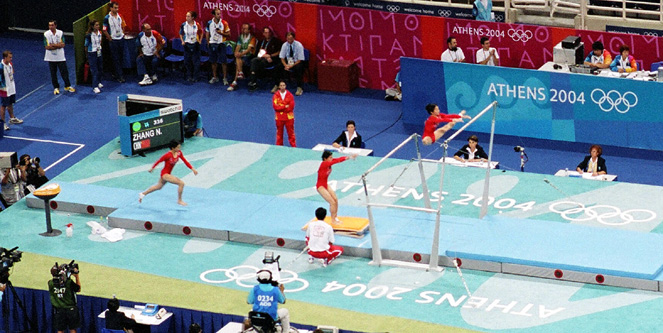 John Cheng here. Just found this so here it goes:

This illustration was shot with Nikon D5. I was position probably 30 degrees off to the side of the vault, pre-focused on the vault table with a 24-70 and just let her ripped before Simone hit the board. I don't exactly remember how many frames were used but I cut out each Simone and kept the vault table as a reference point to accurately preserve each body position in the air, then layered each image to create this illustration. I kept the background from one of the last frames (you can see the judges are all focused on the landed Simone). The key to make this work is to keep the camera still and not pan with the subject.

It was a little side fun project I did while I was in Doha when I had some downtime from shooting gymnastics. I'm really happy how it came out.

This isn't really "a" photograph. It's what's known in the photojournalism world as a "photo illustration" that allows the photographer more leeway in producing an image.

Not only have multiple frames been combined to show the various positions of the athlete as she performed a vault, but it looks like a lot of tone mapping and detail enhancement has been done as well. Tone mapping and detail enhancement are two of the main things that are often used when processing "HDR" images created from bracketed exposures. But the same processing techniques can be used with single images or a series of images all shot at the same exposure. Even apart from an "HDR" application, the controls for contrast, highlights, shadows, blacks, curves, etc. can do tone mapping. Masks and layers allow one to apply specific adjustments to parts but not all of a scene. Sharpening settings, particularly the "unsharpen mask" can do a lot of the same thing as what HDR applications call "detail enhancement" or "clarity." Likewise, a lot of individual adjustment of different colors with an HSL (Hue - Saturation - Luminance) tool can mimic use of a "vibrance" adjustment.

I'm guessing, based on the quality of the image, that the individual frames were not video frame grabs, but rather high resolutions stills from a high fps (frames-per-second) camera such as the Canon EOS 1D Mark II (up to 16 fps), Sony α9 (up to 20 fps), or the Nikon D5 (up to 12 fps).

Not the answer you're looking for? Browse other questions tagged sports or ask your own question.