Is this lens decentered?

I bought a second hand lens yesterday, but I'm not sure if it's decentered or not. When buying it, I did some tests to make sure it was not decentered, but when I repeated the test at home I'm not sure of the results. 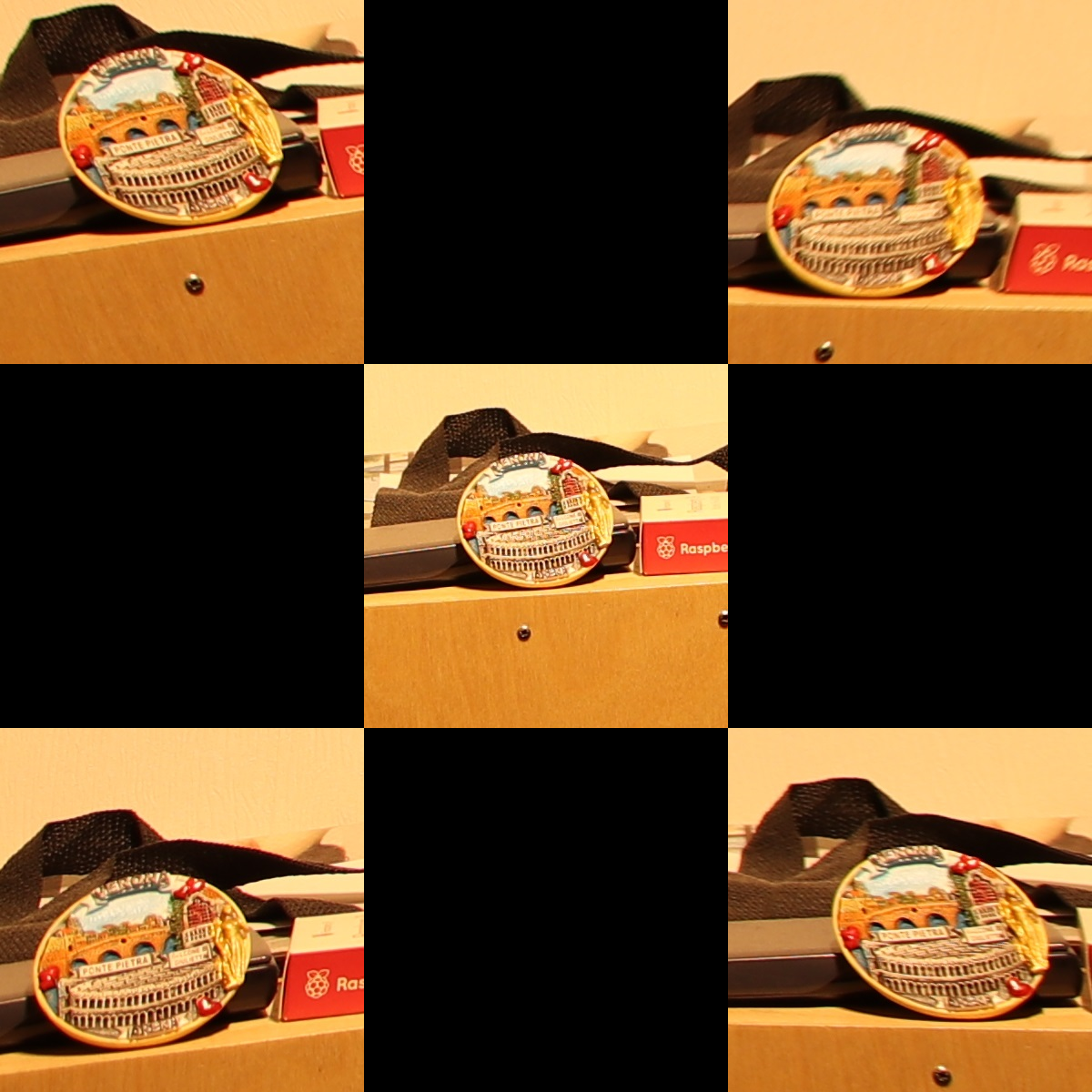 The top right corner is obviously less sharp then the other corners, and the top left and bottom right are a little less sharp than the bottom left. But my question is: is this acceptable? Because i heard a little bit of decentering is quite common, and this is my first experience with testing a lens so i'm not sure.

I tested the lens according to Michaels answer. I got these results: 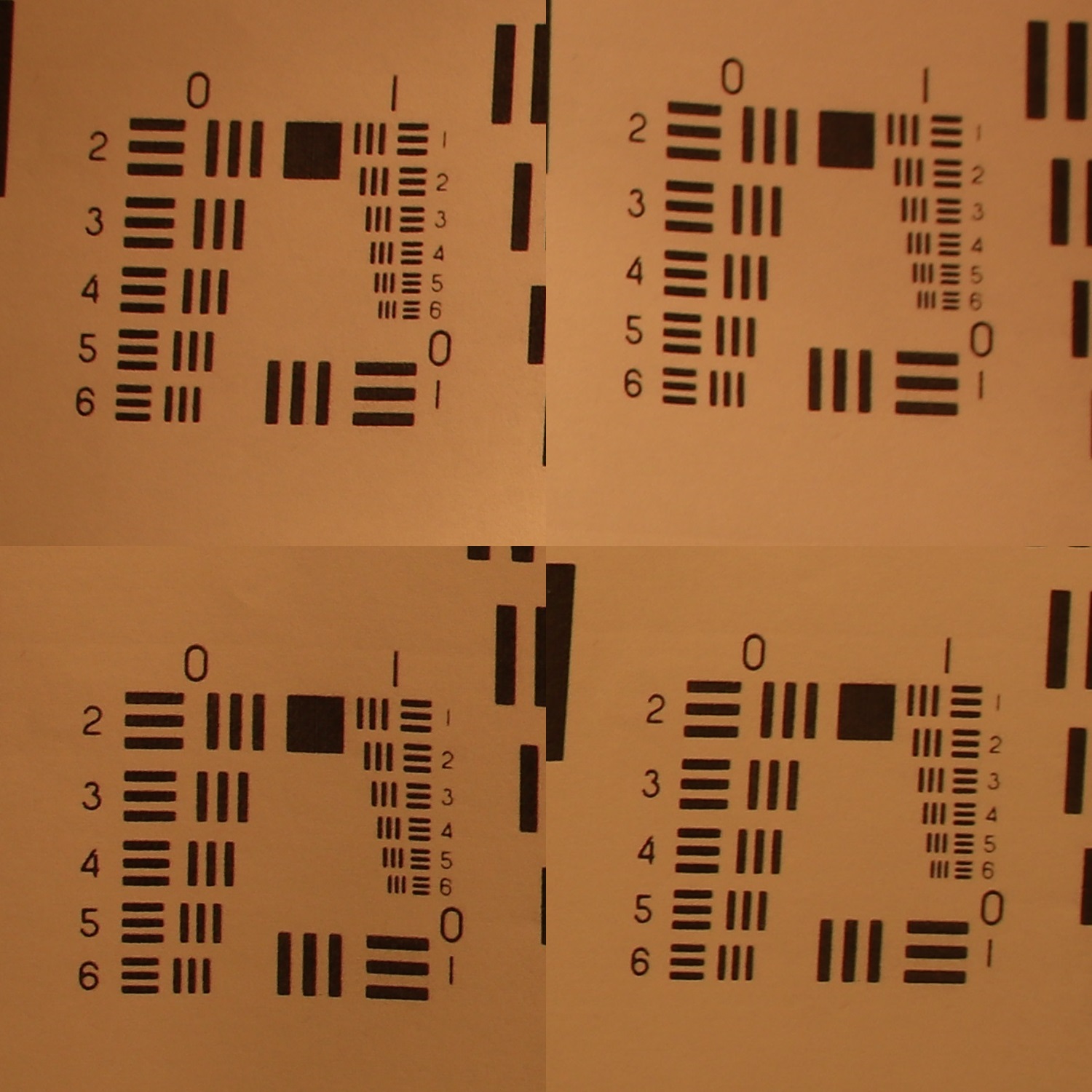 These images are 750x750 crops. The top right corner still looks less sharp than the other corners. I still have the same question, is this acceptable?

When you move the camera around on the tripod, you change the relative distance from the optical center of the lens to different areas of your scene. This affects how sharp a particular thing will look because if the optical distance changes (because the optical center of the lens moved in an arc created by the position of the tripod's axis of movement) and the lens is not refocused, the point of focus will move in front of or behind your object. This is why "focus and recompose" can introduce focus errors that are noticeable when shooting portraits at very narrow apertures.

The only real way to do what you are trying to do is use a flat test chart that is properly aligned to be parallel to your camera's sensor. Then compare each of the corners of the test chart from the same image or series of images taken without moving the camera or target.

If the chart is not properly aligned with respect to your camera's sensor, then the results could indicate lens tilt, lens decentering, other optical alignment issues inside the lens or it might just mean improper alignment of the test chart or a combination of both - there is no visual difference between them in the results.

The easiest way to align a tripod mounted camera with a test chart is to use a stable, non-distorted mirror such as one solidly mounted to a wall. Align the camera so that the center of the lens in the reflection is exactly in the center of the camera's viewfinder. The marking for the center AF point will help in this respect. Then tape your test chart to the mirror without moving the mirror even slightly. You're now ready to start taking test shots as long as the camera does not move in relation to the test chart. For the purposes of this exercise, pointing the camera in a different direction is moving the camera because you have moved the optical center of the lens closer to part of the chart and further from other parts of the chart.

Keep in mind that most lenses demonstrate some field curvature. The field of focus is not a perfectly flat plane, even with a theoretically perfectly manufactured lens. Lenses that are highly corrected for field curvature, such as many macro lenses, still have a field of focus that looks more like a lasagna noodle than a flat plane. They're not perfectly flat, they're just more flat than uncorrected or less corrected lenses.

A few years back, Roger Cicala, the founder of LensRentals.com, wrote an informative blog entry about How to Test a Lens.

Also related: Why You Can’t Optically Test Your Lens with Autofocus

I tested my lens according to your answer and edited my post with the results.

Based on the results of that test, I'd say you are still struggling with alignment issues between the camera and test chart. The test targets all skew in the same direction. That is, the top right is the weakest in all four quadrants and the lower left is the sharpest.

If the test chart were square with the camera one would expect the outer corners of each quadrant to be worse than the inner corners. In other words, the top right would look worse in the top right corner but the lower left would look worse in the lower left corner. It's possible tilt could cause the same thing, but a decentered element probably wouldn't.

As it is, the lower left corner is the sharpest, the top left and lower right corners are about equal and just a tad softer than the loser left. The top right corner is even softer. What would have been helpful at that point is to have refocused the lens until the top right corner was brought into focus as sharply as possible and then see what the other corners (and the center) look like.

3
Can a drop of a camera+lens cause AF calibration issues on either — or both — the lens and the body? What are the mechanics involved here?
0
Shadows in corner and dark pictures-stuck filter
3
What is the best lens for shooting flat surfaces?
4
What do resolution figures mean in lens specifications?
0
What kind of lens defect is this spot on my lens?
1
Can my copy of this lens (Pentax DA 18-135) have problems?
2
Are the artifacts I am seeing with my Samyang 24mm f/1.4 typical?
1
Left part of image is much softer than the right part: decentered lens or bad M42-EOS adaptation?
4
How to take photos of planets with smartphone?
3
Trying to understand effect of lens lp/mm on image pixels