TL:DR - is there a better/smarter/easier/more convincing way to light this?

I've taken on the challenge of photographing a friend's guitar collection.
I don't anticipate difficulties with most of it. I'll be doing some 'catalogue' shots; square on, then in tight to pick out details, and then some 'artistic' shots; at odd angles, against 'fun' backgrounds etc. - however I decided to start with the tough one.

A 1930's Regal Dobro - essentially a curved, engraved, box made of chromed steel. Let's assume for now that I can't take it outdoors & emulate the Dire Straights Brothers in Arms cover [& if only this Dobro was as simple a form as that one, but it's not]; that it's studio, black background.

I have 4 lights to play with. 2 speedlights in soft boxes & 2 constant video lights, with optional extra diffuser clipped over.

This is lit using...

The shadowing in that area is partly the softbox surround & partly just darkness from the rest of the room. 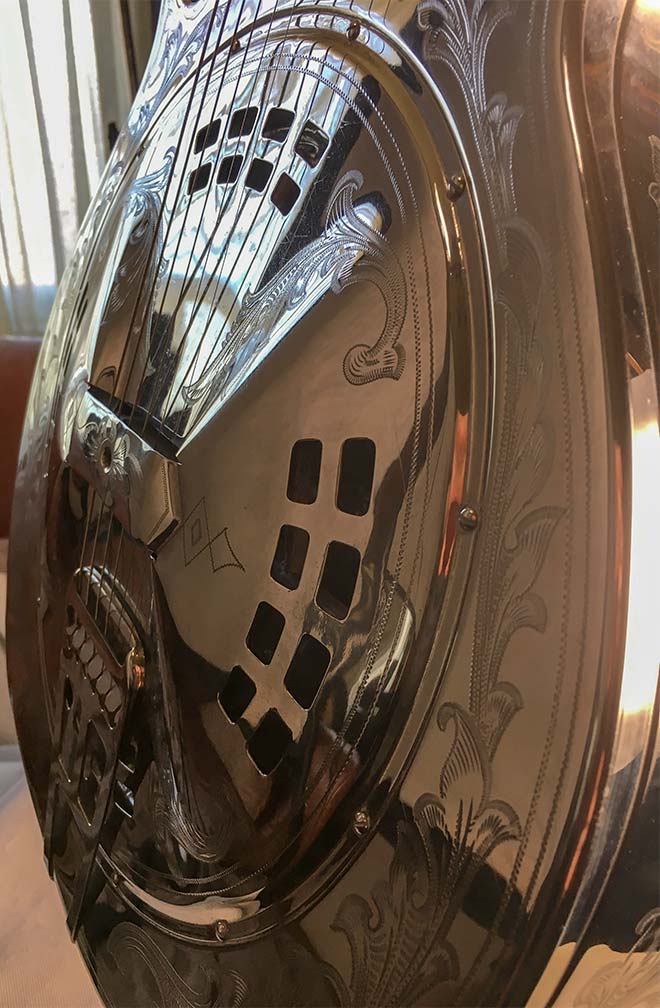 The only way I can think of to flatten out the light a bit without losing the shape would be to try surround it all in white sheets, then fire the flashes into those instead of just through the softboxes - but I cannot think of a practical way to actually achieve that.

So, any hints as to lighting or, heaven forfend, is it getting towards 'good enough' as it is?

Phone snap of the setup, from a metre camera-right so both speedlights can be seen - heavily punched up in Photoshop so you can see what's going on. 'Scuse the mess ;) 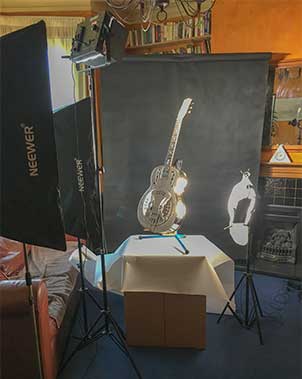 I've since tried surrounding it in white - or as much as I can with limited resources. Unfortunately all that is doing is 'flattening' the image & losing 'interest', so I'm still open to other ideas.

This is just work in progress, so hasn't had much tweaking. 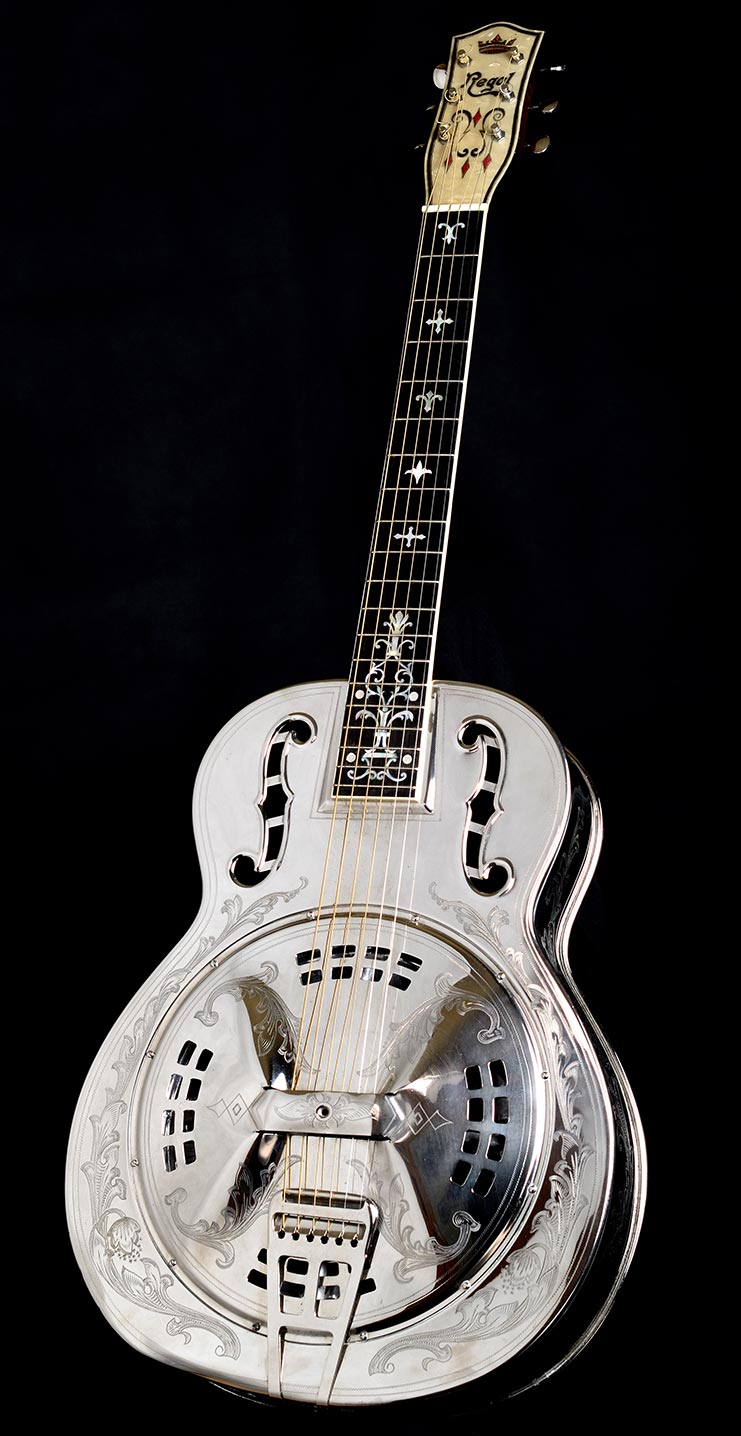 Create a light box. This will be a snow-white chamber made from bed sheets or better, Styrofoam board (Home Depot R-Teck 4’X8’ R-3 insulating sheathing #320821 $12.58). Buy some ¾” PVC white pipe and fittings. Construct a framework with the PVC pipe and apply the bed sheet or Styrofoam to make a white chamber. Place the object to be photographed inside. Light the translucent chamber by aiming at the outside walls of this diffusion tent. This lash-up will be devoid of shadows.

The mirror finish guitar should be placed inside a curved cyclorama so there is an even white reflection unbroken by black "gaps" caused by flat sheets of background.

This can be done with a normal white bed sheet or two hung from a round "shower curtain" type rod. The ends must be placed deeper into the set than the edges of the Dobro so the curved face picks up only the white background to allow the engraving to be uninterrupted.

Take the shot through the smallest opening you can manage. A hole between two sheets would be better than a vertical gap between them.

Here is the top view:

This is opinion-y, but too answer-y for a comment: I would say a nice complement to what you already have there might be some experimentation with bringing the softboxen in as close as you can. This simultaneously makes for a larger, softer source on the one hand, but can actually look less flat due to more dramatic light fall-off across the contours, and the fact that at close angles the contours themselves can contribute more variation in angles towards the light.

If you can stick the video lights in the boxes it'll make it easier to see the effect you're getting from different positioning (the recent availability of cheap, high-CRI constant light sources is something I'm really starting to appreciate).

Try to place the soft boxes one in each side of the guitar at 0 degrees from the each side and near to it. For the strings use a soft box pitching down from the front at a 45 degrees.

I agree on @Alan Marcus on the box. I have a ton of PVC pipes frames. But I need to be picky on materials.

But a white sheet does not work!

The diffuse material should make no hotspot. A cloth material makes a clear hotspot where the light passes between the threads (A). You can even see something if you put the cloth next to your eyes.

A good material makes no clear definition of the shape of the source light (B) and a really good softbox turns most of the surface into a diffuse source (C). This is important when photographing reflective objects because what you are photographing is not only the object but the surroundings. 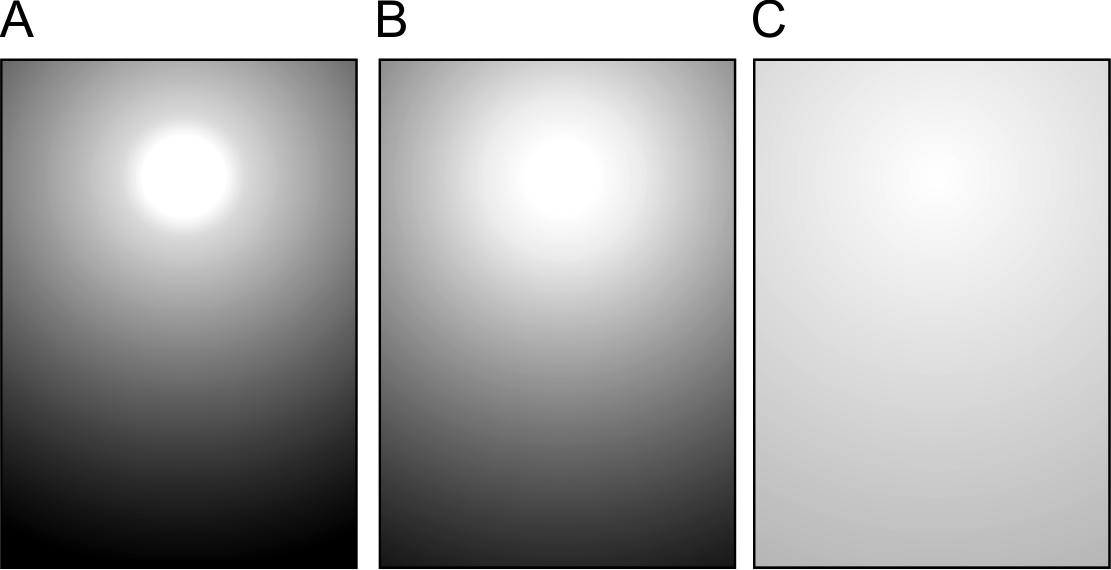 With the PVC box constructed, you need to define what style you want. Try different combinations. Play with 3 of the 4 sides of the box. 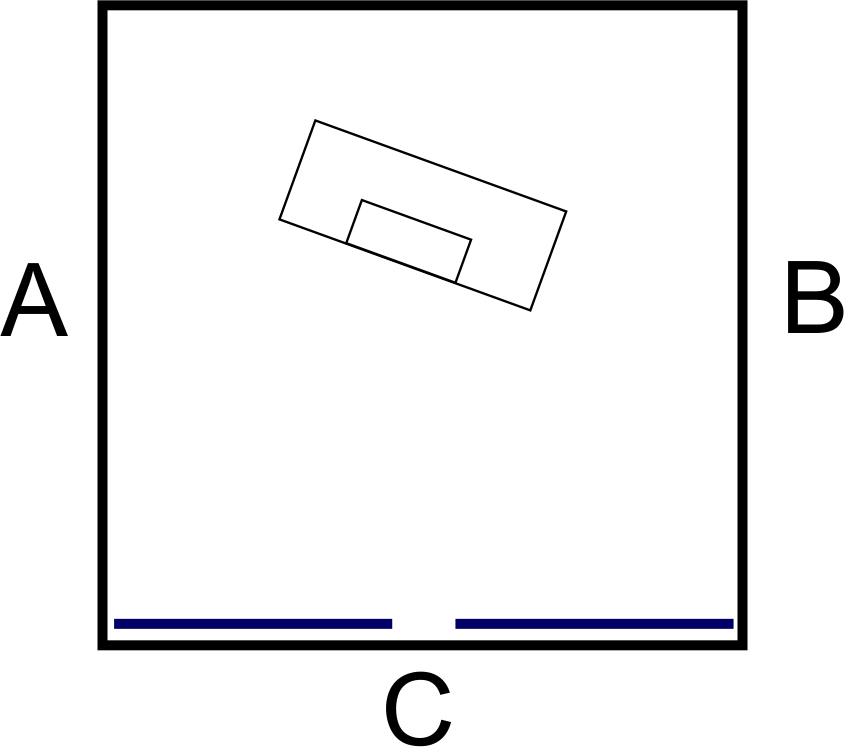 The panel C is important because you need to manage the aperture of a courtain depending on how far your camera is.

Normally you want this side black because it is easier to turn off the lights on the camera side so no reflections are produced there. But you can try making this white.

Also, you can define the color of the base and of the ceiling of your box.

You can play with this, you can still use your softboxes, making some flags using the box. 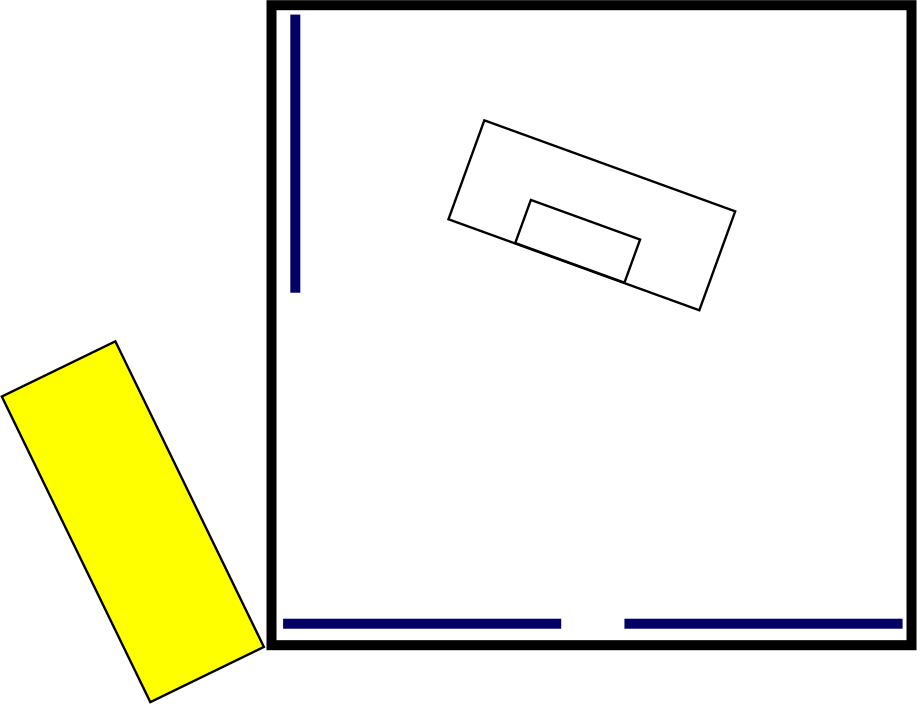 You can rotate the box to some degree 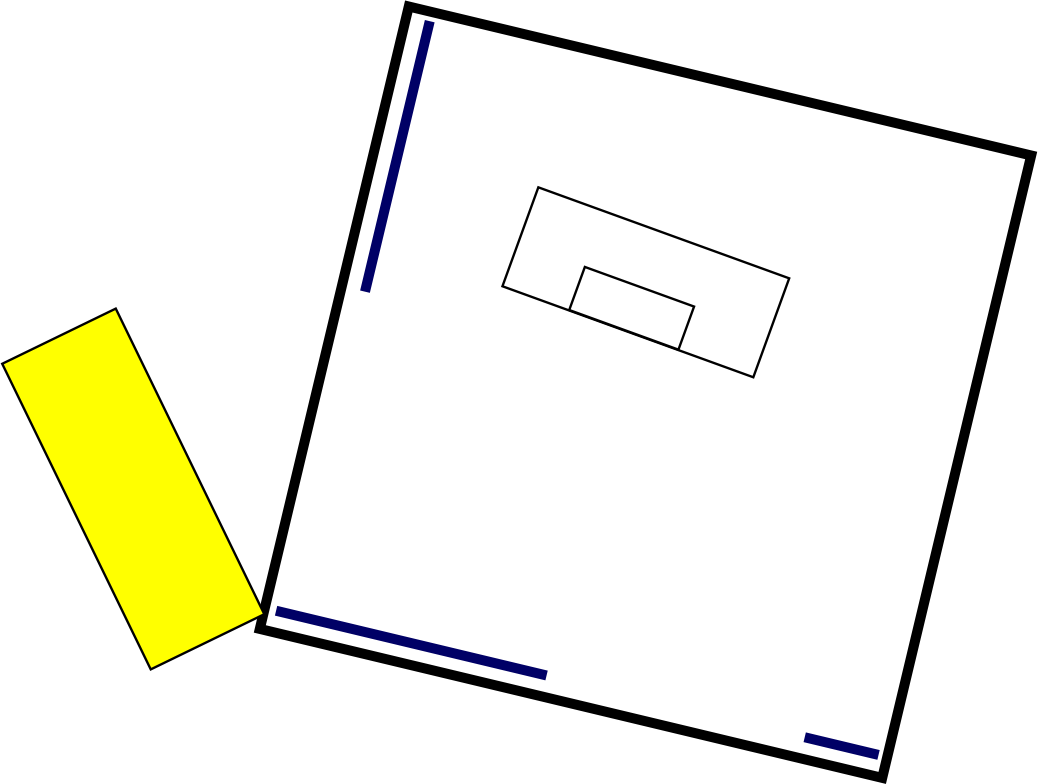 One important thing. Try to make the edges, the light source, the black or white sides as sharp as you can.

Not the answer you're looking for? Browse other questions tagged product-photography studio-lighting or ask your own question.

20
How can I photograph a reflective convex cylindrical trophy without reflections?