I've recently came across an image similar to this: (Source: travmonkey) 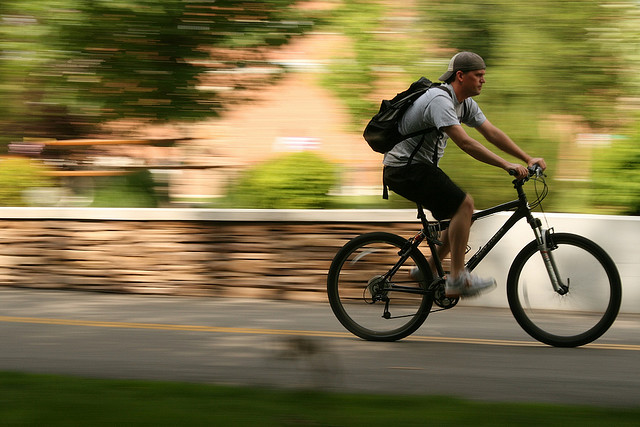 And was really impressed, the picture I found before that one (sadly can't find it again) looking even better, with a really beautiful linear motion blurred background and a crystal clear subject on a bike in the foreground.

Having no idea at all how this could've been produced I looked around and found the site linked in the image source above, however it doesn't say much other than that one has to pan the camera.

Looking a bit around on this site revealed that "second-rear curtain flash" is also used a lot for these kind of images, as per this Q&A. However, in bright daylight I don't think the flash method will have much effect, but panning the camera seems like a really hard task to me.

I have yet to try it out but given the picture above, wouldn't one have to move the camera at the exact same speed as the bike is going? Or is there post-editing in play too? What I specifically don't understand is how there can be no blur on the biker at all, not even the tiniest bit.

If someone could enlighten me on how to do shots like this and what tips and tricks there are to make it easier and better that'd be amazing.

Yes, moving the camera to follow the bicycle is called Panning. It's easy, we can do that, it does not have to exactly precise. Any attempt greatly reduces the subject motion. It is a good way to try to freeze the motion of something like this passing bicycle.

It was not flash, because the near side of the subject is dark, darker than his front for example (no evidence of flash, no brighter spot on the near ground). Also, unless the camera were moving following the bike, the background would not be moving or very blurred. And the flash would try to freeze the background too.

My notion is that we see rear curtain very much more used at night, like seeing a passing car, and its taillights lead a long exposure light trail, but the flash freezes the car at the end of the exposure.

All you have to do is to turn your body and camera to follow the bicycle motion (holding it at same spot in your viewfinder) and then click your shutter, while following the bicycle. With a shutter speed a little slow (dunno, guessing maybe 1/30 sec), the motion will blur the background (moving as you turn the camera), but the camera is following the bicycle rendering it relatively motionless, and it would stay relatively sharp. It should work pretty well the first time you try it.

Not the answer you're looking for? Browse other questions tagged lighting blur motion-blur or ask your own question.

17
What equipment and settings do I use for panning shots of moving objects?
3
Where can I practice panning shots?
2
How to motion-blur the background while keeping the subject well exposed and in focus?
0
How to take a moving object(far distance) in outdoor low light situation?

39
Focus problem vs. motion blur vs. camera shake - how to tell the difference?
10
How to create motion blur in daylight?
2
How to motion-blur the background while keeping the subject well exposed and in focus?
0
Where can I find light bars?
6
How to make a gradient background
2
Why is there motion blur at the edge of photos?
2
How to have motion blur only behind the subject?
12
multi-strobe-like motion blur outdoors?