Is there any value in full 'beginner's kit bundles'?

If I were buying my first "serious" camera, is there any value in buying a "full beginner's kit" like the below or should I just buy the camera with the kit lens? The full kit costs about $100 (or 10%) more than the camera and kit lens.

Overview of kit [brand names, other than Canon, obscured] 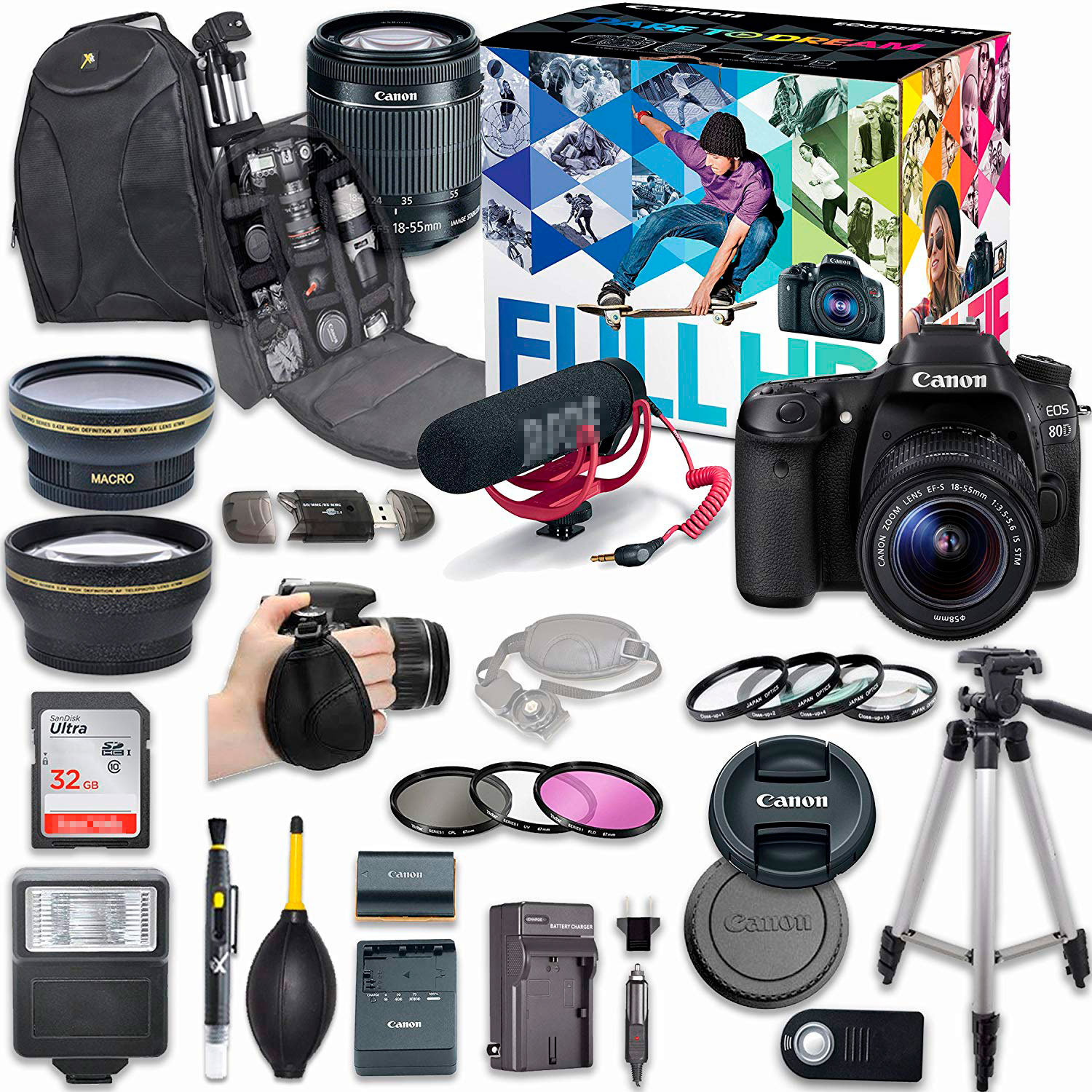 Most of the stuff in those beginner kits is total junk you'll have to replace within a year.

The only thing in that kit that makes it a 'video kit' is the mic; everything else is the same old rubbish you'd get in a 'photography kit', so I think it's fair to cover it here, rather than force the question over to 'video.se'.
The flash, filters, close-up adaptors, wide & telephoto adapters aren't worth attaching to the camera.
The tripod will barely be able to hold the camera's weight, let alone keep it steady.

Alternatively, if you really want to see what you get, I'll ship you all the shi... erm... cra.. err.. stuff I kept from my first kit, so you can see just how bad it really is ;)

A quick tick/cross value judgement on this type of kit [unmarked items are 'take it or leave it' with no real value call either way]. Camera & real accessories would be assumed to be premium quality, of course. 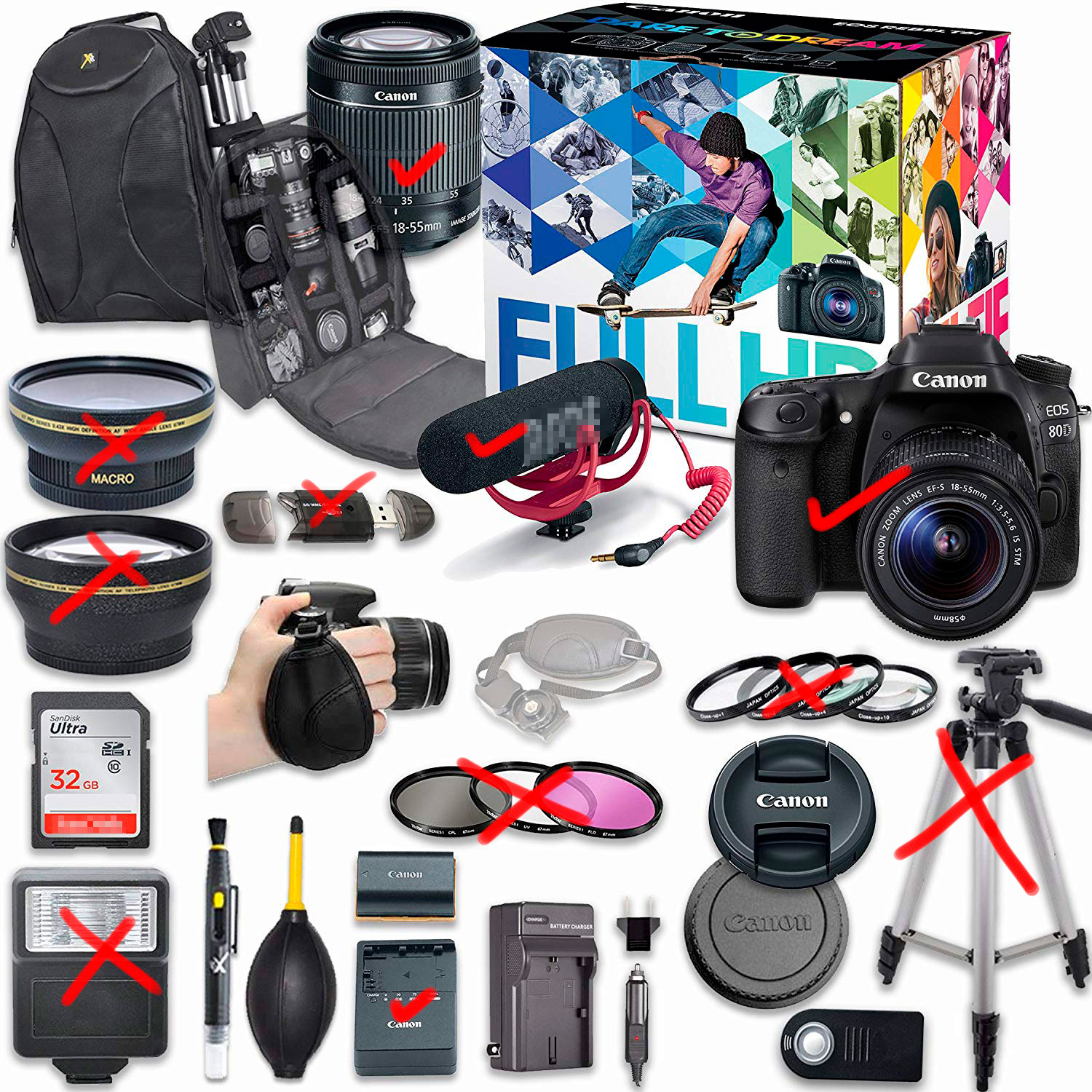 After comments - let me be more specific on some of the items...

I would have posted some example pics but I seem to have buried the lens adaptors so deep I can't find them ;-)

The wide adapter can make a full circle vignette on a crop-frame.
The long adapter has some less-than-delightful colour aberration. Same for the 'quick' magnifying adapters.
The filters add reflection & a general lack of sharpness that as a beginner it takes you a while to figure out what's causing it.
The tripod weighs 300g [under 11oz] & is so flimsy it develops a springy bounce at full height - about 1m. At minimum height it's not wide enough to stay upright with a camera on it, so you need it at about half height to get the balance right.
The flash isn't hot-shoe. It only triggers from another flash, so you have to have it off-camera & use the built-in flash to trigger it. The recharge times can be measured geologically, & the flash will re-trigger whether or not it has fully recharged, so you get "vari-light".

There are two different kind of camera bundles. One kind is a "kit lens" from the manufacturer ­— usually camera body and a 18-55mm or similar zoom lens, occasionally also with a second telephoto zoom. These generally give you a pretty good deal on those budget lenses. Sometimes, it's even cheaper to buy a camera packaged in this form than body-only! (Of course, if you already have lenses, or intend to buy higher-end ones, it's probably not worth the money.)

What you're looking at, though, is the other kind of "kit". These are camera accessory bundles put together by camera stores (or sellers on Amazon), and include things like a cheap memory card, a crappy UV filter, and maybe a serviceable camera case and wobbly tripod.

These are high-margin items which serve to increase the seller's profits and are generally not a good deal at all. These are often also sold with the term "kit", probably in order to confuse people into buying them.

You can tell you're shopping at a skeevy merchant when they insist you need a kit like this. In every case I can imagine, though, you're better off skipping it. Even if there are one or two items everyone needs (like a memory card), and some things which are nice to have (like the "rocket" blower), you're not saving enough to make it worth giving up the ability to select individual items yourself.

This answer updated from an earlier one from almost a decade ago. Adding in microphones is new, but basically, the more things change, the more they stay the same...

A couple of decent batteries (even my local high-end camera shop recommended non-Canon batteries), maybe a spare charger and some memory cards can be had on-line for significantly less than the "kit" cost and will serve you better.

Quality SD cards are more expensive than cheap ones, but really aren't all that expensive unless you're tied to buying at your local yellow & blue big-box store.

Not the answer you're looking for? Browse other questions tagged equipment-recommendation photography-basics or ask your own question.

9
Does it make sense getting any of these "extra" lens packages?
8
Did I get ripped off by purchasing a "deluxe bundle" with my camera?
1
How do I evaluate photo accessories bundled with a camera?