Is it actually a the, or are there multiple such functions? Is it an absolute fact of nature or simply an agreed-on standard? If the later, who says?

How is it used in color spaces used in digital photography and image manipulation?

How does it affect the values (lux and candelas) used in exposure metering? *

* This is where I first came across the term: it seems that these units are by definition adjusted by the function. I assume that this means that the standard EV levels are inherently graduated for human perception regardless of the color of light, which makes perfect sense (and raises the idea that aliens, or even, y'know, super-intelligent-mouse photographers) would need different exposure meters.

There are several -- in fact, if you want to get down to it, there really millions -- every person's spectral response is probably (minutely) different from every other, and an individual's spectral response varies over time as well (though it's pretty standard to ignore things like spectral response when the eye isn't adapted to the current lighting).

Nonetheless, there's a CIE standard for the "average" person's response. Actually, there have been a couple of standards -- the version produced in 1931 was officially current for decades (up until 1988). It was disliked almost from the beginning (literally -- even the chairman of the committee that produced it said rather nasty things about it).

It was replaced in 1988 with a newer one that shows more response to blue light. The official story is that this is to take the extended spectral response of younger people into account. The unofficial by widely accepted story is that the original was based largely on measurements made under extremely warm incandescent light, which under-rated nearly everybody's blue response, for the simple reason that the light being used contained almost no blue to start with. In reality, most people do lose some color acuity with age. Cataracts can cause severe loss of color vision, but otherwise it's generally fairly minor.

In any case, the standard defines a curve that's supposed to roughly characterize average human spectral response. It's open to argument that the current standard still doesn't do that as well as you might like, but at least it's not quite as obviously problematic as the 1931 standard. OTOH, given the three colors of sensors in the eye, what you have in reality is a curve with five peaks (three primary peaks for the wavelengths of the "filters" on the individual cones, plus two secondary peaks where they overlap) -- and that structure doesn't show up in the CIE standard at all. Instead, you could almost mistake it for the standard bell curve: 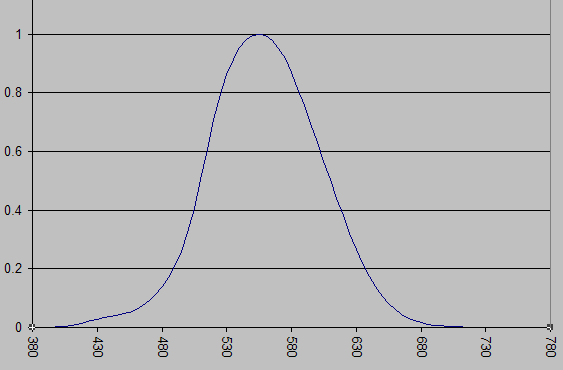 As for how it's used:

In color spaces, it's taken into account to some degree -- the limits it defines correspond reasonably closely to the limits defined for things like the normal CIE xyz color space, which is used as the basis for nearly all other color spaces.

It's not really taken into much account in exposure metering -- it's related to spectral response, and exposure metering is (normally) "color blind", accounting only for intensity, not color. About the only thing they do to take it into account at all is specify a color temperature of the light you should use to test/calibrate a meter.

As noted above, since it's basically the spectral response of the eye, there are millions (if not billions) of separate functions involved -- but for the most part, it comes down to a lot of really minor variations on a few main themes: basically normal color vision, and the various forms of impaired color vision (protanopia, deuteranopia, etc.)

Not the answer you're looking for? Browse other questions tagged metering color human-vision-system color-spaces or ask your own question.

20
What is the function of the tint slider in Lightroom?
7
What is the native color gamut of a modern digital sensor?
8
What is the difference between HSV and CIE-Lab color space?
17
Why don't color spaces use up the entire color spectrum?
3
What is the "right" displayed color?
4
If I take a photo of a light outside the visible spectrum, what will it look like after print?
3
How exactly does "lightness" function with regards to the chromaticity diagram?
2
Can an RGB channel be shifted to increase color gamut into the violet range?