Are burned out highlights bad?

I have read many answers and articles saying that I should avoid blown out highlights, but is it really a bad thing? Why should I avoid it?

It's only a bad thing if the detail in the blown areas is important to you.

There are situations where at least small areas of blown highlights are impossible or impractical to avoid: when specular highlights from reflective surfaces, car headlights, the sun are included in the frame.

There are also times when you may choose, for artistic reasons, to make use of, or even exaggerate, blown highlights. For example high key or backlit portraits

Similarly, while it would certainly be said that camera shake or blur is "bad", it can be used for artistic effect (see ICM - "Intentional Camera Movement")

So to say that they are "bad"? Well that really depends on what the photographer wants.

If you do have blown highlights, your options may be limited as to what you can adjust later.

For example, here is an example of a JPG shot I took about 10 years ago before I started shooting raw. 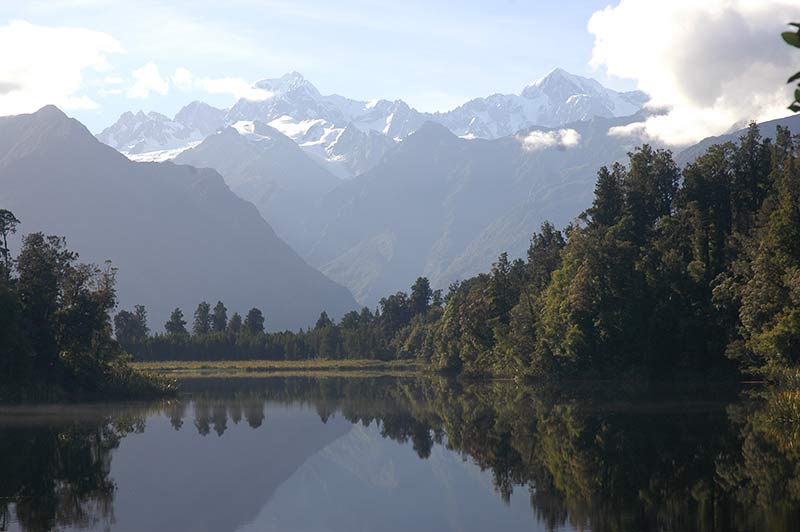 If I apply a graduated neutral density filter to the sky, I can get more detail and contrast in the mountains and sky, but the clouds are all blown. In the cloud to the left, every pixel has a value of 255,255,255. So whatever I do, I'm going to end up with the clouds being a solid blob of grey or white, with no detail. 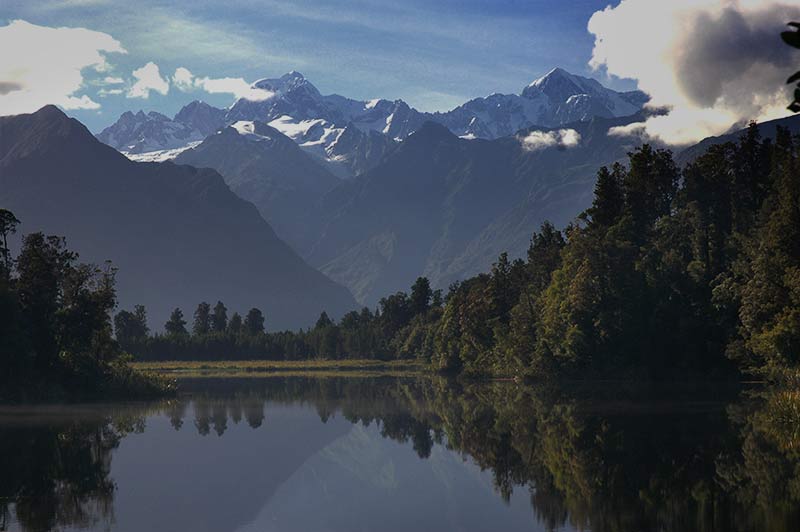 As far as I know, the following answer is only true for digital photography, as...

"Black and white films and C-41 color films (color negative) can capture a great tonal range and are more tolerant of over-exposure, allowing them to resolve detail even when blown out (it may take some post-pro coaxing, but at least some detail is there). E-6 (color slides / transparencies) have a lesser range and are far less tolerant of overexposure."

Burned out highlights are far less recoverable than shady areas. This is by design: Photo diodes of a sensor can only capture so much photons before they have to report that they are "full". E.g. in 8 bit (values from 0 to 255), there is no distinction between 255 as in overflowingly full and 255 as in only just full. Underexposed areas, however, often have values above 0, so they can be recovered (with increased noise as a trade-off).

Take, for example, an overexposed (by +2 EV) face - it would be hard to impossible even with RAW to recover the face, and so it will stay white and without any texture. In comparison, take a -2 EV underexposed face: Sure, there will be some amplification noise, but usually, this will work out far better. 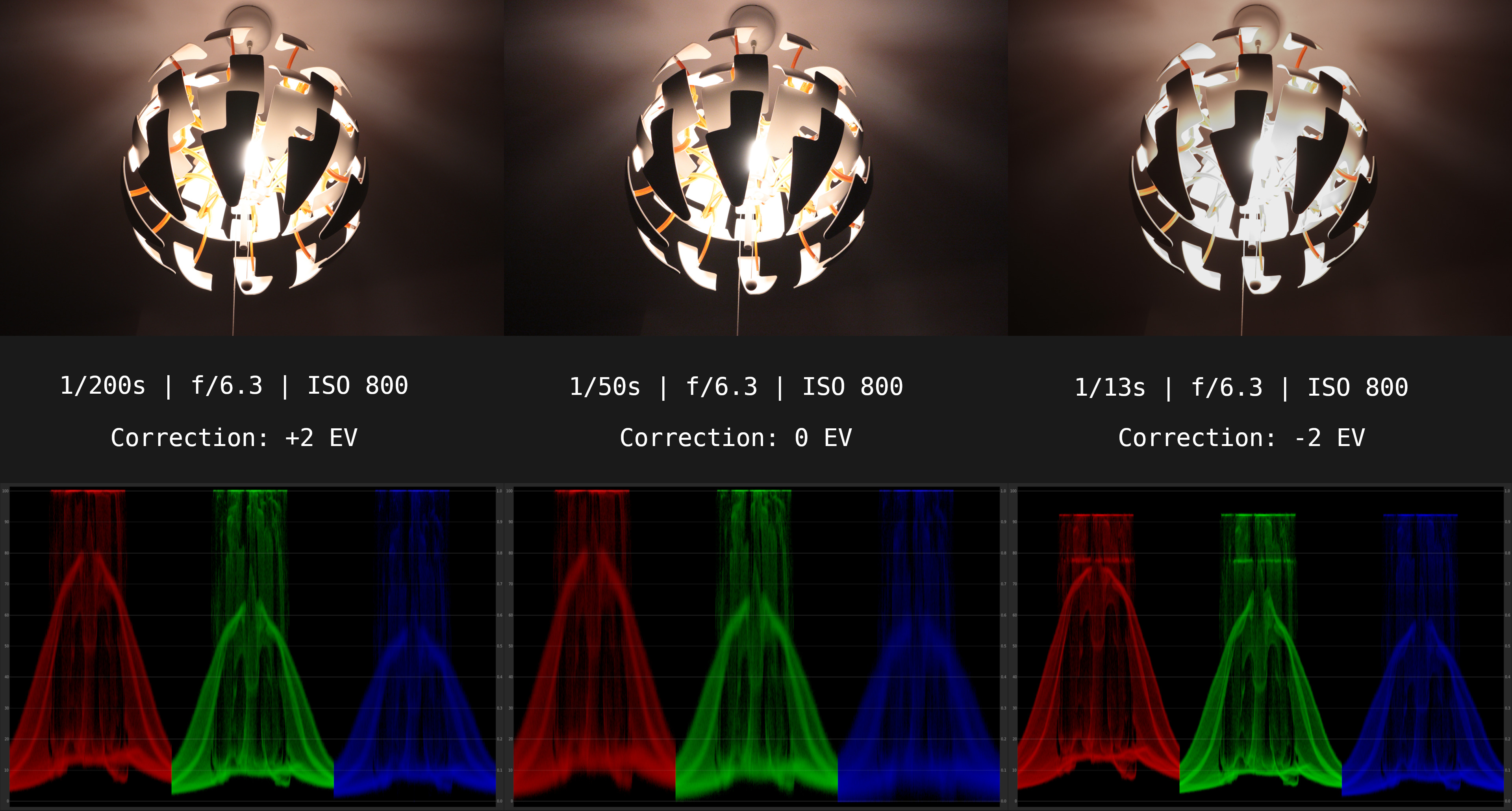 Look at the right picture's orange elements close to the source light - they were blown out beyond recovery. Sample images taken in an AEB-burst (± 2 EV) with an EOS M6. All pictures started out as RAWs, were corrected +2 EV / 0 EV / -2 EV in Digital Photo Professional (only CA were corrected, NR was set to 0, WB was set manual, no lighting optimisation), then exported as 16bit TIFs. Lower section shows the RGB parade waveform from After Effects.

You can, of course, use overexposed images as you like Link to random overexposed picture I found - there is no hard rule as to why not to do it (the only hard rule in photography is that there are no hard rules ;-) ). Overexposure simply is harder to fix (beyond a certain limit) and thus most people try to avoid it.

If you care for details in these areas, then overexposure is bad. If you have any good reason to not care for them (e.g. more interesting things in darker areas that need to be enhanced, or artistical reasons), then not even the most technical photographer can object to it.

Also note that, as you can see in the picture above, there is no sense in "properly exposing" source lights. The above picture shows (ca.) the same framing as the earlier pictures, only now, I tried not to overexpose the source light (a 11W Philips LED, as far as I can remember). Source lights are much brighter than your scene, as your subjects will usually not have an albedo of 1 and you might use filters, light formers and/or other things in front of your source light(s). Since my white lamp has no albedo of 1, it appears (almost) black in this image.

One last thing: Do not be confused by Exposure To The Right. It has nothing to do with blowing out highlights - it simply means to overexpose everything without blowing out anything.

Blown out highlights are not necessarily a bad thing, and often don’t need to be avoided. There are two types of blown out highlights; areas where the human eye can see all the details, but that get too bright too see any detail in the picture, and areas that are so bright that the human eye cannot see any detail in them either.

The first type can be called a ‘mistake’, because it is caused by limitations of the photography equipment or by the settings chosen by the photographer. What is seen in the picture is not how it could have been seen when the picture was taken. Off course this type of ‘mistake’ can very well be used for creative purposes and give an amazing photograph, like any photography ‘mistake’. It can also be a big problem. When the pixels are burned, there is no way to get the lost information back later.

The other type of blown out highlight is the real life blown out highlight. It is also blown out for our eyes, and a more common name for it is ‘bright light’. Did you ever see what is inside the headlight of a car when it is on at night? From a distance you will only see white, everywhere the brightest of white, no details at all. Having this blown out in your picture in not a mistake at all, it is exactly how the human eye sees it too. Having it anything else than completely blown out would be a mistake, and would cause the picture to look weird and fake.

Bright lights are everywhere in real life. Search for photo’s with “city at night” on Google, you will find hundreds of amazing pictures, and I could not find even one of them that was not filled with blown out highlights.

Photos on a sunny beach? Chances are almost all of them have blown out highlights. The sun sparkling in the water, tiny shiny pieces of sand or just a shiny oiled body. And what about stars? Who wants to see some gray dots on a black background, they should be burned out all the way.

It is not our job as a photographer to avoid burned out highlights, it is our job to determine if it is also blown out in real life, an ordinary bright light or sparkle, and then decide whether we want it in our photograph or not.

Not the answer you're looking for? Browse other questions tagged exposure composition highlights highlight-recovery or ask your own question.

26
What is ETTR (Expose To The Right)?
9
How can I avoid circular banding artifacts in clear skies when de-noising?