How can I get the horizon and the lighthouse both level in my photo?

I took the following photo on on a recent holiday in southern Italy: 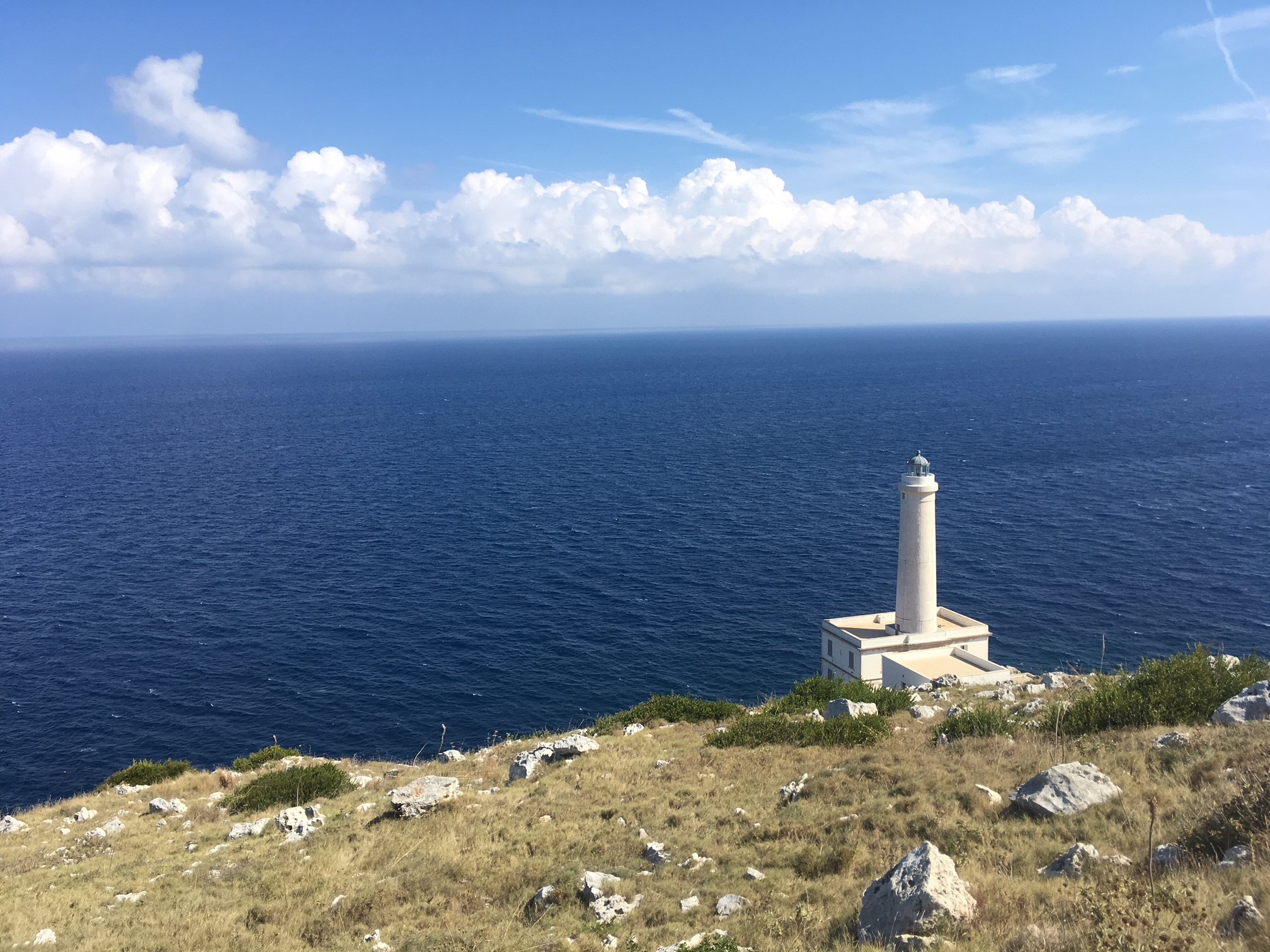 I was pleased with the picture, but I could see that the horizon wasn't level, so I adjusted it (a simple rotation). The result was this: 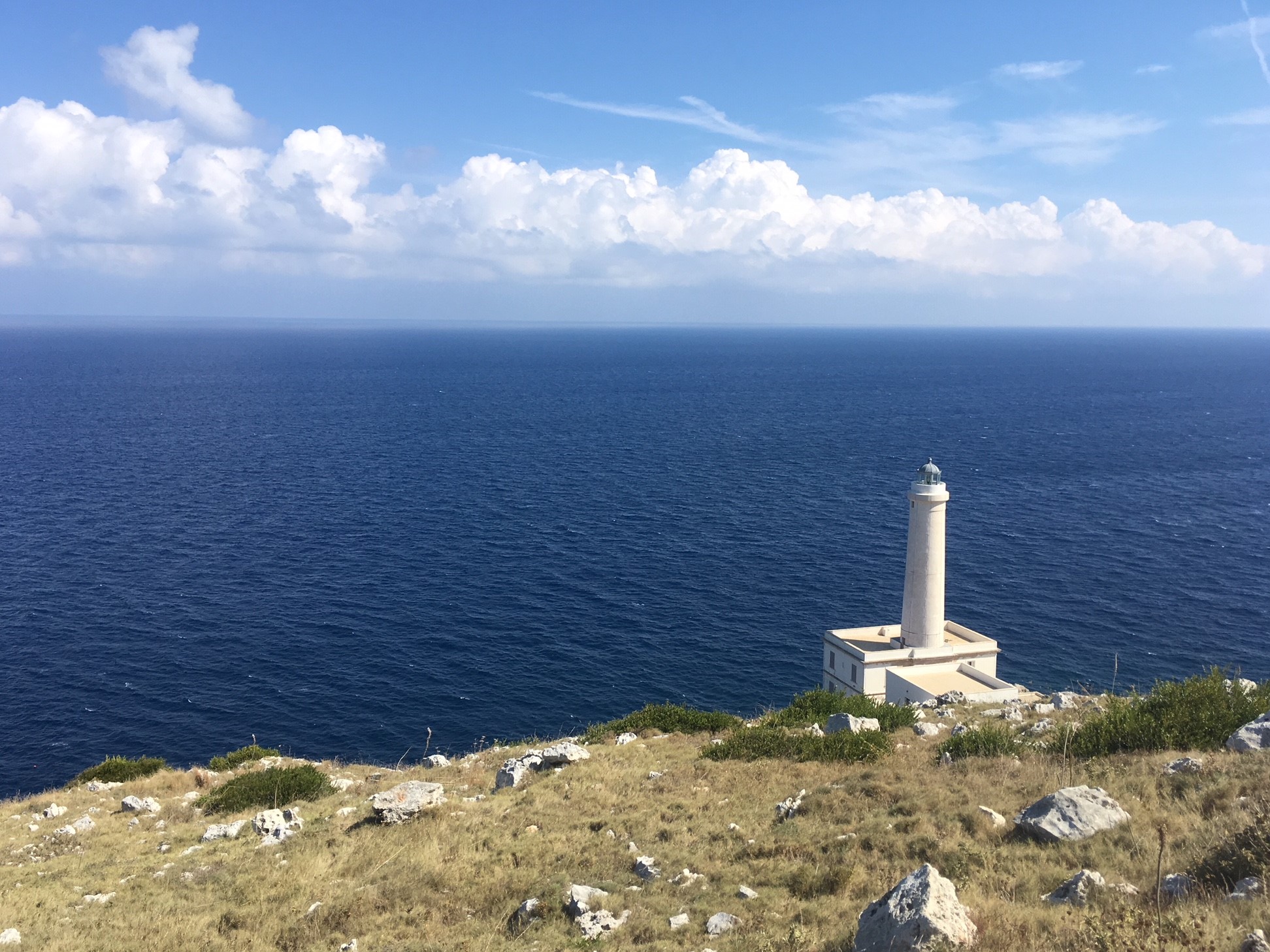 Now, my horizon looks level, but my lighthouse isn't!

Note that there is some land very faintly visible in the left half of the photo (which would be Albania, I think), but I don't think that affects the horizon. The original photo with a horizontal line on it looks like this: 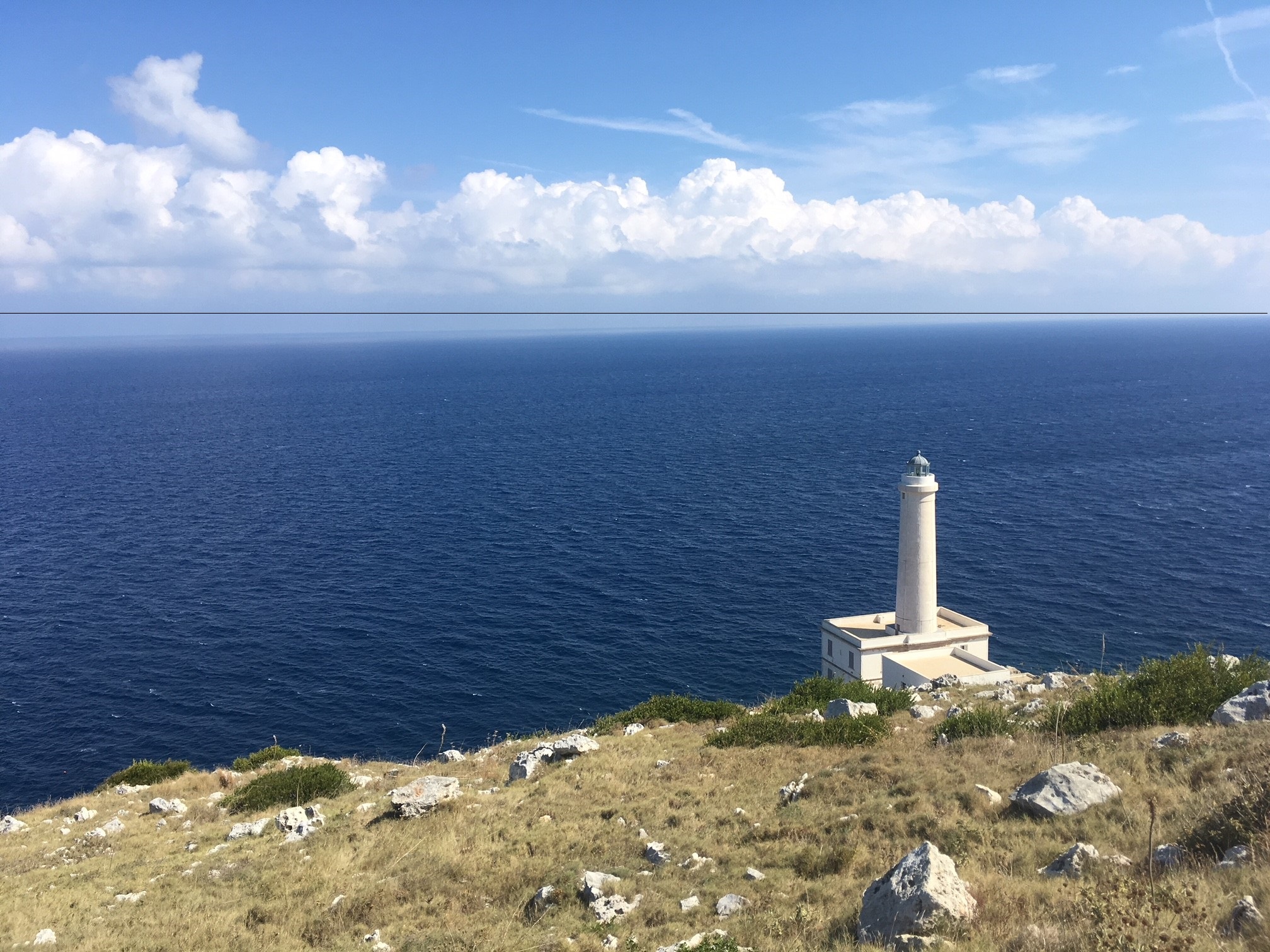 What's going on here!?? How do I make the photo look 'right'?

For those that are interested, the photo was taken here

Because you are shooting with the camera pointing down, you have convergent verticals. This can be fixed with the perspective tool in your image editor: 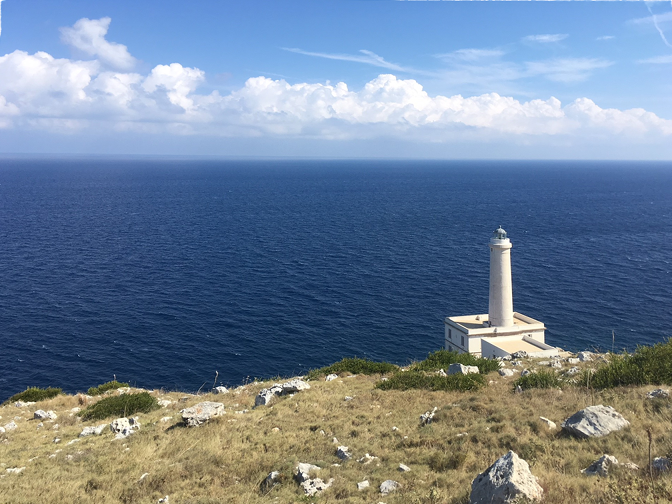 Ever notice when you try to take a photo of a building from the ground, when you aim up to get the entire building into frame, the building appears to taper towards the top? That happens because the camera is tilted vertically upwards.

In your image, the camera is aimed slightly down, so vertical lines will converge at a point far below the image.

So, to get the horizon level and the lighthouse vertical (perpendicular to the ground) in the same image, you have to hold the camera level. The easiest way to do that, especially in this scene, is to aim the center of the camera at the horizon.

Unfortunately, that might not be the most desirable composition. Crop the result to suit your desired framing.

Note that this is exactly what perspective control lenses (also called tilt-shift lenses) do — rather than cropping in post, a PC lens aimed at the horizon, with an off-center shift "selects" the part of the scene in view, while keeping the perspective orthogonal.

As others have noted, lines will converge or diverge depending on the angle at which you hold your camera. To fix this in images that have already been captured:

At the scene, you can avoid the problem:

In Lightroom you can use the Transform tool to correct horizontal and vertical lines. https://helpx.adobe.com/lightroom/help/guided-upright-perspective-correction.html

I don't know what the horizon looks like to the naked eye but what's the intent of the photo? As a pleasant landscape, to my eyes, the original looks best. The lighthouse appears vertical with its taper intact and the horizon dips as it would if you were looking down at a horizontal line vanishing behind the observer (sit in a chair near the center of a room and look down at the wall/floor intersection and up at the wall/ceiling intersection.) The cloud base appears approximately horizontal, diverging from the horizon, appearing closer on the left adding depth and motion, especially with the shoreline beneath.

The second photo rotates the right side (it's round, so there's only one side?) of the lighthouse tower vertical, making the entire photo seem tilted even though the horizon is level. The lighthouse wall taper is unnaturally enhanced by the left side appearing tilted to the right, the vertical shadow no longer vertical and the base leaning right. It still maintains well the illusion of depth.

The corrected photo is more orthogonal but emphasizes the foreground and loses quite a bit of depth in all three axes. The lighthouse appears to tilt left and the shoreline on the left appears closer or dropping right.

I once took a great photo of a grove of white birch trunks on the side of a steep golden sunlit grassy hill. With the exception of one tree, all of them were growing normally, straight up with the loner growing slightly to the right but almost perpendicular to the ground. Tilting my camera right so the loner was vertical and the ground approximately horizontal, the resulting image showed a grove of trees all growing tilted oddly left, the one now vertical tree setting the scene. Unless the loner was covered in the photo, it was almost impossible to "see" the artificial tilt that created the photo. Viewers focused on the one straight white tree trunk among the rest, not the slightly sloping ground line.

The same scene with the mass of trees shown growing as they really were was colorful but ordinary.

We tend to use vertical lines as references more often than horizontal lines. In your photo, the white lighthouse would likely be picked up first, then the horizon, then cloud base. If the lighthouse tower looks natural, the rest should follow. In a scene where horizontal elements dominate ( straight on street view of a house on level ground, e.g.) they are more important to have level.

Sometimes it's easier to do in post with "PhotoShop" or other similar software.

Then, I level the head and lock it in one direction and tilt-up in the orthogonal direction to place the horizon in the best vertical position of "thirds" or whatever floats my boat, um or ship, for the exposure.

It's a quick two-step procedure.

The horizon does not need to be straight, because you are not looking straight at the horizon. You're looking at the lighthouse, and the viewer's eye is drawn to the lighthouse, especially because of the angle of the horizon. Look at the edge of a table, it is straight when you look at it perpendicularly, but if you are looking at a corner it will be at an angle. The "corrected" version, where everything is orthogonal, does not draw your eye nearly as well to the lighthouse, it draws your eye to the center of the photo, which is not a very interesting place to look.

Not the answer you're looking for? Browse other questions tagged perspective image-alignment or ask your own question.

21
How can I stitch a panorama correctly if I moved the camera along the horizontal axis?
15
How can I overlay two images exactly by scaling one of them in gimp?
4
How can I find the matrix that GIMP used?
8
How can I align two panoramic images?
6
How to correct perspective and geometric distortion?
10
How was the very two-dimensional perspective effect done in this National Geographic lake photo?
1
How can I remove the grid lines during transformation in GIMP?
3
How to take 2 photos of the same scene and keep them registered
4
How to get straight vertical lines when photographing from above?