To keep the conversation simple, please focus only on native lens design for the mount.

So with the recent Nikon mirrorless announcement, Nikon has been touting the bigger mount. I am no expert in this area so I was wondering if someone would help me understand this topic.

Nikon indicated that the bigger mount is there so that lens can be made faster. Sony disagree. Based on products in the past, such as the current L series canon 50mm 1.2, seem like Nikon statement is false.

So that's both side of the argument. I don't have enough understanding in this matter to figure out who is right, and who is bullshitting.

Would someone with enough understanding explain who is wrong and who is right, and if there is/area actual benefit to having a larger mount when it comes to getting more lights to the sensor via faster lens?

First: Sony doesn't necessarily disagree with Nikon's claim. It's just that Sony designed their 'E' mount with a throat diameter of 46.1 millimeters at a time when it appeared it would be an APS-C only mount for the NEX series of compact mirrorless ILCs.

Sony later made the decision to move into full frame territory using the all-electronic 'E' mount, rather than either using the existing mechanical 'A' mount¹ that dated all the way back to Minolta film cameras or creating yet another new mount for their FF mirrorless cameras. The 46.1 mm throat diameter of the 'E' mount is just large enough to accommodate the 43.27 mm diagonal of a 36x24 mm FF sensor.

Second: The all-electronic Canon EOS 'EF' mount, introduced in 1987, has a throat diameter of 54 mm. The existence of a 50mm f/1.2 lens in the Canon EF mount with its 54mm throat diameter does nothing to disprove Nikon's claim that their new 55 mm wide 'Z' mount allows better lens design than their previous 'F' mount, which had a narrow throat diameter of only 44 mm.

Basically, since 1987 when Canon introduced the 'EF' mount with a 44 mm registration distance and a 54mm throat diameter, Nikon has been technically limited from matching some of Canon's lens designs due to their own 46.5 mm registration distance and narrower 44 mm throat diameter.² Similarly, with the introduction of the Sony 'E' mount in 2010 and the application of it to FF cameras with the introduction of the Sony α7 series of cameras in late 2013, Nikon 'F' cameras (and Canon EOS cameras as well) were at a disadvantage with regard to designing very wide angle, very wide aperture lenses that can take advantages of the shorter registration distance to both simplify design, reduce size/weight, and match or improve lens performance in a smaller package.

For shorter focal length lenses with wider apertures, a larger throat diameter allows larger exit pupils. A shorter registration distance allows shorter focal lengths without needing to resort to a complex retrofocus design to make lenses with focal lengths shorter than the registration distance. Both of these factors combined mean that larger rear lens elements can be positioned closer to the imaging sensor. This allows for lens designs not possible using narrower throat diameters placed at greater distances from the camera's image plane.

With an 85mm focal length lens, the difference between 16mm and 46.5mm registration distance is not really a factor at all because 85mm is considerably longer than even the 46.5mm registration distance of the Nikon 'F' mount. When one looks, for example, at 85mm lenses for the Sony E-mount and compares them to 85mm lenses with the same maximum aperture for the Canon EF mount or Nikon F mount, it's pretty easy to see that the lenses are about 30 millimeters longer for the 'E' mount to make up for the roughly 30 millimeters shorter mounting flange. The rear elements of the 85mm lenses for the Sony 'E' mount are about 30mm more recessed into the lens.

The wider throat diameter is a factor, because it allows light striking the edge of the imaging sensor to strike it at a more perpendicular angle than a narrower throat diameter would. This increases the amount of light falling on each photosite in the same way that each square meter of ground on the surface of the Earth receives more light/energy from the sun when it is high overhead than when it is low on the horizon. In fact, it would be even more analogous to how much sunlight, based on the angle of the sun, would strike a one meter square on the Earth's surface with a solid 1-2 meter high fence around it, since the pixel wells on typical ILC sensors have depth that usually exceeds their own width.

² The previous Canon 'FL' and 'FD' mounts had 48 mm throat diameters that were 4 mm wider and sat 4 mm closer to the film than the Nikon 'F' mount, giving them a slight advantage when designing very large aperture lenses in medium focal length ranges. That's one reason Nikon's 58mm prime could be designed differently than their 50mm primes. The 3.5mm difference between 46.5mm and 50mm is not quite enough room to fit all of the lens elements needed for a higher quality yet simply designed 50mm lens.

Using your thumb and forefinger on each hand, make a finger frame, and hold it out at arms length.

Now imagine that your entire field of view is limited by the bounds of this finger frame. Anything outside of the frame is not visible to you.

If you wanted to see a larger (wider) field of view, you have two options:

Nikon did both with its Z-mount system. But really, it had no choice — Nikon had to do both:

Nikon indicated that the bigger mount is there so that lens can be made faster. Sony disagree.

No, Sony doesn't disagree. Yes, Sony's E-mount throat diameter of 46.1 mm is among the smallest of MILC lens mount throats. But that's because it was initially designed for APS-C -sized sensors, with a possible eye towards full-frame sensors. They simply didn't design for benefits of large throat diameters that might ease lens design in the future, because they were focused on the benefits of small camera bodies in 2010.

Based on products in the past, such as the current L-series Canon 50mm 1.2, seem like Nikon statement is false.

Nikon's Z-mount introduction accompanied by an unimpressive lens lineup didn't disprove the benefits of a large throat diameter; it merely shows that, upon introduction of the mount and initial lens lineup, they didn't take full advantage of the possibilities their new mount opened up to them.

The primary benefit of a large throat diameter on a short-flange distance camera body is not in designing an 85 mm ƒ/1.0 lens. The main benefit will be when (if) they want to introduce a wide angle fast lens, perhaps a 14 mm ƒ/1.4. Wide angle lenses in particular have been limited on DSLR bodies due to the need to use retrofocal optics to achieve the short focal length and wide angle of view. See also:

Nikon's announced Z-mount Noct 58 mm ƒ/0.95, is an example of what they can do with the wide mount that they couldn't do with the F-mount. Nikon's previous fast champion, the 58 mm ƒ/1.2 Noct-Nikkor, had a rear element that was pushed to the very edge of its bayonet boundary. The rear glass even had a groove cut into a portion of its circumference, to accommodate the aperture linkage lever: 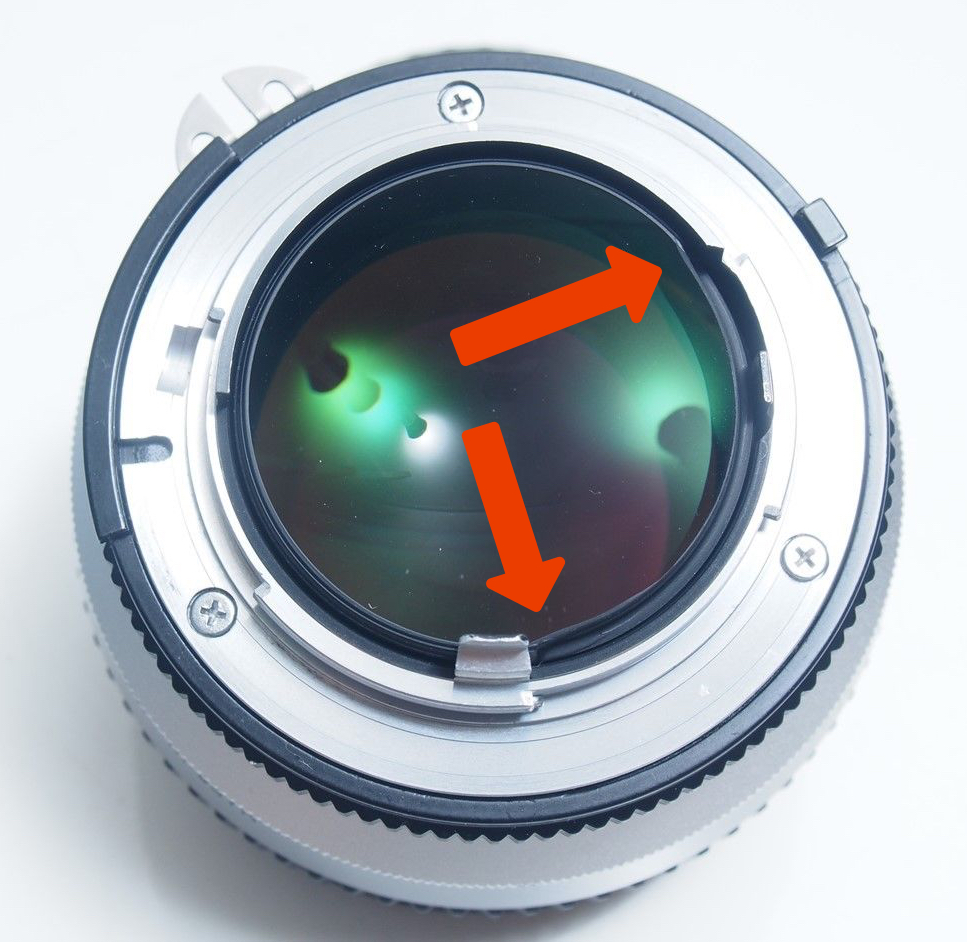 Had the F-mount throat been 55 mm rather than 45 mm, it's not likely they would have produced a 58 mm lens substantially faster than the ƒ/1.2 at the time. But they certainly would have had the room to fit both the rear element and the aperture linkage lever without having to cram them together.

Given that (for one example) Canon built a 50 mm f/0.95 lens for a variant of the M39 mount, which had 39 mm throat, and that remains one of the fastest conventional1 lenses every built for a 35mm camera, I doubt the throat diameter is particularly relevant to building lenses that are simply extremely fast.

That leaves us looking for other reasons to do this. The obvious one would be to avoid a problem some have seen when mounting older lenses (especially wide-angle lenses) to mirrorless bodies. With a (non-retrofocal) wide-angle lens, the light can be traveling at a fairly steep angle of incidence when it reaches edges or (especially) corners of the sensor.

A wider throat makes room for a lens that doesn't need to project at such a steep angle to cover the corners of the sensor.

When the light is traveling at a steep angle, you typically expect to see more vignetting, and in extreme cases you can get a rather strange rainbow effect toward the corners.

The microlens in front of a sensor well isn't corrected for things like chromatic aberration. Normally there's no need or point, since all the light sensed by a single sensor well is treated as having a single color anyway. With the light at a steep angle of incidence, however, you can run into a problem: only a fairly narrow range of colors of light are refracted correctly to reach the sensor well at all.

With a wider throat, the lens can be designed so the light is traveling (closer to) perpendicular to the sensor as it leaves the rear of the lens, preventing this problem from occurring (or at least reducing it the point of insignificance).

Not the answer you're looking for? Browse other questions tagged lens lens-mount lens-design or ask your own question.

69
Why are wide-angle lenses so much more expensive?
29
Why do wide angle prime lenses have relatively small apertures?

5
How does the Sony 135 F2.8 [T4.5] STF twin aperture lens design work?
4
Lens f-number and speed on adapted lenses
9
Do cine lenses have any significant advantages for still photography?
17
In what way does the lens mount limit the maximum possible aperture of a lens?
1
What is this lever for on the lens mount? (F-mount, not aperture lever)
4
Is there an adapter for Fuji X mount cameras for canon ef-s lenses that allow autofocus and metering?