Is a reflector a viable alternative for a fill-light in portraiture photography?

I'm in the process of creating, and refining, a highly portable portraiture "studio" set-up? I'm looking to lighten my load by using a portable reflector, instead of using a second fill-flash and modifier. I wondering how effective a reflector is? And what size and shape is optimal?

Reflectors are of course used, and can be adequate, and can reduce the main light shadows far better than doing nothing. However, they have to reflect the main light (a flash or the sun, etc), and so have limits of the angle from which the reflector can be placed, and how much they will reflect. Reflectors are sort of placed wherever they have to be, and they do what ever they do. But reflectors can be a good learning experience, in the same way kids in elementary school not being allowed to use a calculator is a good math learning experience. :)

Two lights, just placed either side of camera, is NOT a main and fill situation at all. That is just two lights, and two sets of shadows.

The preferable mainstream fill light for studio portraits is a flat frontal light, from near the camera lens position (often directly above the camera), specifically to reduce the exact main light shadows that the lens sees, without creating an additional set of shadows itself (speaking of shadows on the subjects face. Then the background shadows are mostly hidden directly behind the subject).

The power of that fill light is controlled to determine the desired lighting ratio. Using another flash slave for this makes all that be easy (also using a light meter to set up the power levels makes it be extremely easy and repeatable). Flashes can be placed anywhere you want them, and can be set to the power you want, for full control.

Reflectors are as effective as their coating, size, and the light source allow - for example, they are virtually useless in complete darkness, but quite good in sunny conditions.

Some reflectors offer multiple coatings in one set, e.g. black, white, gold, silver, and often a diffusor as a frame to hold the coated cover. I usually go for white, the diffusor, or gold, but that of course depends on the shot at hand. They are relatively cheap and come in all sizes, so to try things out, you can go for them, as the are not too bad.

As to "what size and shape is optimal?":

As a rule of thumb: the bigger, the better. The biggest sensible size of course depends on environmental factors. E.g. if you do a lot of hiking, you will probably use a smaller reflector, as you will most likely encounter winds in the mountains. If you have 1-2 assistants, I would go for the biggest reflector I can afford. This of course ignores situations like reflecting only on a certain spot (e.g. the face), which will most likely be easier with a smaller reflector.

The form will depend on what you are trying to achieve. If you want to enhance larger areas, then personally, I would go for rectangular ones. If you need something like a spot, then round ones will get the job done.

Note that there are other forms, as well, like triangles: 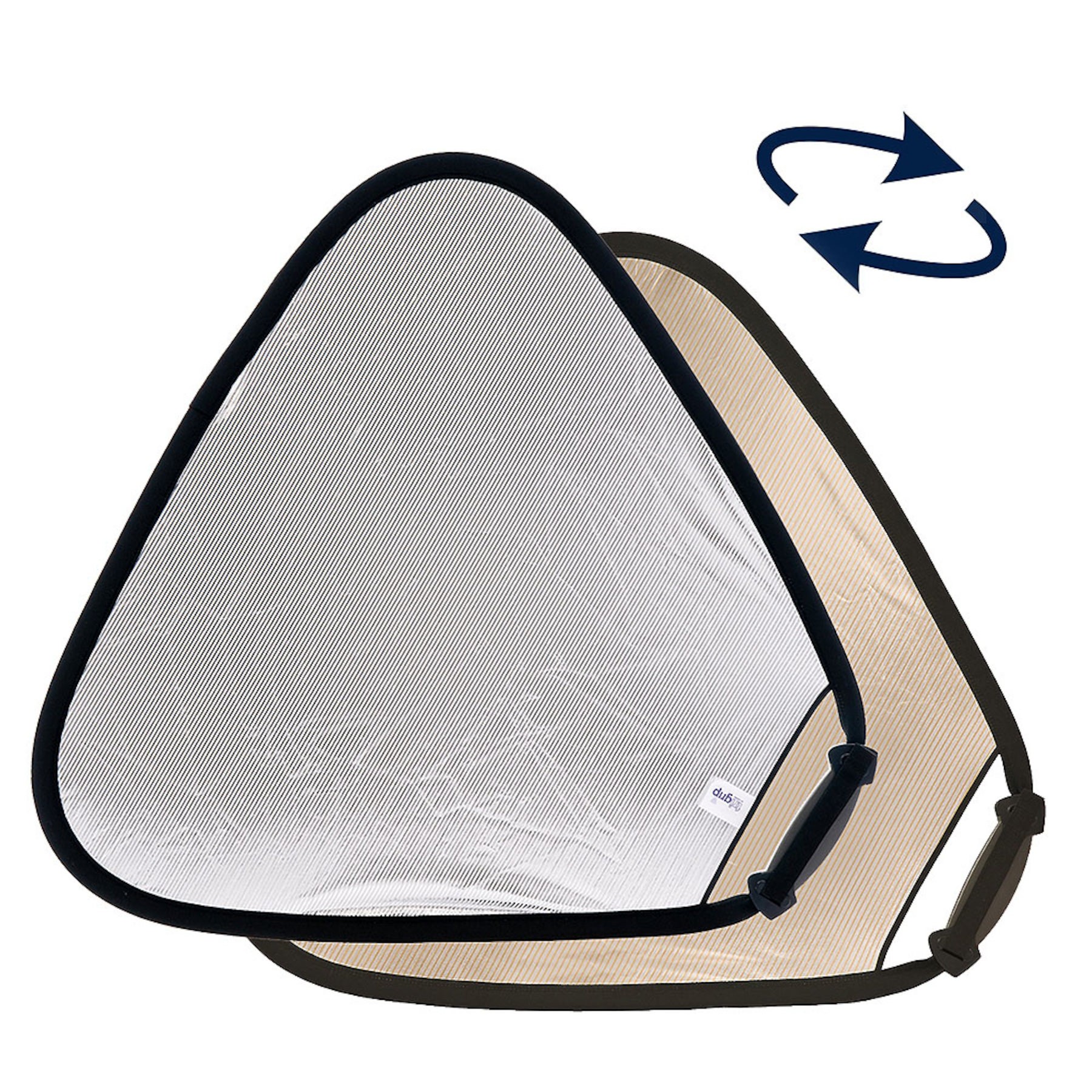 ...of which Manfrotto's marketing department says:

Replacing the need for a regular shaped reflector the TriGrip reflectors utilise a triangular design which provides a much stronger and more stable structure. They also feature a moulded handle with securing strap, allowing accurate positioning with one hand. This means light can be reflected into awkward spots that would've previously required a stand system.

So there are endless varieties of reflectors, all of which (seem to) have their purpose. Personally, I still go with different sizes of cheap, round, 5-in-1 reflectors, because I do not use them too often, because I have other financial priorities at the moment, and because they still work.

Not the answer you're looking for? Browse other questions tagged lighting portrait fill-flash or ask your own question.

1
Is there a good flash for which you can get an AC adapter?
2
Can fill flash be used for both backlit and “frontlit” subjects?
2
How should I set up my studio to take sharp portraits without shadows with two white umbrellas and one silver umbrella?
3
Can using a reflector or external flash soften harsh natural light, or just fill in shadows?
4
Can I compete with outdoor light using a diffused flash?
2
How do I light a large group of people in low light (inside a temple)?
101
What can I do to get models to take my small camera more seriously?
20
Portrait Lighting - why are my fill and rim lights overpowered?
3
When to use diffuser, reflector, fill flash and ND filter?