Why are the Becher typologies considered artistically valuable?

What is so important about pictures of smelting furnaces, grain elevators and water towers ?

From the Bernd and Hilla Becher entry on Wikipedia:

They are best known for their extensive series of photographic images, or typologies¹, of industrial buildings and structures, often organised in grids. As the founders of what has come to be known as the ‘Becher School’ or the ‘Düsseldorf School’ they influenced generations of documentary photographers and artists.

Typology (in urban planning and architecture) is the taxonomic classification of (usually physical) characteristics commonly found in buildings and urban places, according to their association with different categories, such as intensity of development (from natural or rural to highly urban), degrees of formality, and school of thought (for example, modernist or traditional). Individual characteristics form patterns. Patterns relate elements hierarchically across physical scales (from small details to large systems).

The individual photos were elements of these typological grids that was at the heart of both their method and influence.

In addition to being considered the founders of the 'Becher school' a/k/a 'Dusseldorf school' of photography, their work has been associated with the 'New Topographics School'.

The New York Times included this in Hilla's obituary:

The Bechers’ photographic grids influenced the Minimalist and Conceptual art schools as well as artists like Ed Ruscha and Douglas Huebler, who produced images according to systematic rules.

An example of their work: 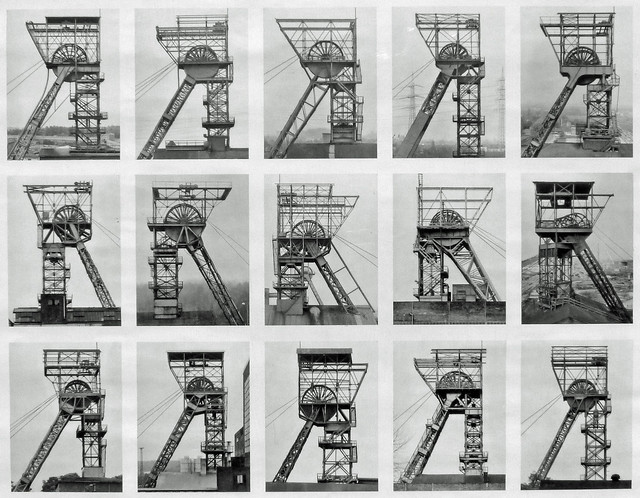 Some of the Bechers' work was also an integral part of of the exhibition that defined the 'New Topographical' movement.

The New Topographics movement was defined by an exhibition ("New Topographics: Photographs of a Man-Altered Landscape") presented in the International Museum of Photography at the George Eastman House, Rochester, New York. It ran from October 1975 to February 1976. It has also been presented, in various scales of completeness, in other venues since that time.

(It) had a ripple effect on the whole medium and genre, not only in the USA, but in Europe too where generations of landscape photographers emulated and are still emulating the spirit and aesthetics of the exhibition. Since 1975 "New Topographics" photographers such as Robert Adams, Lewis Baltz, Bernd and Hilla Becher, Frank Gohlke, Nicholas Nixon, and Stephen Shore have influenced photographic practices regarding landscape around the world.

An article that appeared in The Guardian the week following Hilla Becher's Death in 2015 said of the Bechers' work:

Their style was marked by detachment, precision and similarity – and their method was a reaction to the Soviet-realist style of photography, in which buildings in all their monumentalism reflected the grandeur of the state. More than that, though, they saw their photographs as an attempt – a perhaps impossible one – to invoke the actual presence of the looming towers and spherical tanks.

Because of this, the Bechers’ images straddled the conflicting worlds of documentary and art, making them hugely influential for several generations of artists, not least the many photographers they taught at the Kunstakademie Düsseldorf, including Thomas Ruff, Candida Höfer, Thomas Struth and Andreas Gursky.

A slideshow of more of their work
Sample pages from one of their books
Typologies of Industrial Building (MIT Press) is a comprehensive collection of the Bechers' typologies as they appeared for public display in various art installations.

Not the answer you're looking for? Browse other questions tagged art or ask your own question.

3
What are photographic "typologies"?

32
Does a photographer take pictures or make pictures?
34
How do I choose a title for a photograph?
6
What are the symbolic meanings of the position of hands in images?
21
Why did "pure" photography displace pictoralism so completely?
5
What are some good examples of using ND filter with wide apertures?
2
How can I control figure-to-ground composition when I can't stage the whole scene?
2
Why are mystery and ambiguity valued in art photography when they're not positive in normal life?
37
Why is "The Steerage" hailed "one of the greatest photographs of all time"?
8
Who were the Bauhaus photographers and what was their impact on commercial and artistic photography today?