How to set "release priority" rather than "focus priority" on Canon DSLR?

It appears that Canon cameras default to the equivalent of focus priority. Where is the setting to change to release priority on the Canon EOS 100D and Canon EOS 550D? (If it is even possible.)

I do not want a "work around", such as switching between AF and MF, as suggested by Canon EOS 400D - Shutter Release Lock Override.

Many older and lower-tiered Canon bodies such as the Rebel SL1/100D and T2i/550 do not have user selectable options for AF priority. With default menu items selected:

On advanced Canon bodies it is usually under one of the multiple AF tabs in the main menu. With the 5D mark III and 7D Mark II, for instance:

When the shutter button is pressed all the way in AI Servo the camera fires whether focus has been achieved or not.

For more on the differences between 'One-Shot AF' and 'AI Servo AF', please see: Is there any reason you would use one-shot focus over AI-Servo?

I do not want a "work around", such as switching between AF and MF, as suggested by Canon EOS 400D - Shutter Release Lock Override.

I'm not sure if you consider this falling within the comment above, but there is a way to turn AF 'On' and 'Off' without using the switch on the lens.

With the Rebel SL1/100D (The Rebel T2i/550D should be similar), the 'Exposure Lock' or 'AE Lock' button (the button marked with a six point asterisk that doesn't show up when we type it into the body of an answer here) can be remapped to serve as an 'AF-On' or 'AF-Off' button. It's covered on page 303 of the Canon EOS Rebel SL1/100D Instruction Manual: 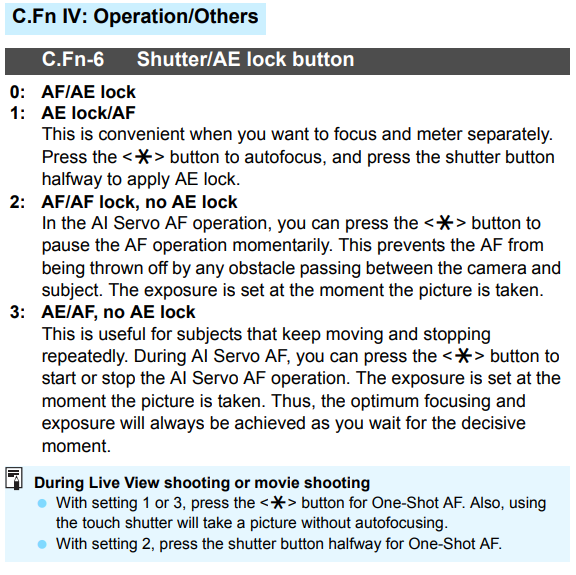 If using [option 1: AE Lock/AF] the shutter button half press only performs AE lock and the 'AE Lock' button on the back of the camera turns AF 'On'. Releasing the 'AE Lock' button turns AF 'Off'. When AF is 'Off', the shutter should fire without the camera confirming AF. This allows 'shutter release priority' in 'One-Shot AF' mode. It does not allow the user to select 'focus priority' in 'AI Servo AF' mode, however.

If using [option 2: AF/AF lock, no AE lock] the shutter button half press initiates AF and the 'AE Lock' button on the back of the camera turns AF 'Off' (by locking the focus mechanism at the then current position) when it is pressed. Exposure is not locked until the shutter button is fully pressed. This should allow 'shutter release priority in either 'One-Shot AF' or 'AI Servo AF' by pressing the 'AE lock' button. As with option 1, there's still no way to set AF priority in 'AI Servo AF' mode.

Option 3 is like option 1 except exposure is not locked with the shutter half press, but is set when the shutter is fully pressed.

For what you want, set C.Fn-6 to option [2: AF/AF lock] and use 'One-Shot AF' mode. When you press the shutter button the camera will focus before firing. If you want the camera to go ahead and fire, press the 'AE Lock' button on the back that has been remapped to 'AF Lock'. The camera will fire immediately.

Not the answer you're looking for? Browse other questions tagged canon autofocus camera-settings or ask your own question.

3
Is there any reason you would use one-shot focus over AI-Servo?
2
Canon EOS 400D - Shutter Release Lock Override

8
Is there a Canon equivalent of the Nikon D3100? If so, what is it?
8
How do you trap focus on DSLRs without native support for it?
2
How do I fix a lens with a problem returning to autofocus mode?
4
How can I avoid camera shake while using Canon 6D's Auto Exposure Bracketing?
1
How to get fixed/consistent exposure for a series of shots using remote trigger?
1
Nikon focus and recompose: identifying behaviour on different models
2
Canon EOS 400D - Shutter Release Lock Override
0
Nikon Ch and AF-S mode - what controls whether the camera will try or not try to refocus during series?