I've got a Macbook Pro 15" (2017) with a BenQ SW271 connected via USB-C. I've calibrated both using a Spyder 5 Pro, and straight off the bat after calibrating the BenQ felt that it was leaning towards a green cast. Compared with the Macbook's screen, it's certainly much colder looking.

The way I see it the problem is two-fold:

1) I do realize that I'll be hard pressed to have the two displays look exactly the same, but the difference here is causing some serious eye strain. Should they not at least look in the same ballpark when calibrated with the same sensor, albeit different software?

2) When I turn off all light in the room, set my DSLR to all manual, focus infinity, wb 5600ish (shot in raw so who cares though) and do center-screen shots of the same bright-white color – one for each display profile – the results puzzle me. The two profiles I've calibrated with the Spyder will yield RGB histograms as follows: 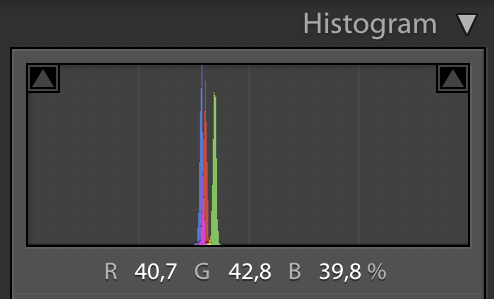 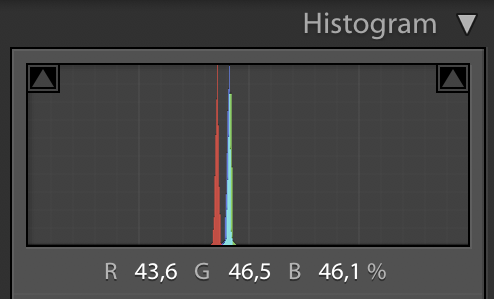 Switching to the pre-calibrated Adobe RGB profile, that shipped with the monitor, yields the following: 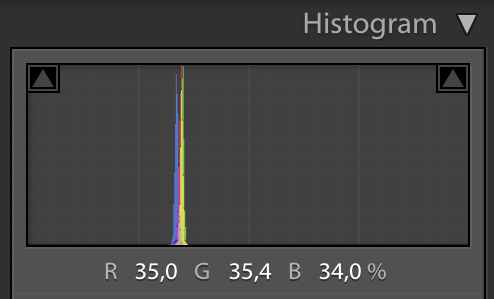 Shouldn't the RGB of bright white align? It feels to me like the factory calibration is better than my Spyder calibration results in.

Each software is getting data from the same sensor and then using different algorithms to interpret the data received from the sensor. This is how opening the same RAW image with different RAW editors will produce different images on the same monitor.

Shot in raw so who cares though?

Raw files only contain monochromatic luminance values for each photosite (pixel). Whatever your histograms are showing is from a demosaiced version of the raw image file. The color channel multipliers used in that conversion to color will affect how the histogram looks with regard to each color channel.

Even if you set the camera's color temperature to the same color temperature as that to which your monitor was calibrated, any variation from the solid white spike you expect could just as well be caused by inaccuracies in your measuring device (that is, your camera's sensor and its image processing pipeline) as it could be from the monitor's actual miscalibration.

Monitor Calibration is frustrating, isn't it? Here are tips from decades of dealing with this issue.

Not the answer you're looking for? Browse other questions tagged color-management display-calibration or ask your own question.

4
Is there a Benefit Getting a Colour Managed Monitor when you work in 8-bit Colour?

6
Color calibration red color cast
3
Should I return my new wide-gamut monitor or buy an expensive calibrator?
3
How to fix oversaturation on a color-calibrated monitor?
3
How to calibrate 2 monitors identically?
6
When to choose D65 and when to choose ambient light temperature for white point for display calibration?
1
Is a monitor ICC profile necessary for accurate color rendering by Lightroom, Photoshop, etc.?
2
Should I adjust the settings of a monitor before calibration?
1
How to emulate sRGB on wider gamut or buy only sRGB monitor?
1
Colors look different after exporting from photoshop even after Calibrating my laptop