My Canon DSLR is showing “Err 01” — should I send my camera for service? [duplicate]

My camera is showing:

Communications between that camera and lens is faulty. Clean the lens contacts.

I have been using this camera for a while and when this text first started showing, I would follow steps on YouTube on how to fix it (turning off and on the camera multiple times, wiping everything throughly) and it keeps on happening.

I then came across a photographer and he said he have never sent his camera for service and he would just clean the body-lens connector with a rubber eraser. It surprisingly works — but that worked for two hours at first, after many use, the rubber eraser method fails after only 5 shots. What is happening and what should I do? 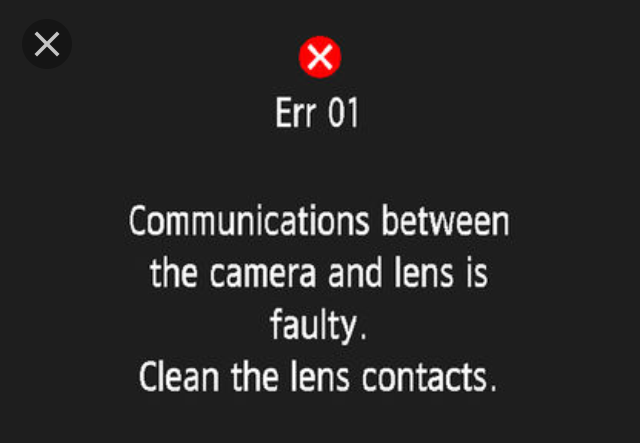 Your camera or your lens has an issue.

You don't have the knowledge, training, or experience to diagnose and correct the issue. You've already tried most of the things many of us would have done in an attempt to rectify the issue, but without success.

The next step is to get someone who does know how to diagnose and repair the issue to look at either the camera or the lens, depending on your result from the above suggested testing.

As always, if the camera or lens is older and/or not worth as much as the repair might cost, whether to repair or replace the camera and/or lens should also be carefully considered.

As you stated, the Err 01 error is telling you that there's a communication problem between the body and lens. This is often a result of dirty contacts on the body, lens or both. Other times this error occurs because of faulty pins in either the body or lens. Take your camera and lens to a camera shop and use the lens on a different body and use one of the shop's lenses on your body. This test will show you whether the problem is with the camera or your lens.

If you've been using the camera for a while and this issue has recently occurred, then you're likely having a mechanical issue. If you just purchased the body or lens, then it could still be a mechanical issue, too. But, it could also be a compatibility issue with lens/body which does happen when using 3rd-party lenses. Make sure your camera has the most current version of firmware.

Not the answer you're looking for? Browse other questions tagged canon troubleshooting error or ask your own question.

2
Why an I getting Err 01 with my Canon camera and lens?
4
Canon EOS 1000D gives Err 01, then phase-detection AF stops working
3
Spilt Isopropyl alcohol on camera, now it doesn't turn on