How can I achieve turquoise in Darktable?

I'm new to Darktable but I have my workflow in Lightroom.
My main style is turquoise color (based on blue) and I wanted to do that in Darktable but I cannot manage to do it.

How I do it on Lightroom:

Plus some minor adjustments but these are the main one.

Here you can see a before/after of what it can do: 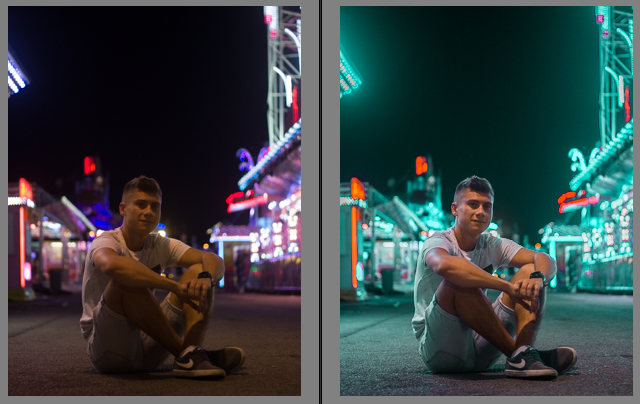 I cannot achieve this in Darktable because I can only change color in Color Zone. And when I shift Blue toward Turquoise, the color become greenish, and it's weird.
Anyway, I hope you can help me :)

A quick way to do it, which does not create the exact same result, but it's turquoise alright, is to use the color correction module and move both the white and the black dot to turquoise. 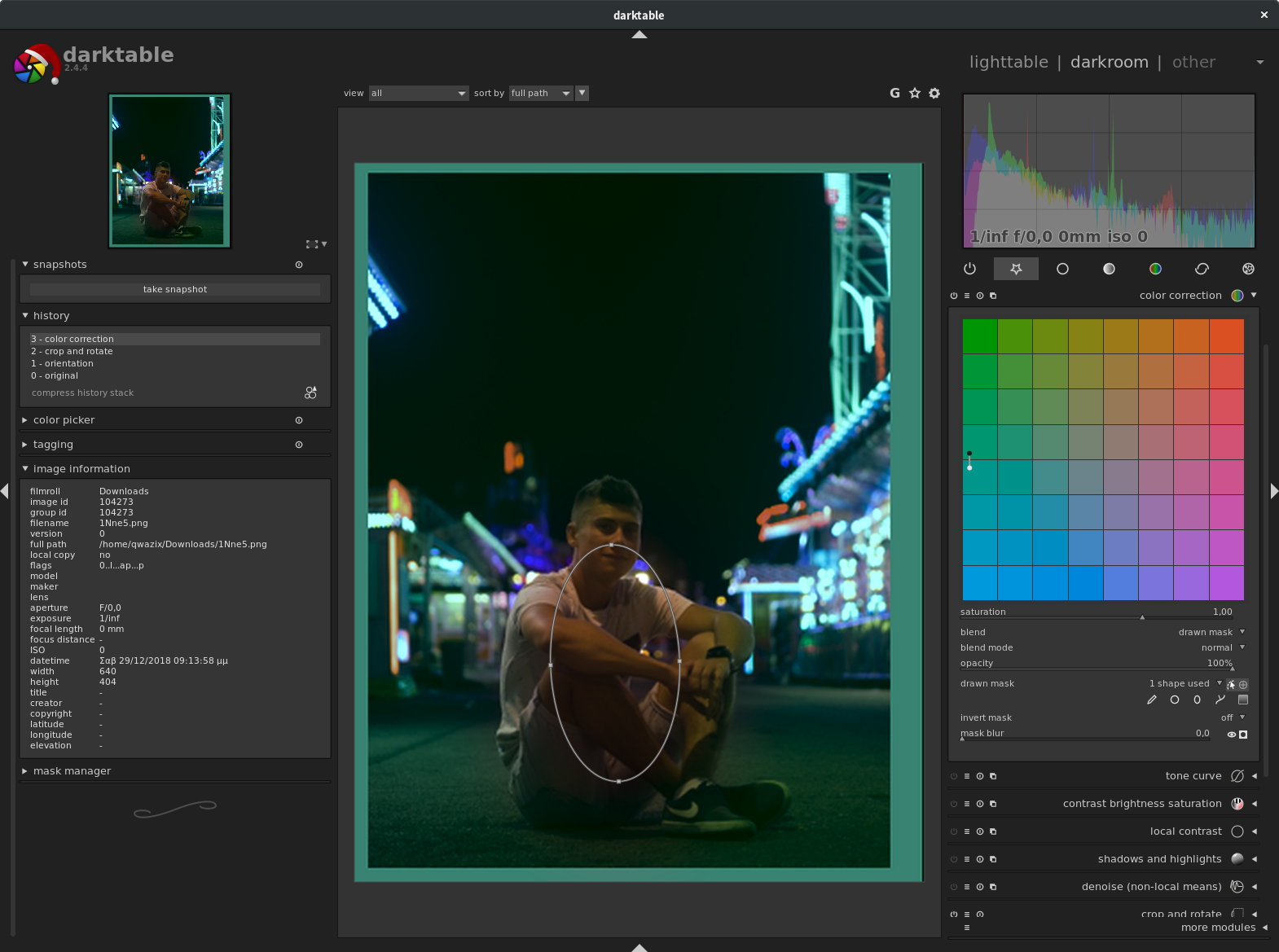 The colorize module with a blending mode of overlay also produces a similar effect (here I didn't add the drawn mask to exclude the subject, you'll have to do that yourself) 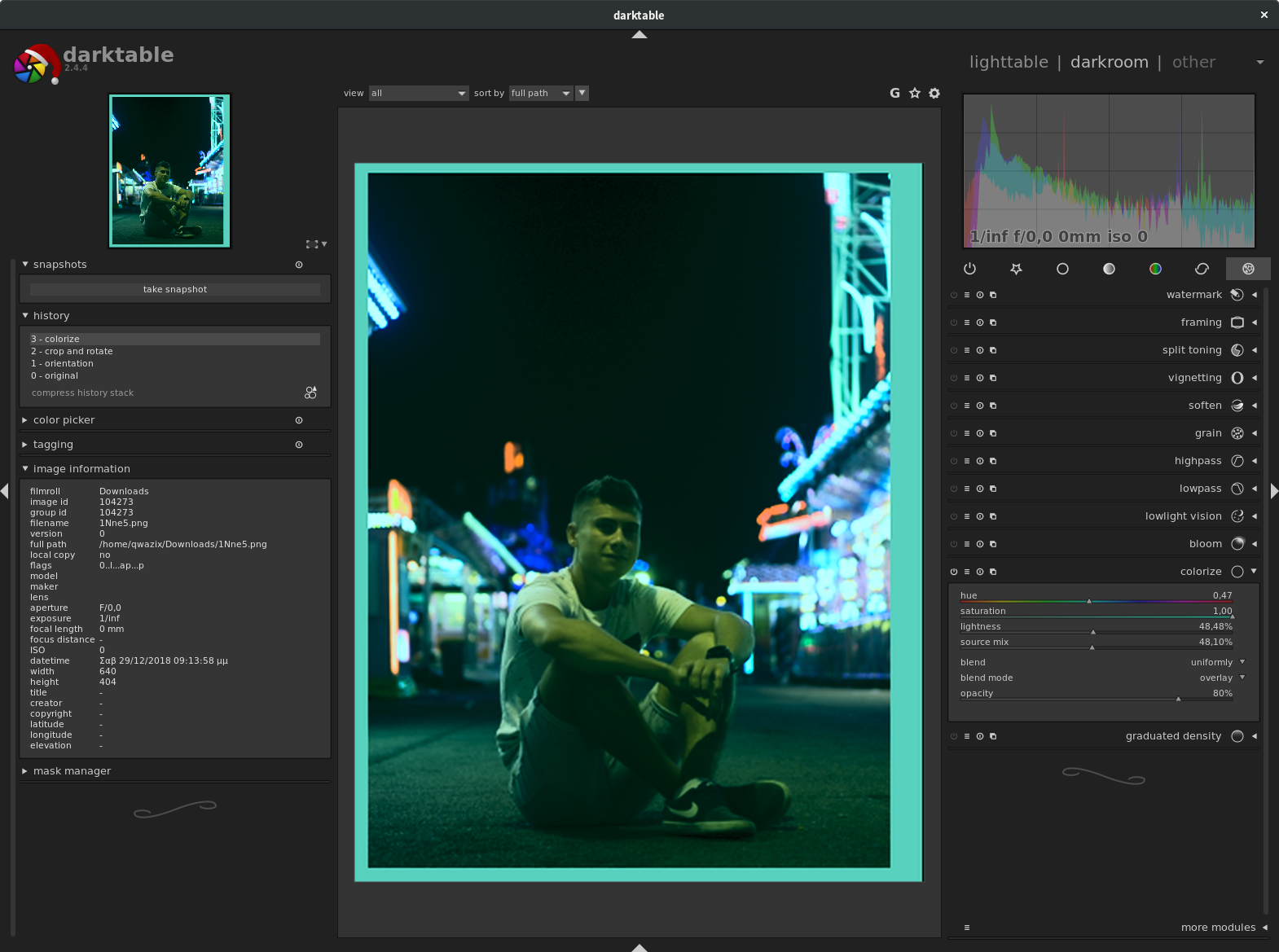 The closest I came to emulate your photo is this, which uses Colorize with Lab Color overlay and two drawn masks (This does not let the blue lights pass, only the red ones (see the mask values). It doesn't apply to very black colors either (not shown) 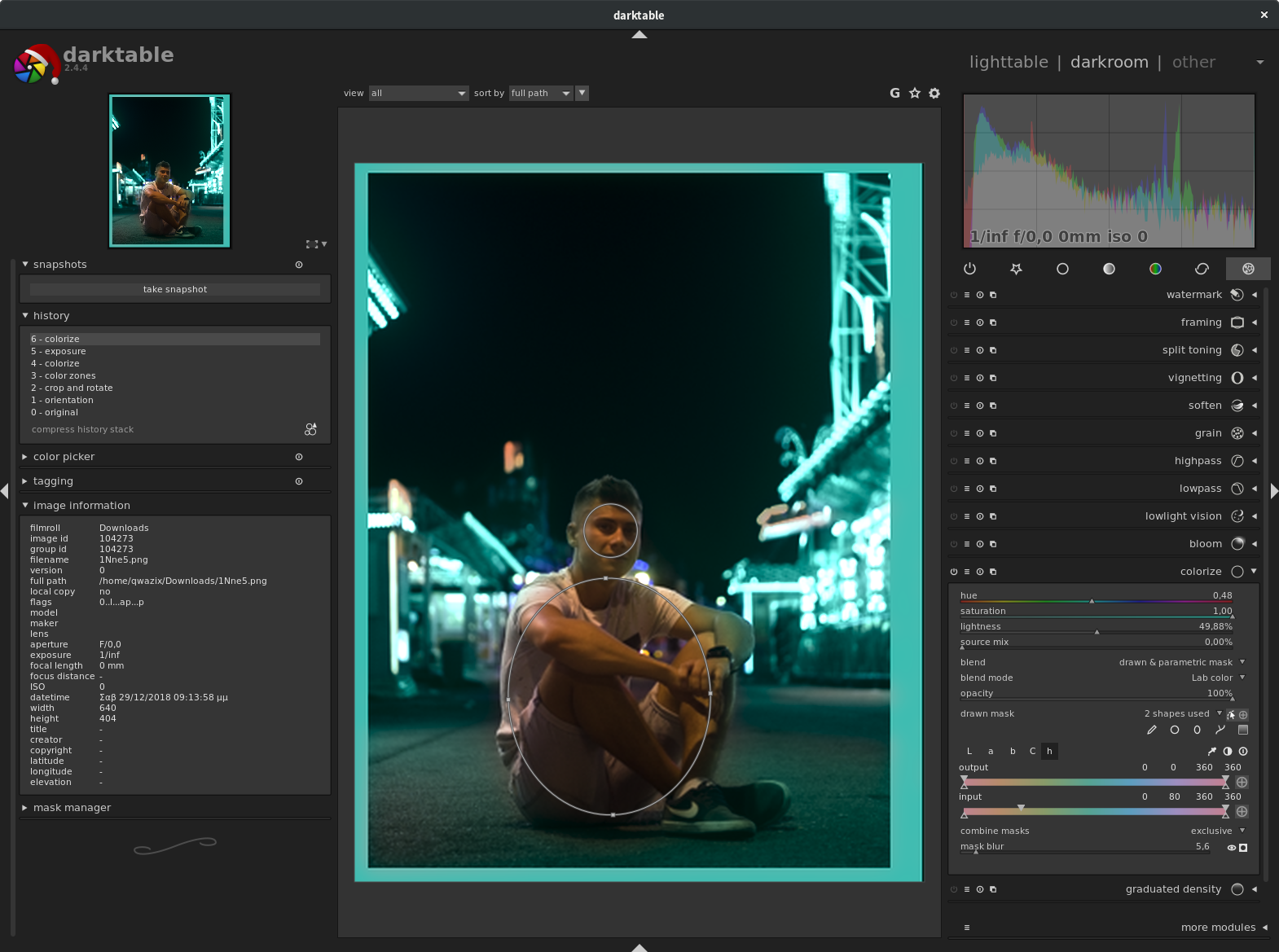 I worked on a similar scenery and solved it mostly by tone curves and colour zones. 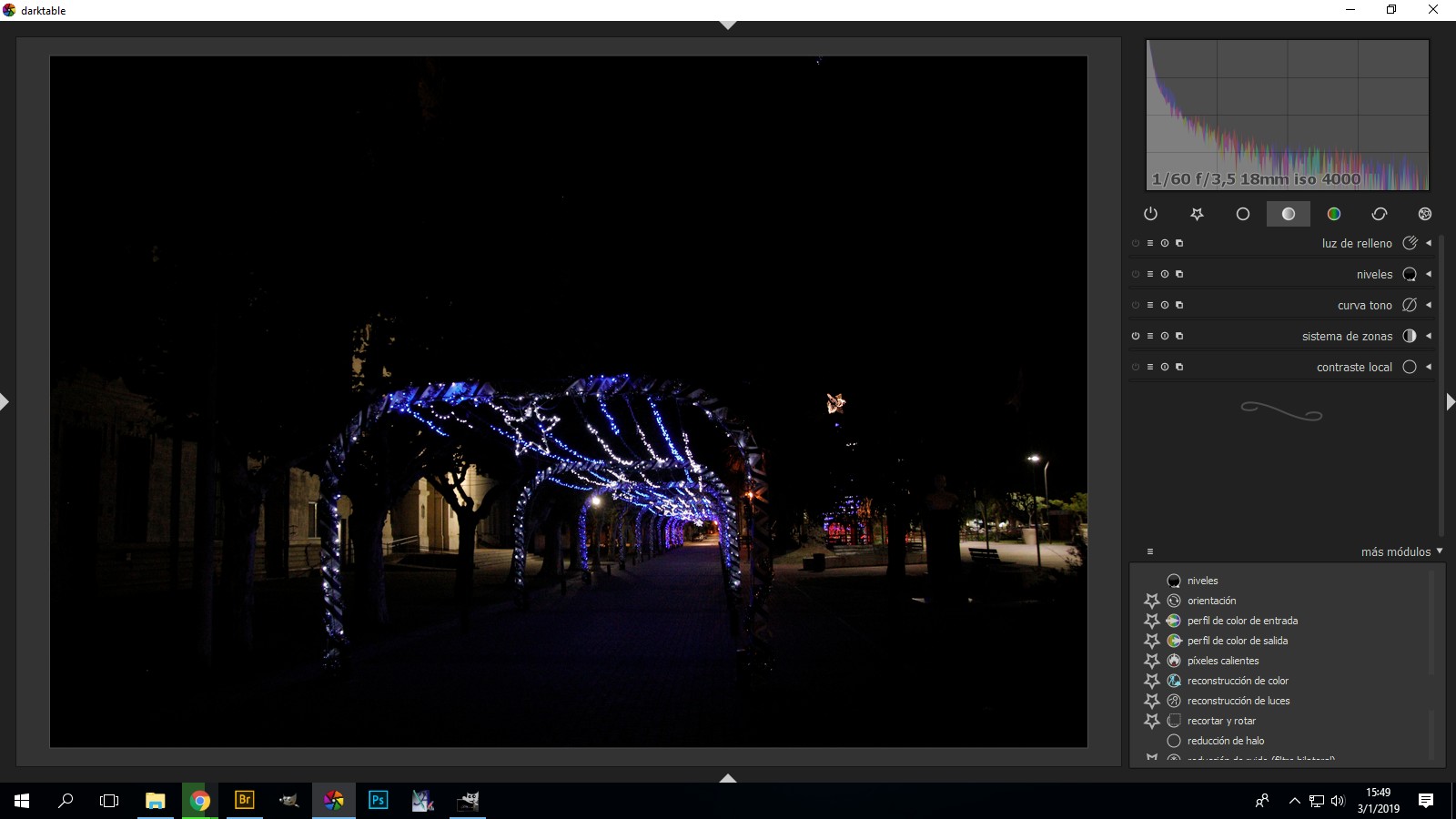 Definitively, I didn't go the easy way on it, but I think it might be useful to know some useful darktable's modules.

At first, I used zones system to ligthen zones close to black that I wanted to be seen. Specially the reflections on the ground.

When doing so, iso noise became quite noticeable

Then I added bilateral denoising focused on green, to erase green dots and make the reflections look more "purple"

So now, we can start playing with colour. First, I added a tone curve module active on b channel for making blue deeper 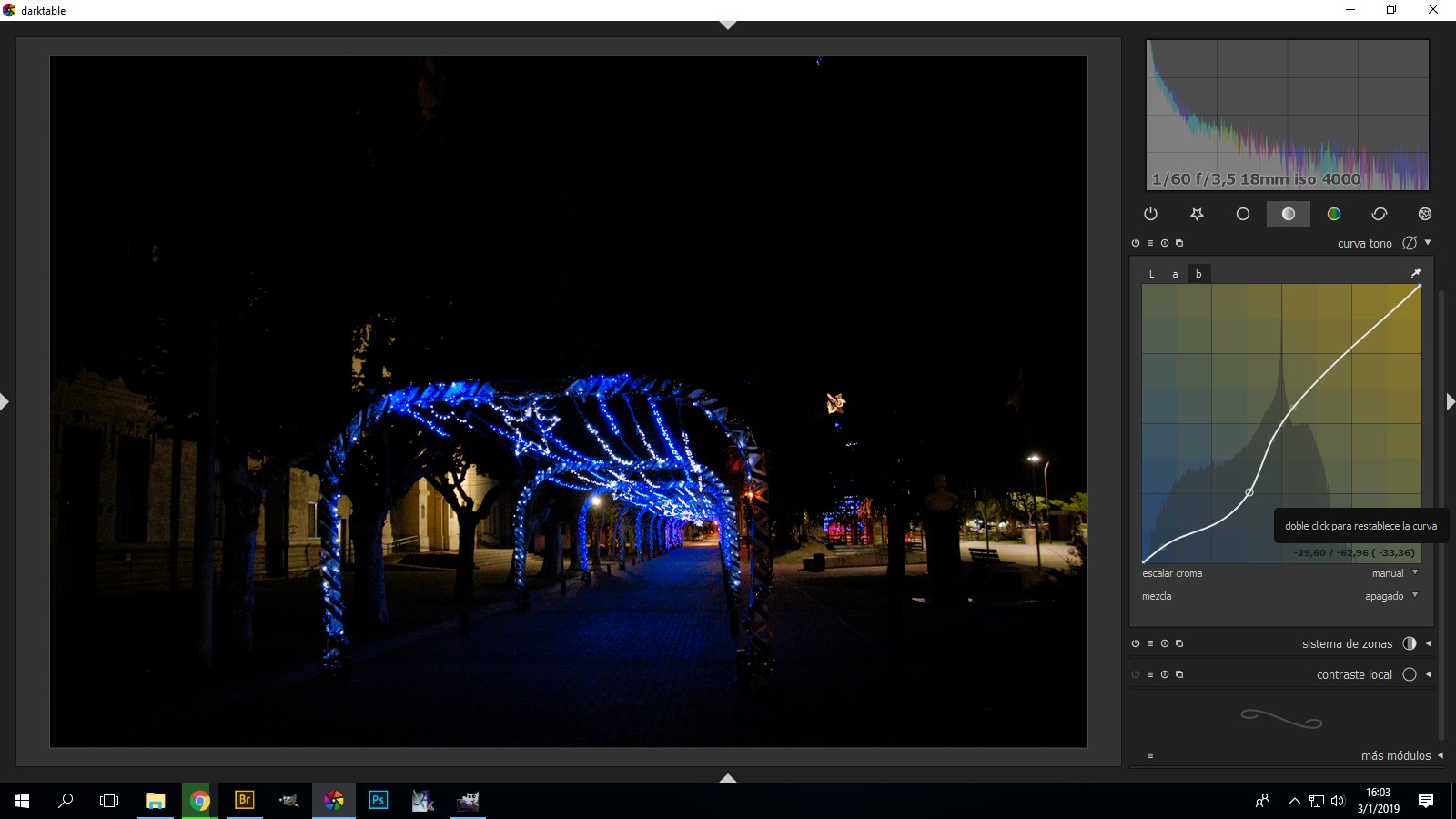 Then, i made a new instance of tones curves, just for comfortably seeing before-after changes. Un this module I'll modify a channel. At first, I want to localize in the curve the average tone I'm looking to modify. I can do it by upper right colour picker. 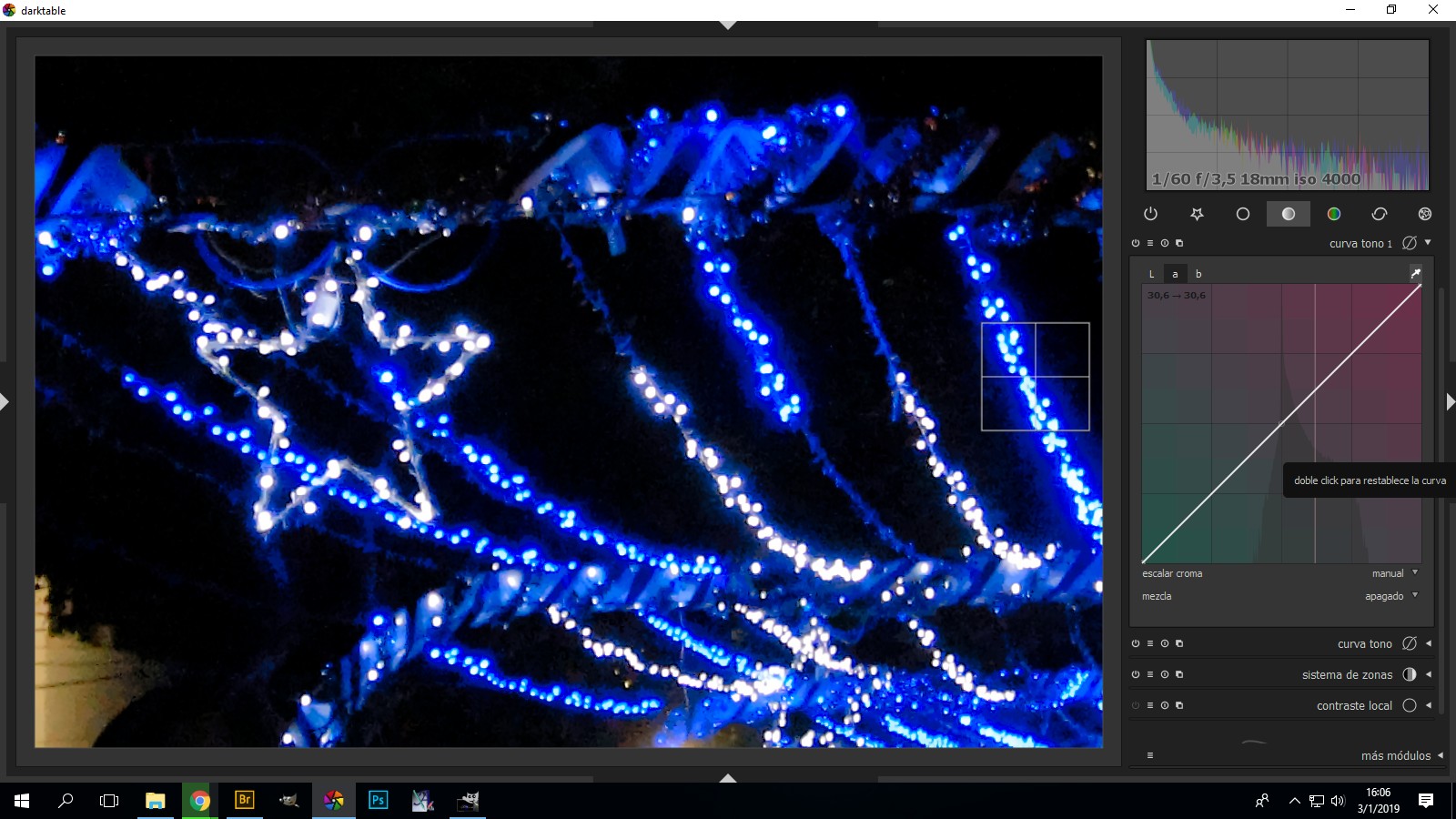 Then, I'll set a parametric mask to isolate the blueish tones I want to transform. Note that the mask is set to visible (down right corner of the module). 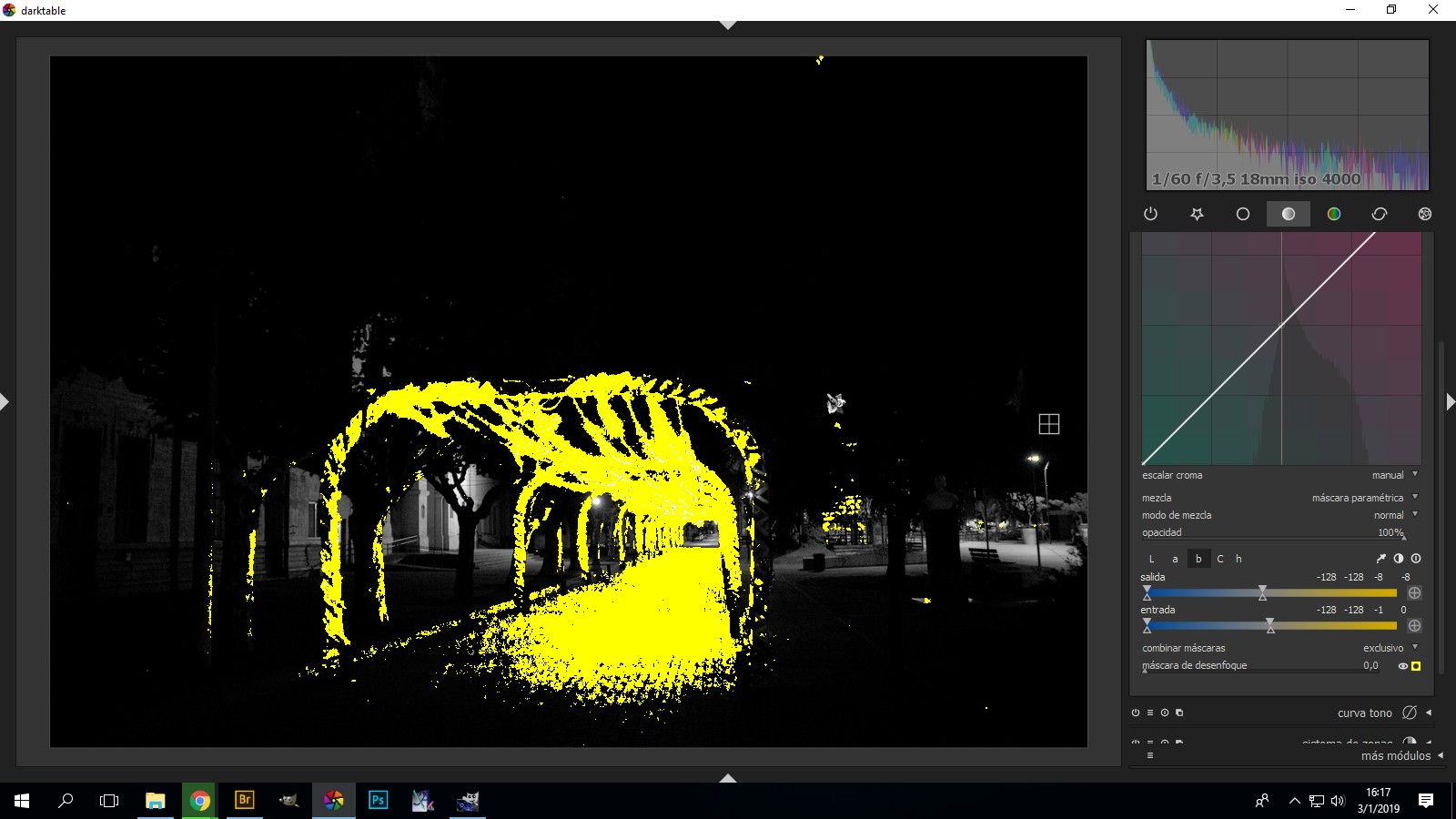 Then, I changed most of the a curve to greenish lower values. The center keeps in its place to preserve white light. 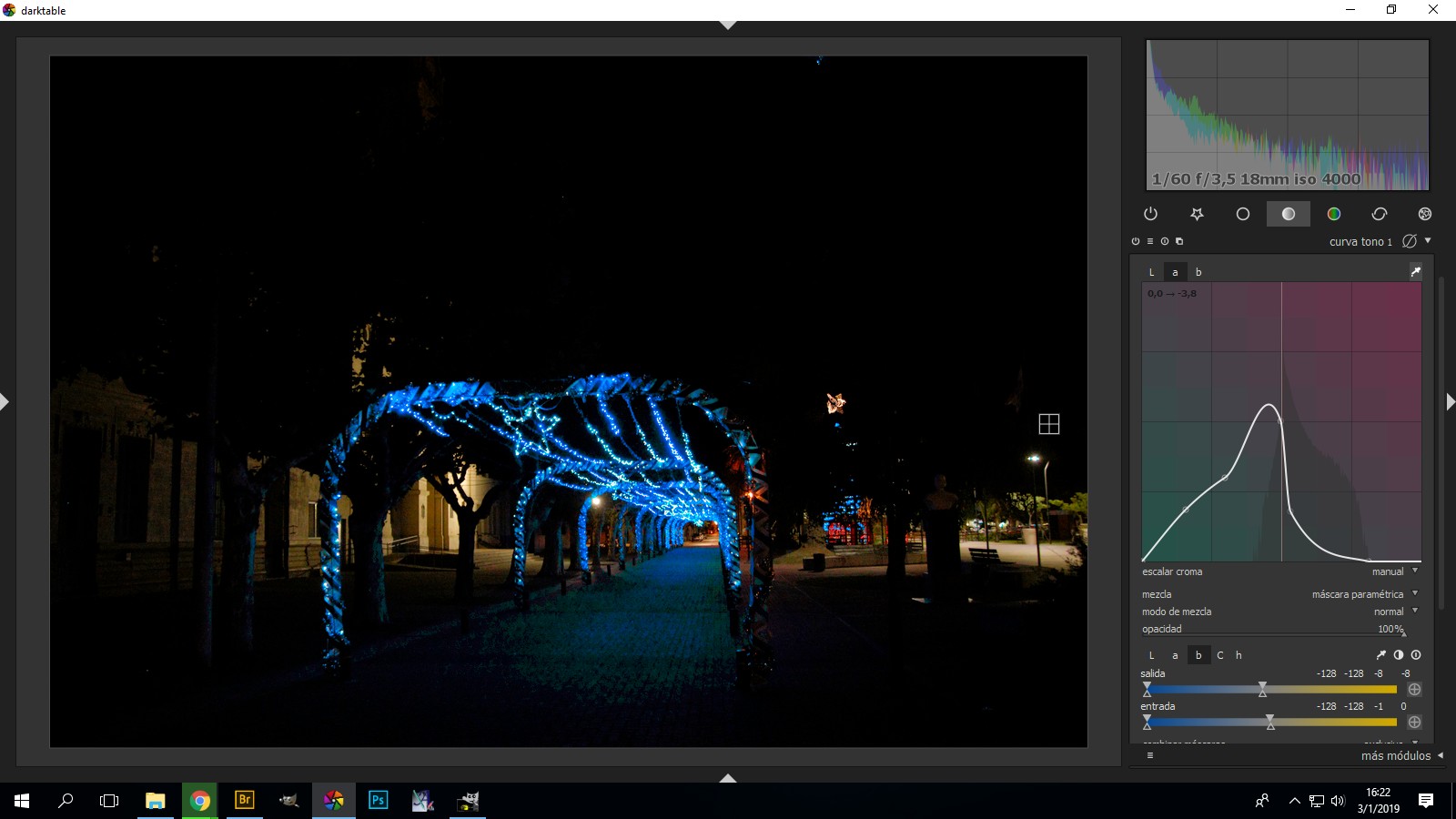 So, I added a colour correction module on a two parameters mask. One parameter was almost the same that the one shown before, and the second parameter, on l channel, was set to prevent the white lights from resulting coloured. 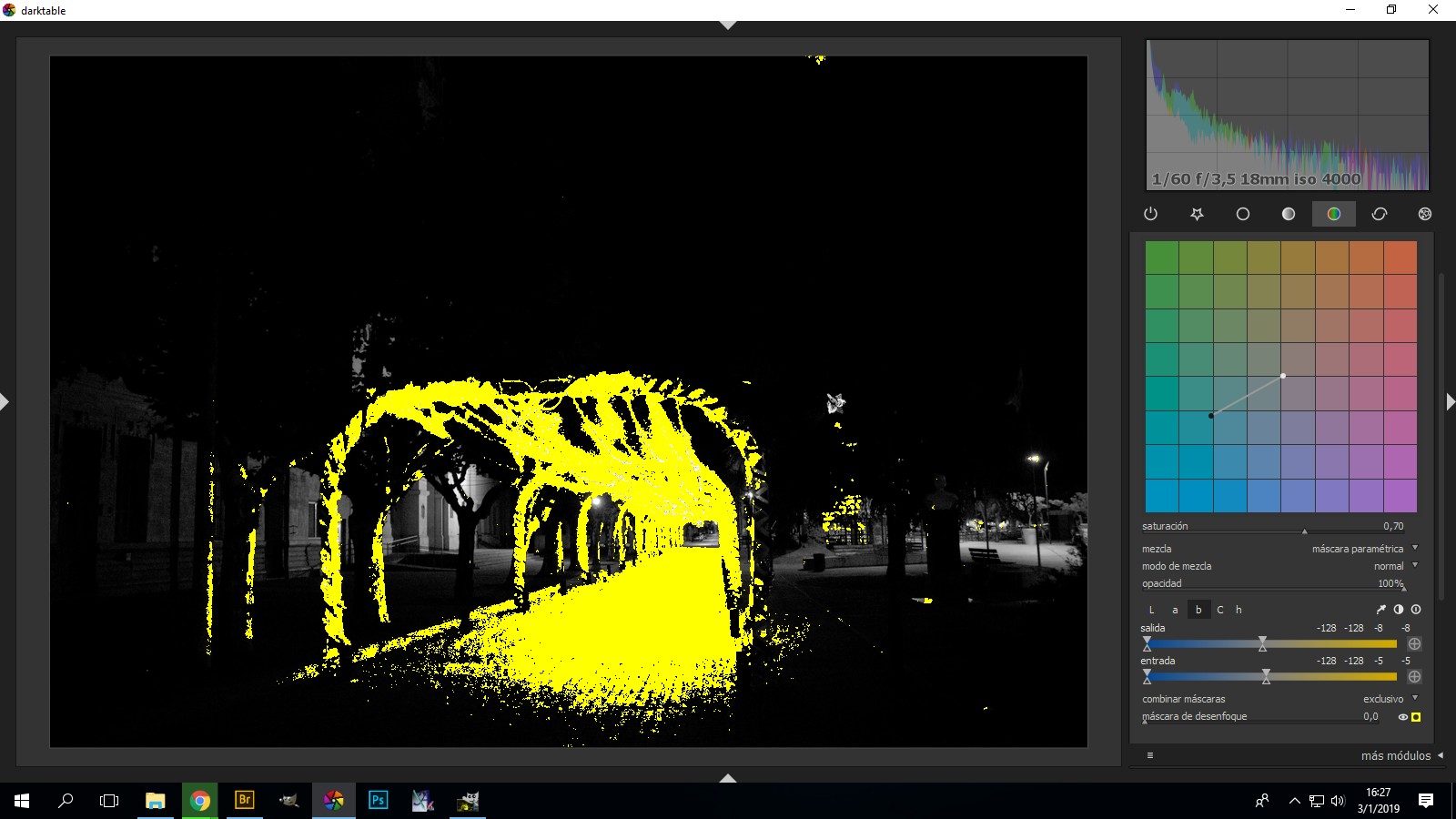 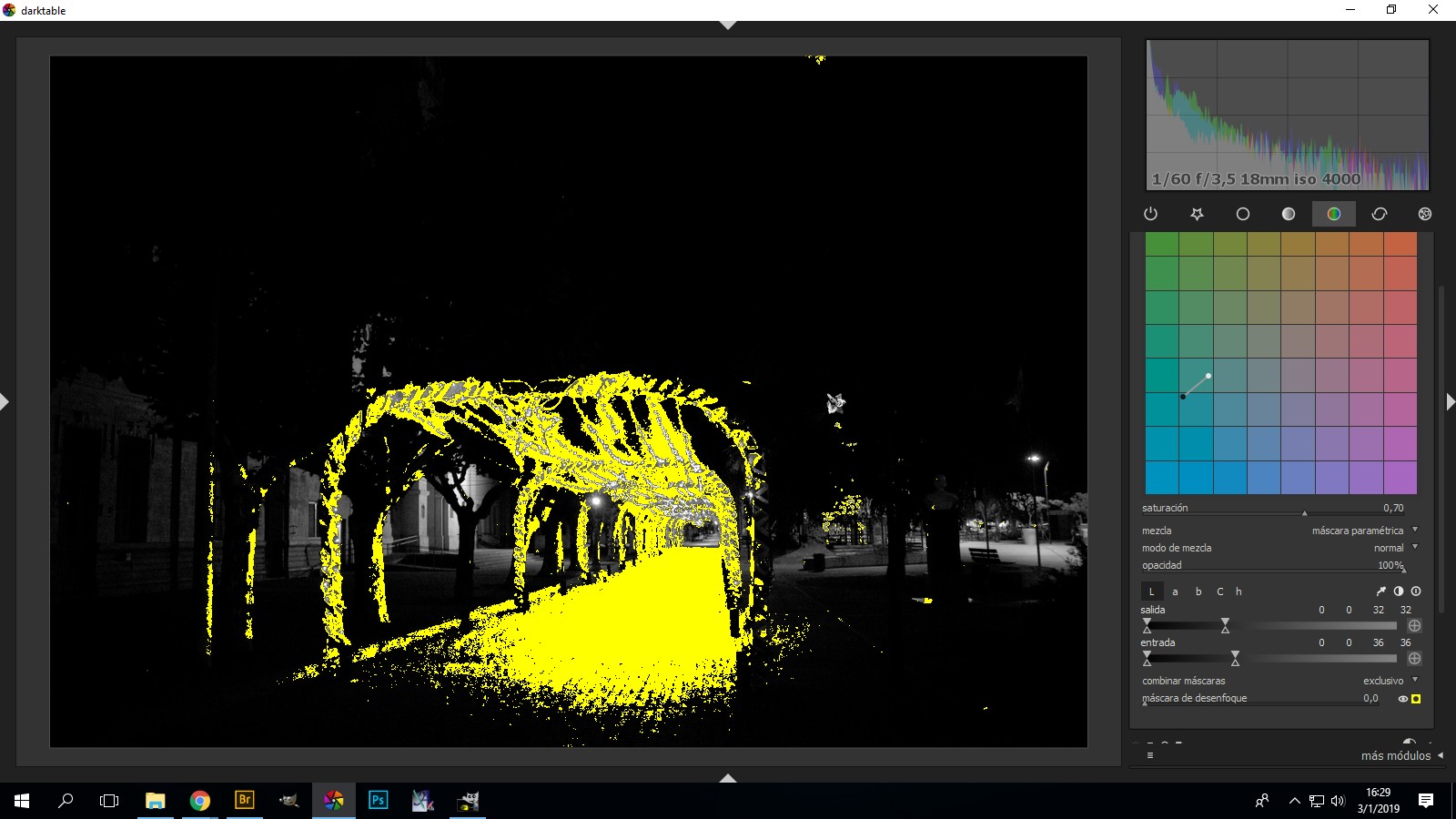 Finally, I went into colour zones module and made the fine adjustments. I intentionally exaggerated some green to make changes more visible on this tiny screenshot. 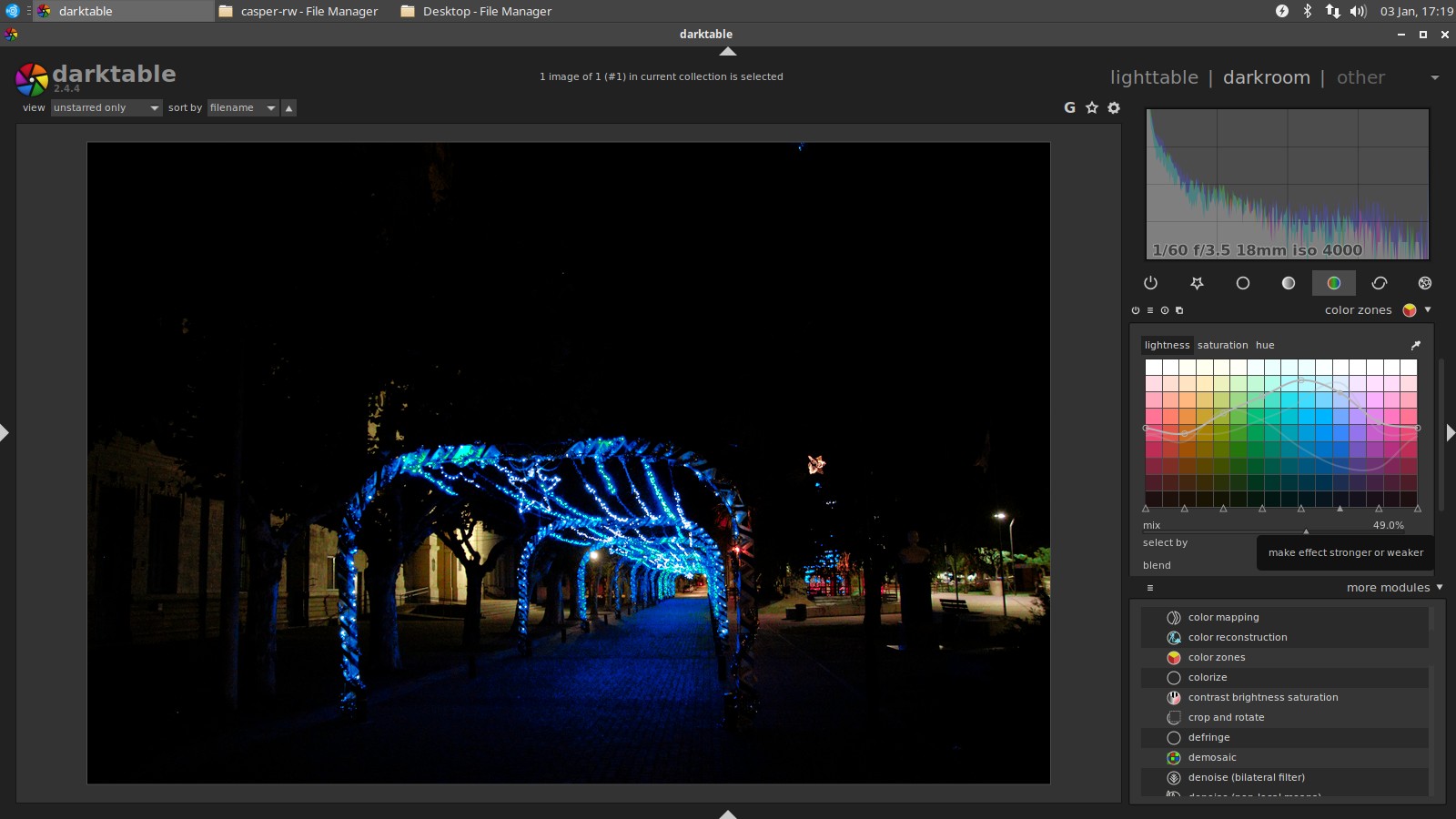 It's still pending to match that soft glow you add to your lights. There are probably many ways to achieve it on darktable.

Darktable has a number of different modules in the 'color group', and I recommend you try some of the other ones if the color zones module isn't achieving what you want. If you do not see them all yet, look at the bottom of the modules section for the text 'more modules' and click on any deactivated ones to enable them.

It's daytime here so I can't re-create your night time scene for an example, but here is what I was able to produce using the color correction module (dragging the selection point down and left, towards turquoise, and cranking up the saturation) plus the channel mixer module (lowered the green and blue values to approximate your background highlight colors).

This was a quick edit applied to the whole image, but if you wish to apply it selectively (to preserve the skin tone of foreground subjects) you will have to explore the 'blend' options for each module, specifically the parametric masks.

Not the answer you're looking for? Browse other questions tagged lightroom darktable or ask your own question.