Is there an app that shows location-specific times of sunrise, while considering line-of-sight obstructions, such as terrain?

Taking sunrise/sunset pictures at the ocean allows for photographs where the sun is placed just above the horizontal plane. This allows for "red ball of fire" pictures, such as the following by Johannes Plenio: 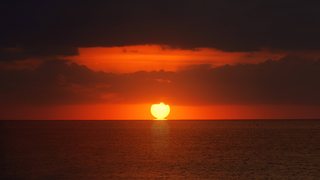 When in the mountains, the terrain often obstructs the horizon so that the sun, for instance, becomes visible later in the morning. By moving the viewpoint relative to the terrain, the line of sight may become unobstructed at an earlier or later time.

Since scouting and researching landscape compositions is difficult when you are unfamiliar with the local region, a software tool that helps determine what terrain features influence line of sight to the sun or moon would be a great help to me.

Is there such an app, website, or other software that takes locations within a certain area, elevation data from Google's terrain map, along with the sun's position for a given morning or evening to show where the sun will rise or set?

I am asking because I have yet to find a resource for this despite having purchased a few photography 'helper' apps such as SunSurveyor. Although the app allows me to approximate the time of appearance for a single location, it doesn't provide a way to show when sunlight is expected to appear or disappear over a wide area.

The Photographer's Ephemeris is a very popular app used by landscape photographers who need to know when the Moon/Sun is going to be at specific spots. It may be of great help to you.

I found this partial solution here at StackExchange. While I am not sure of the precision to which this calculation is made, it is a first step. Now, if only the results could be calculated for a specified area and then laid over a map as a contour plot to show sunrise and sunset times... Same goes for the moon! Thanks in advance to @erikwkolstad ☺

Not for mobile yet, but you can also use a free tool that I've developed with a colleague. It computes the actual sunrise and sunset times for any location worldwide, accounting for terrain. The example in the image is for Chamonix in France. Go to suncurves.com to find your own location. Hope you like it! I'm using it for all my outdoor shoots. 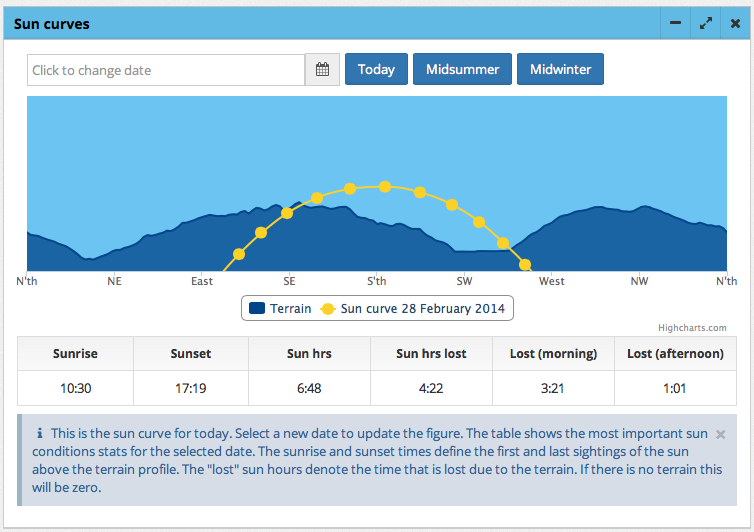 I wanted to note that maker of The Photographer's Ephemeris app for iPhone and iPad also makes The Photographer's Transit which seems to addresses the issue of 'apparent rise and set of the sun/moon'. Unfortunately, it seems only to be a feature for a given location and not a contour plot of the results of the 'terrain mapping' calculation. Similarly, the iPhone and iPad app Helios Pro does the same 'apparent sunrise/set' but only for a single area. If I am missing a feature in either of the apps or have made a mistake, please let me know.

Interestingly, Google Earth Pro allows you to change the time of day in 3D mode to see a representation of how the shadows will fall due to topographical features. I can't say that it's the best, but it will give a general idea... Here's the Grand Tetons at ~7:30PM 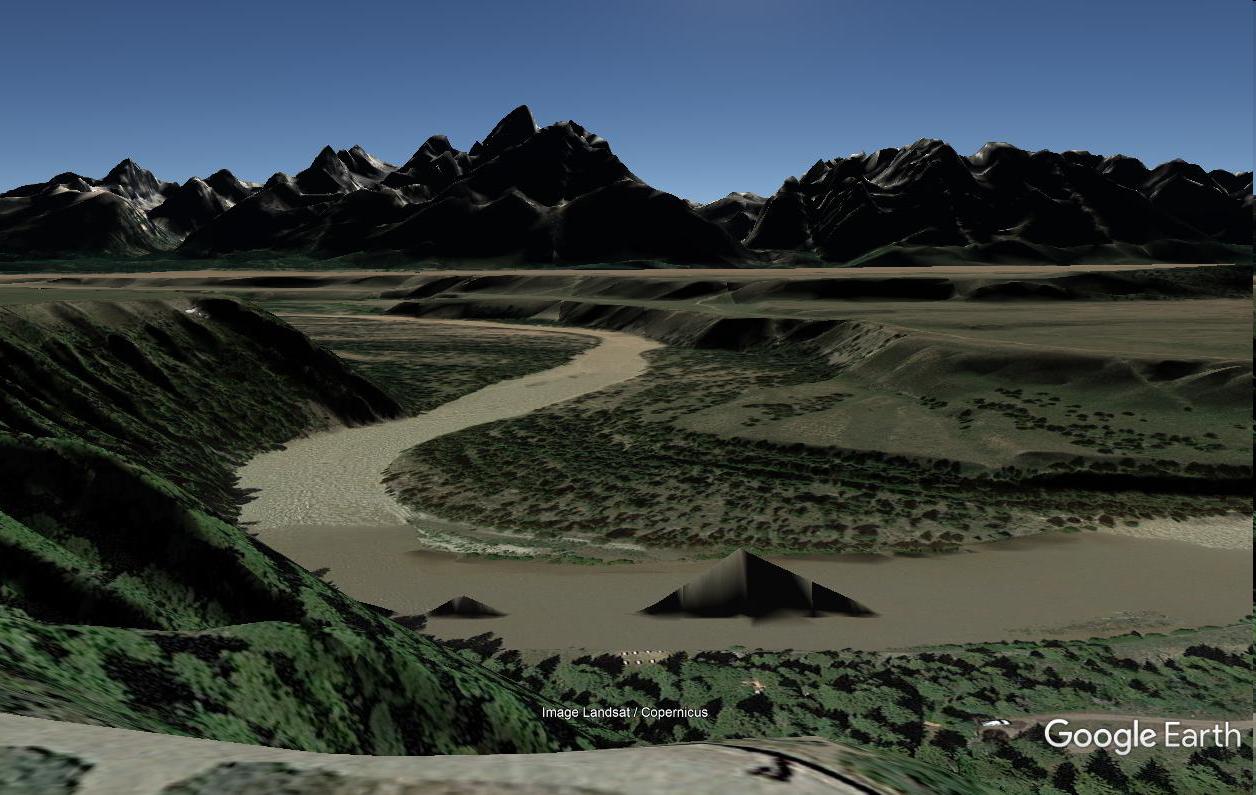 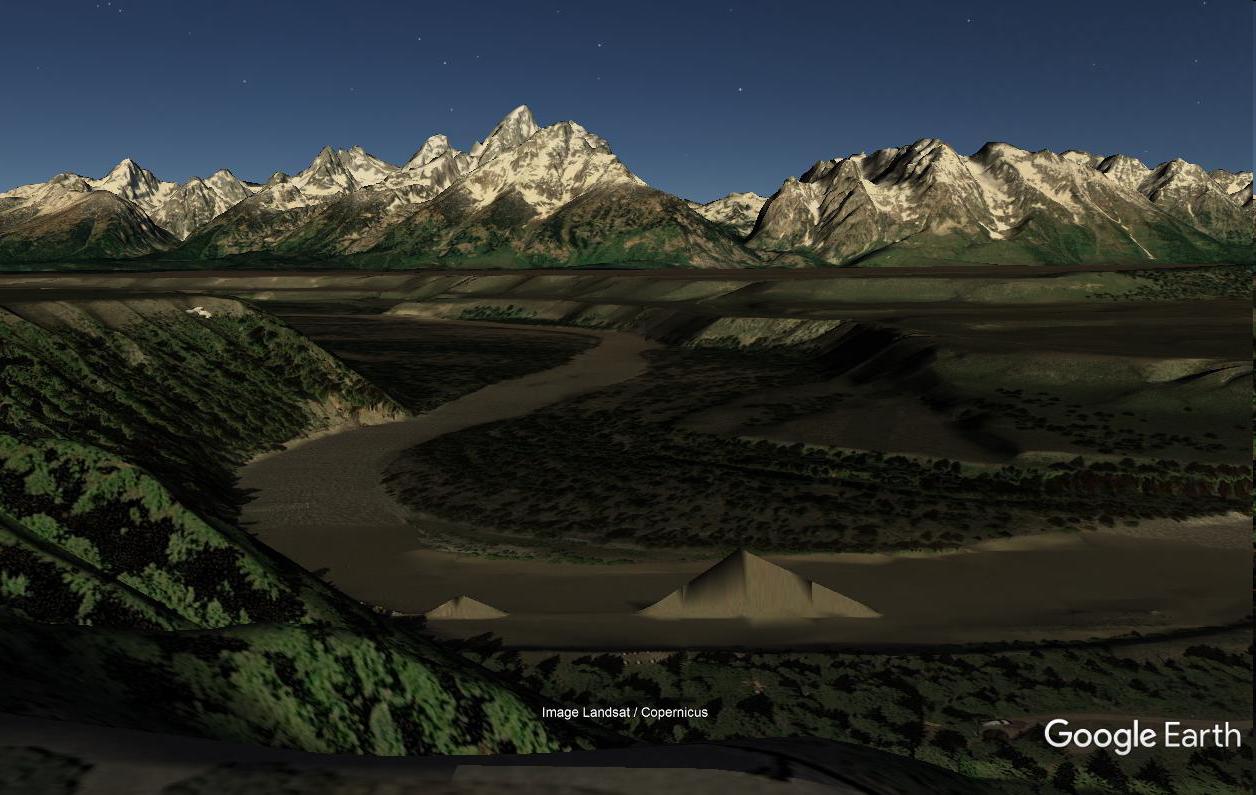 For the Sun and most major celestial objects, this US Naval Observatory tool may be what you want. However, I suspect it is not exactly what you are seeking, as you seem to be interested in local obstructions somewhere in your line of sight. Data for that would seem an extremely difficult job to know.

Use Form B for international locations. You will need to enter the latitude and longitude. Although it is not specifically about local obstructions, you can enter your elevation in meters, which affects the horizon angle.

Sun Calculator is a moderately easy web app that serves several of the functions you're after, if not all. Its basemap is google maps with map/satellite toggle, so you have the possibility of at least interpreting the terrain

18
Are there any mobile applications that calculate sunrise/sunset based on location?
5
How do I plan for the lighting for landscape photography?
2
App that tracks sun AND incorporates topography?

18
Are there any mobile applications that calculate sunrise/sunset based on location?
4
What does the under/overexposure warning mean in image editing software?
3
Automatic identification of lucky images for landscape photography