What techniques were used in this late 1970s car ad featuring a family picnicking with giraffes?

Judging from the registration number, I am guessing it is a commercial poster for/in the UK. 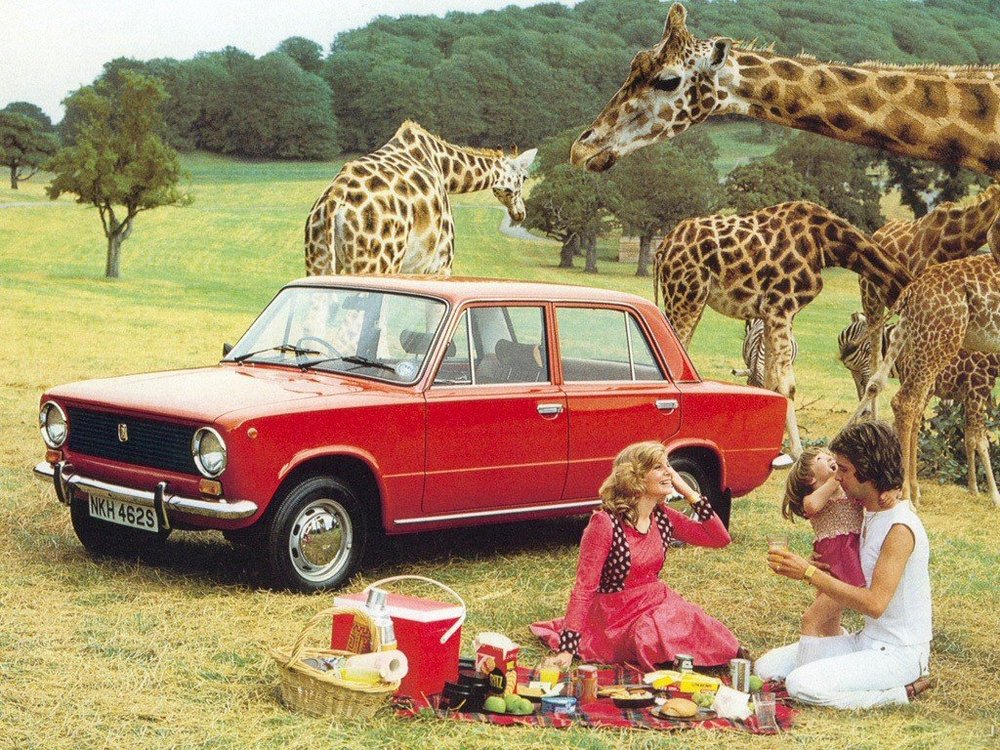 Here is a version with the full advertisement, although the scan appears to be of lower quality: 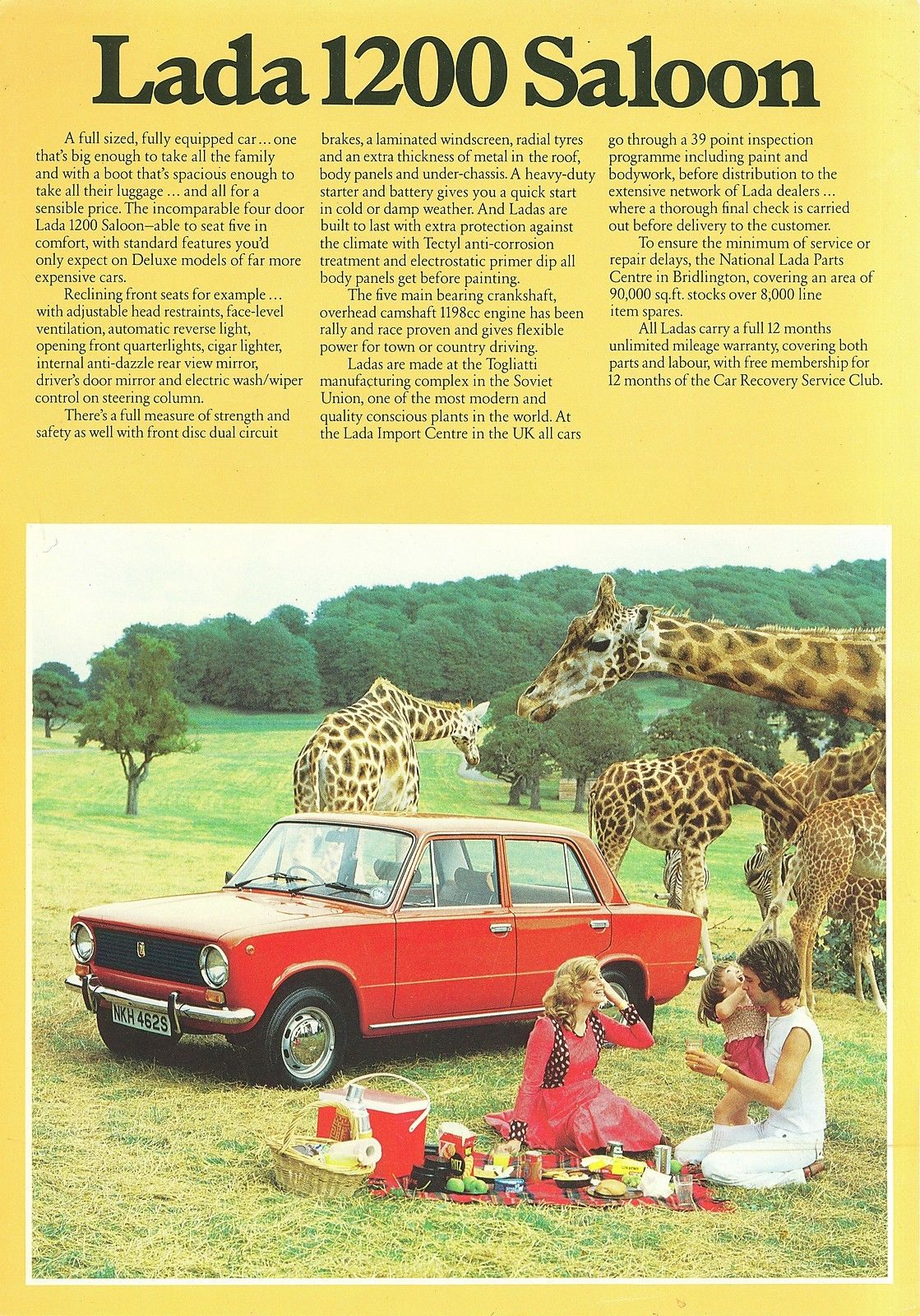 More than a comment, less than an answer, because I have no clue what camera/lens/film...

The car's registration plate sets it firmly between August 77 & July 78 - the letter is the year for old UK plates S=77 Ref: http://www.theaa.com/car-buying/number-plates
There's prestige in having a 'new' plate, so there's a high probability this was even shot before August using a not quite legal plate, for an advertising campaign set for August that year.

It's just wild speculation, but it wouldn't surprise me at all if they didn't just take the car to Woburn Safari Park-[Google Maps satellite view] & park up next to the giraffes.
It was the 70's. People were less concerned with animal welfare than they are now - although the animals at Woburn are used to seeing cars, as it'a a drive-through tourist experience.

Pic from their web site 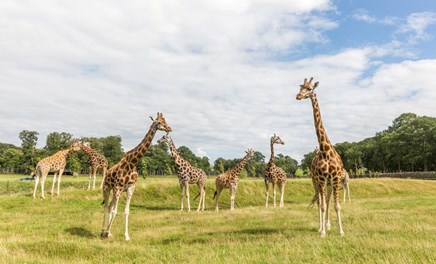 The tree types & road style match.
There's nothing in the wheel hub reflections to hint they're not where they look like they are. In the 70's I wouldn't have liked to try airbrush the giraffe into the refection on the top of the car.
The only hint of 'fake' I think is the nearest giraffe, head & neck coming in from top right. It just looks a bit too convenient & looks like a hint of rim-light. It might also be covering a bit of ugly background where the road bends round the hill.

I found a larger version of the image on http://vsi.reactor.cc/tag/ваз 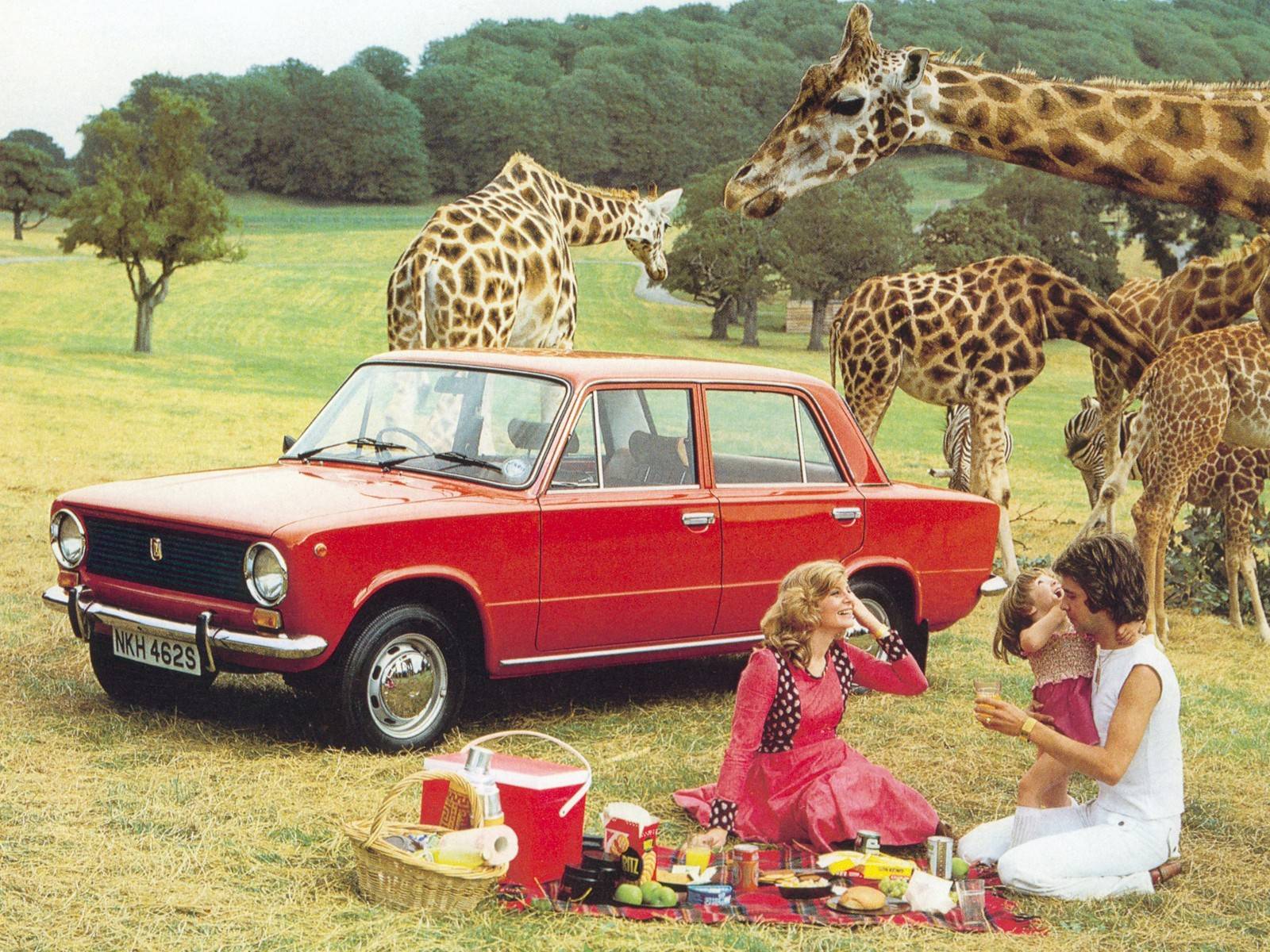 Which gives a slightly clearer reflection in the front hub cap, of, I think, one of the giraffes.
It is possible that reflection is actually of the 'fake' top right giraffe... which might make it 'not fake'. The child also appears to be looking up at it, so it might in fact be real & the rim-light possibly a sign they had some additional lighting.
The soft shadows really don't give much more of a hint than it's a fairly standard English cloudy summer's day. The sky might be washed out, but we do actually get almost totally white skies some days; very thin cloud, but total coverage.

As an example, this is a quick snap from my workroom window - taken today, just before noon, mid-summer. Typical British summer sky... 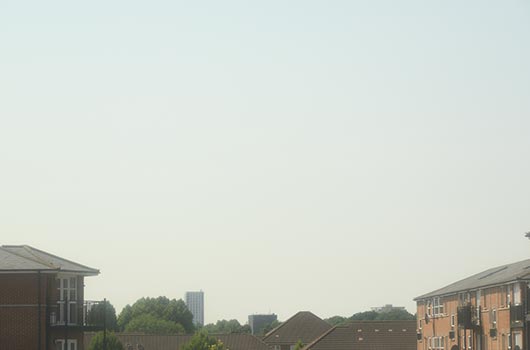 Based on the time and usage of the image it is almost certain it was captured using a large format camera, a lens set to a fairly narrow aperture, and with high quality, fairly low speed film. The point of focus seems to have been centered somewhere on the car.

In the late 1970s almost all commercial photography for major ad campaigns was done with large format cameras.

There's one other aspect of the photo I find interesting. Although it is not them, the adult "couple" in the ad look a lot like British fashion trendsetter Pattie Boyd and her boyfriend musician Eric Clapton would have appeared in 1977 with regard to her hairstyle and facial features, his clothing, etc. This was during the period after Boyd had divorced ex-Beatle George Harrison and had become romantically involved with Harrison's friend and fellow musician Eric Clapton. She was considered by many in Great Britain to be the "queen" of British fashion and pop culture and he was considered a "guitar god" by music fans. One or both of the two were often on the front page of tabloids in the UK and abroad during this time period. Even if there was not an intentional decision to use models and styling that resembled Boyd and Clapton, it seems at the very least their influence on how many Brits chose to look and dress at the time affected the depiction of a domesticated but still "hip" young couple by the ad creators.

Not the answer you're looking for? Browse other questions tagged color commercial-photography cars or ask your own question.

8
What type of postprocessing gives the effect of people standing out against a flat-seeming background?
12
How do I achieve this creamy black and white look?

6
What sort of color correction and effects are used in this photo?
4
How to invert color negative "scan" via DSLR without clipping the red channel?