First time - Night Club Photography - what gear do I need?

One of my friends wants me to shoot some picture of him/people at the club where he is a DJ. But I just started out so I don't have so much knowledge on it so I need some help.

What can I use of my gear?

What am I missing that I need to buy? (maybe a camera flash but what kind)

What camera setting do I need?

You're asking for a "quick tip" or two on how to shoot one of the most challenging assignments a photographer can draw.

Photography is the recording of light. The less light there is to record, the tougher the job of the photographer gets and greater the need for photographer's tools with higher capabilities. Almost everything you learn as a photographer is put to use in one way or another shooting a dynamic scene in low light. No matter how good your gear is you're shooting right at the edge of the envelope of its technical limits.

A club is pretty much a club. They're usually dark environments, often have various kinds of special effect lighting, and people are always in motion. There's not a lot of difference between a school dance, a night club, a wedding reception at night, or an event center hosting a dance party when it comes to the photographic challenges of shooting such an event.

Because of the breadth of knowledge, experience, and skill needed to shoot such an event well, much of the answer below includes links to other questions/answers here at Photography.stackexchange that address that particular aspect of shooting in such an environment and include the nuts and bolts of ways to get those types of shots.

How you shoot it depends to a large degree on what kind of pictures you wish to come away with.

In general you want to use the fastest (widest aperture) lens at your disposal that has a focal length you can use for the shots you want. A 50mm f/1.8 or similar is a good place to start. If you're using a camera with a smaller than full frame sensor, though, you'll probably need something a little wider angle. A 17-50 f/2.8 zoom is usually a good bet for an APS-C camera and there are a few good examples of such lenses on the market. Although this question concentrates on concert photography, the lens issues are very similar when shooting a dance or shooting a concert in a dim club (as the second part of the top answer discusses). Again, this question is also about concert photography but this answer and the comments cover a lot of ground on how to focus in such an environment and minimize motion blur when you wish to freeze your subjects.

You'll be shooting in a dark environment. But your camera doesn't really know that. I mean, the light meter will know there isn't much light in the scene, but it won't know that all of those black shadows don't need to be exposed as medium gray. If you let the camera completely decide exposure, you'll probably wind up with a lot of stuff that looks like the example included in What went wrong with this concert photo and what could I have done to make it better? If you're using a semi-automatic mode, such as Aperture Priority, use -1 to -2 stops of exposure compensation. Understanding how much EC to use and when to use it is an acquired skill that comes with practice and experience. I normally shoot a combination of Aperture Priority (Av) and Manual (M) exposure modes in such a setting. Most cameras will let you set a minimum shutter speed to be used when Av mode is combined with a flash. Without a minimum shutter speed, when using Av exposure mode with flash the camera will assume you want it to slow sync and will quite possibly select shutter speeds much slower. I usually set that to 1/60 second, enter about -1 stop EC and then kick the ISO up until the ambient light in the background is bright enough. Don't be surprised if you need to use somewhere in the neighborhood of ISO 3200-6400 with an f/2.8-f/4 lenses. I usually control flash power via E-TTL and Flash Exposure Compensation when the distances between the flash(es) and subject(s) are constantly changing. Even when I go to Manual setting of aperture and shutter speed I usually let the E-TTL system set my flash power when moving around a dance floor.

You can expect to do extensive post processing to deal with the mixed light sources and increasingly common magenta tinged LED lighting found in clubs. Saving your images as raw files will allow much more flexibility and a wider latitude of adjustment to colors in post.

How was this taken/edited? is a look at how this image was shot/processed: 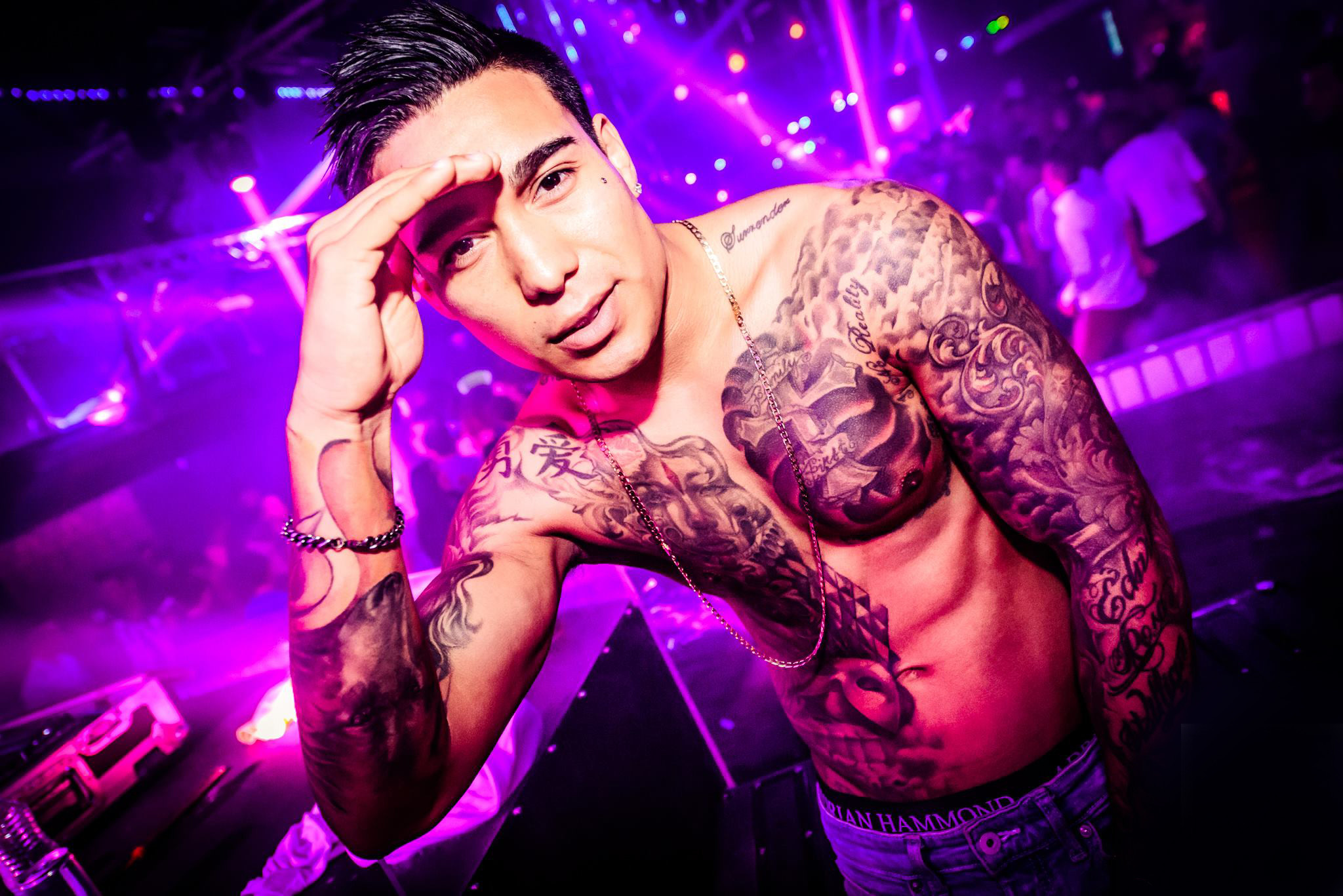 Do you want posed shots of couples/small groups with their friends? Use as much of the ambient light as you can and add only as much as you need with a flash mounted on or near the camera to make sure the people are lit well without killing the "feel" of the light in the room. (Please see the answer linked above for more specifics on how to do it.) 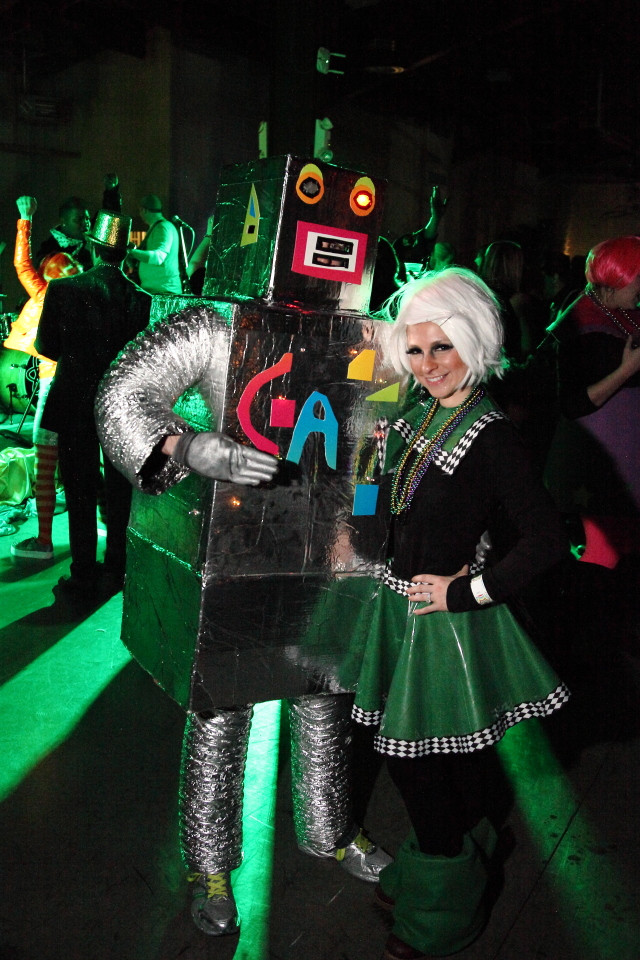 Do you want photos of people having fun on the dance floor? Set up a couple of off-camera flashes controlled by wireless triggers in the room. At this small party I had the flashes on the edges of the room and shot from the middle of the dance floor. This wasn't my best shot of the night but it lets you see how the flash was on the window sill behind the girl on the left in the orange sweatshirt. Shoot with the flash(es) in one spot for a while, then try moving them around to get a different look. If there's a good white or neutral colored ceiling or wall around use it to bounce the light from your flash. 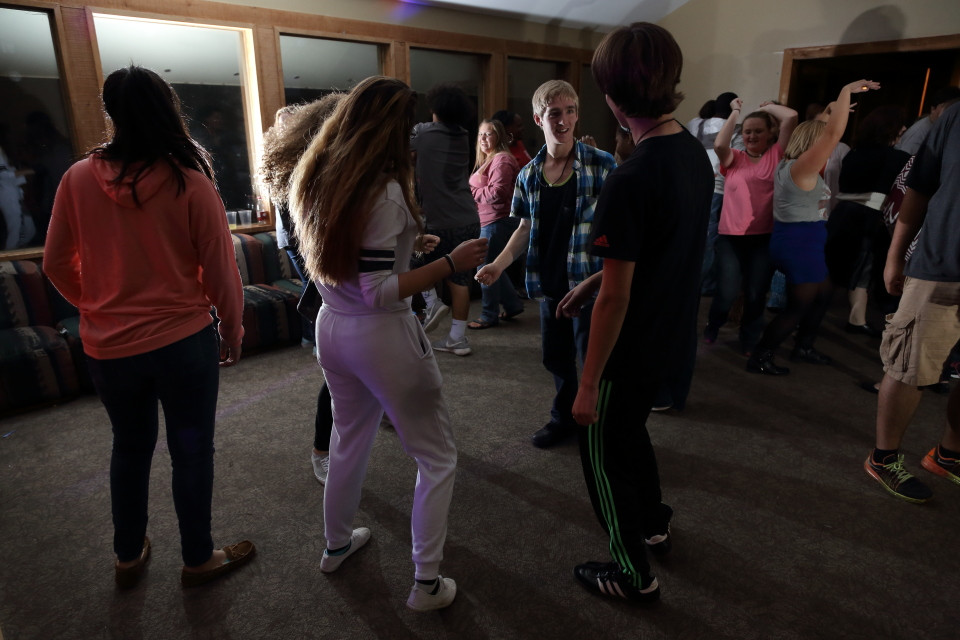 If there's a DJ with a lot of flashing/rotating/strobing lights shoot from a position that puts those lights behind you and slightly to one side. That allows you to catch the lights as they play on the revelers on the dance floor. 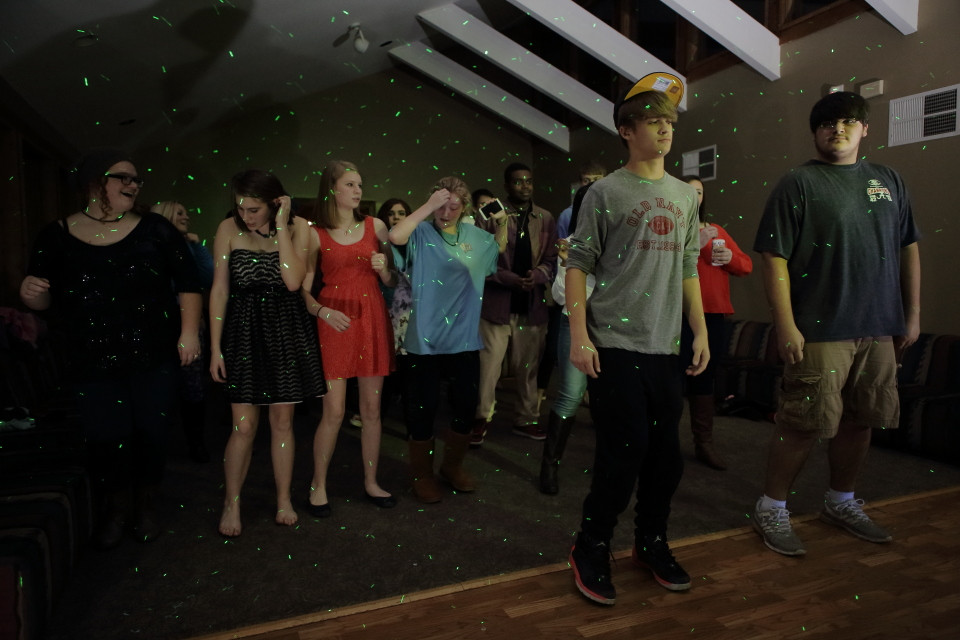 Or shoot from the other side of the crowd so the source of the lights can be seen. 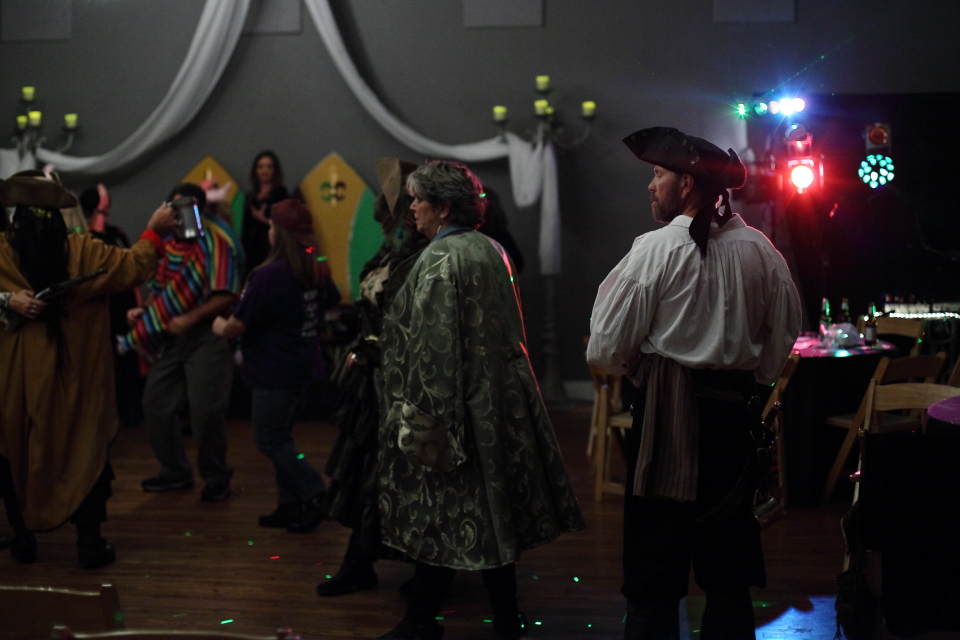 You can prefocus with your camera at eye-level (looking through the viewfinder) and then hold the focus while you raise the camera over your head to get a higher perspective and shoot over the people on the edge that often block your view of some of the action you want to capture. Wider angle lenses give you more room for error (and cropping in post). If you use back-button AF you can hold focus and take several shots before bringing the camera back down. The best stuff at parties is always in the center of a ring of people! 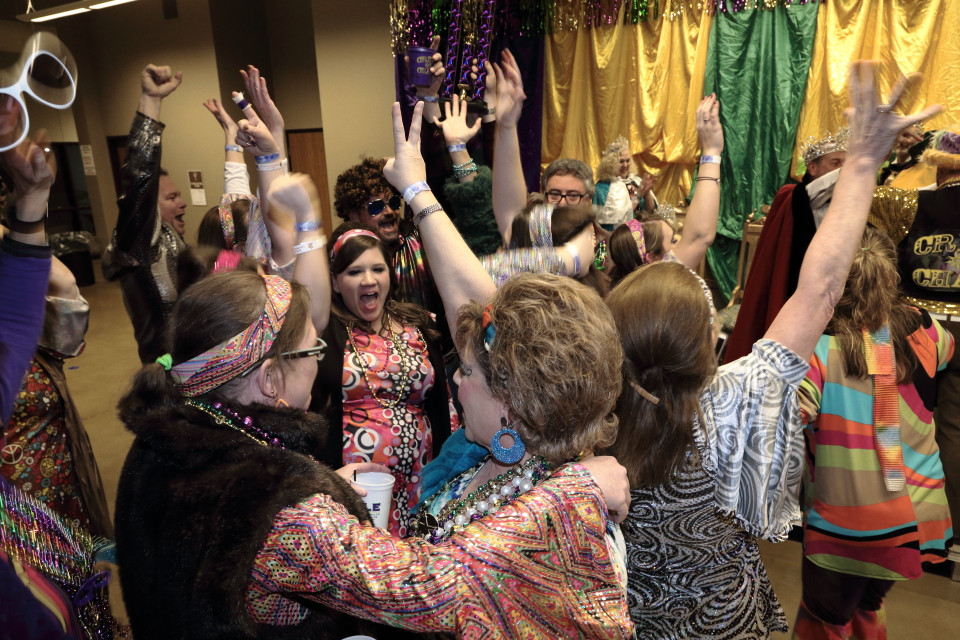 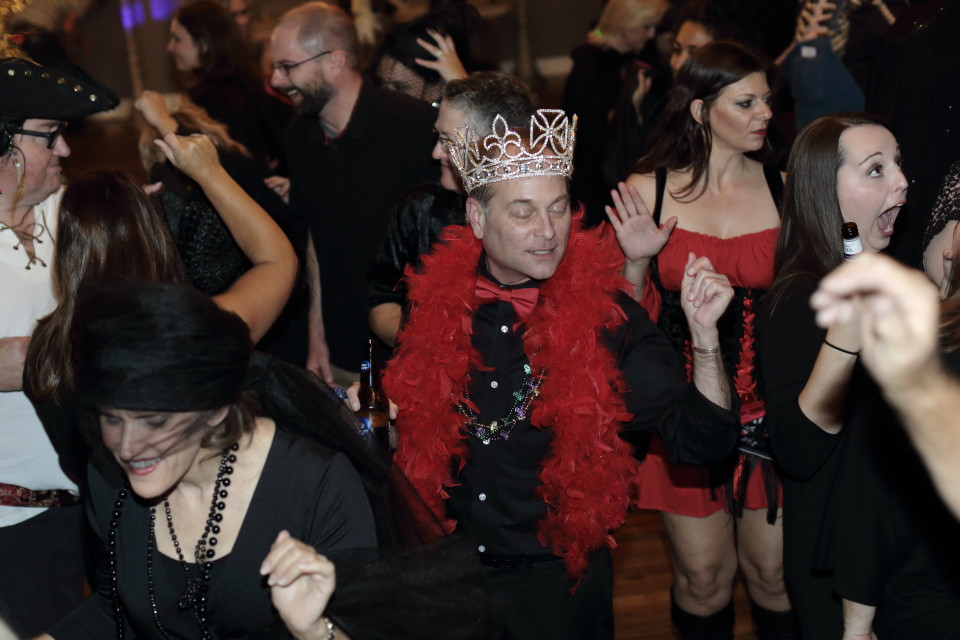 Is there a band or DJ in a poorly lit corner? This answer emphasises why saving RAW instead of JPEG data in dance/club settings can make a HUGE difference in the finished images! 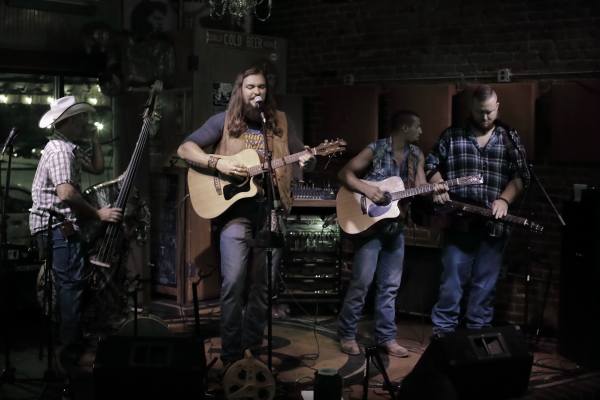 On-camera flash will kill the vibe completely, unless you want a few simple record shots of your friend at his console. But club lighting should present you with plenty of dramatic lighting opportunities.

Getting close to the action with the wide-angle is dramatic and effective. This is going to be largely low-light photography, so set the 'film speed' high and prepare for a lot of dud shots between the good ones! Manual focus will be more useful than auto.

I'm going to duck the issue of whether the clubbers WANT to be photographed. Most won't care. A few might be out with the 'wrong' person :-)

Here's some shots of a live gig, not a DJ. Same idea though. No special gear. Doesn't hurt to have London's river as a backdrop though! Does the grain bother you? No, me neither. 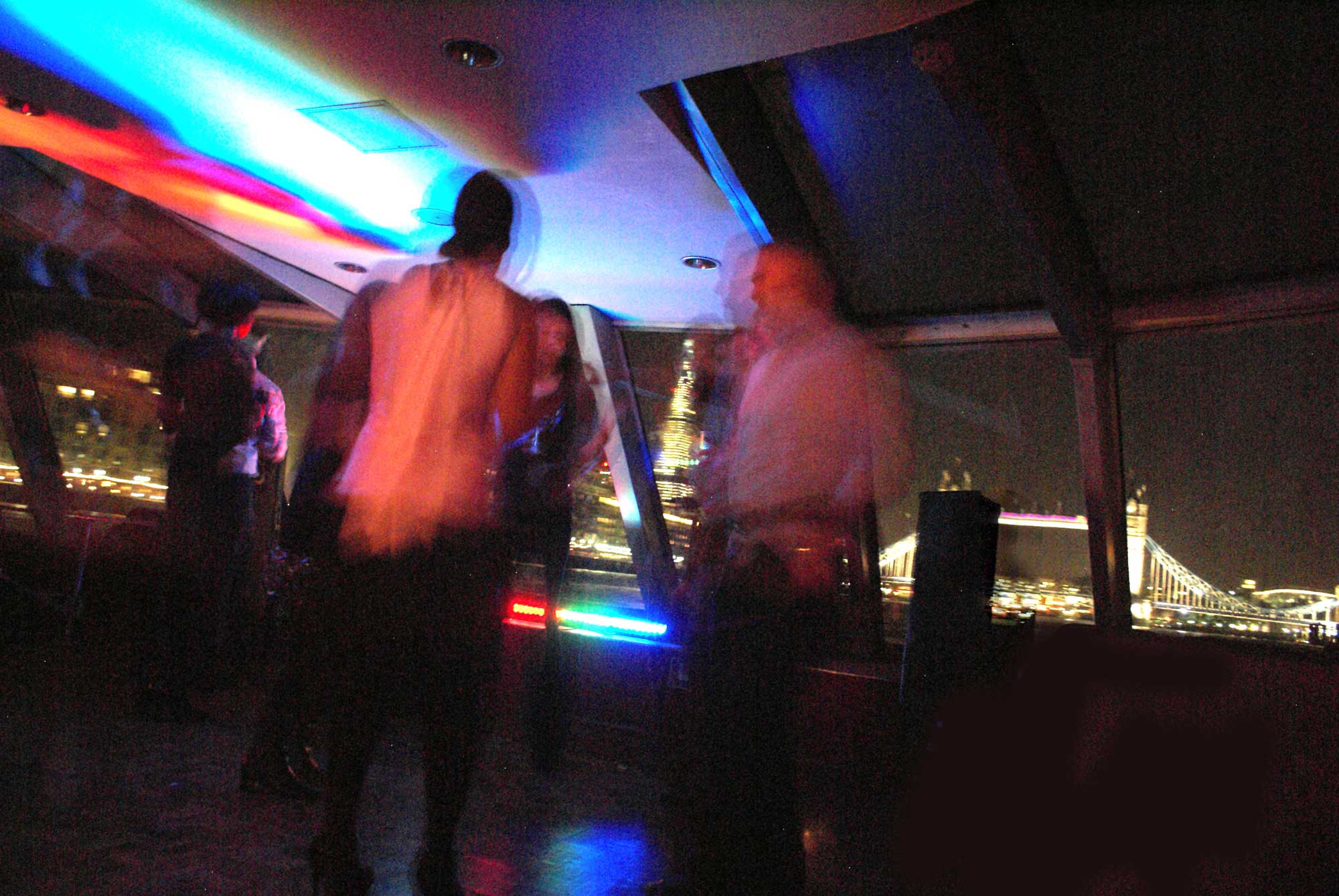 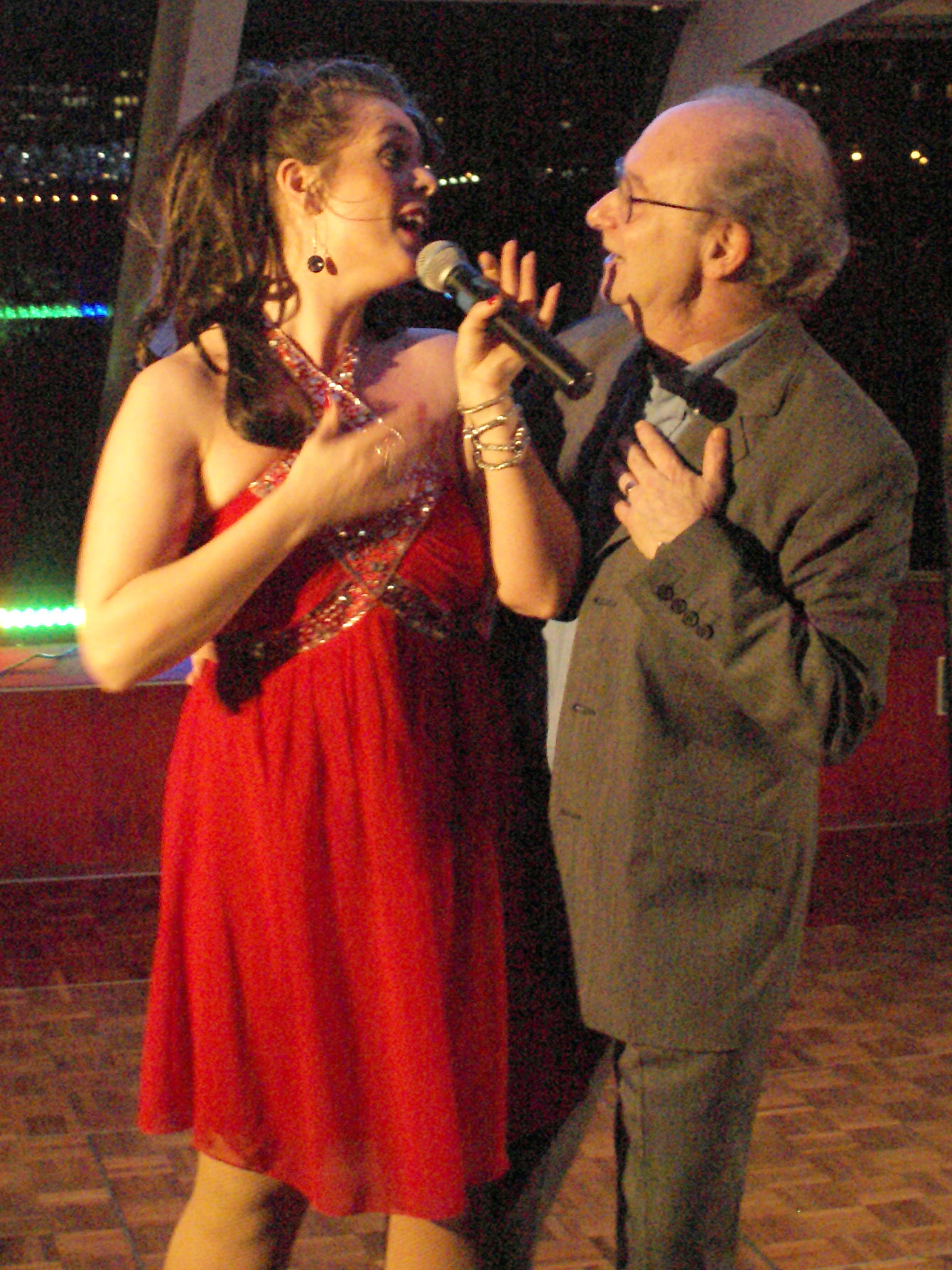 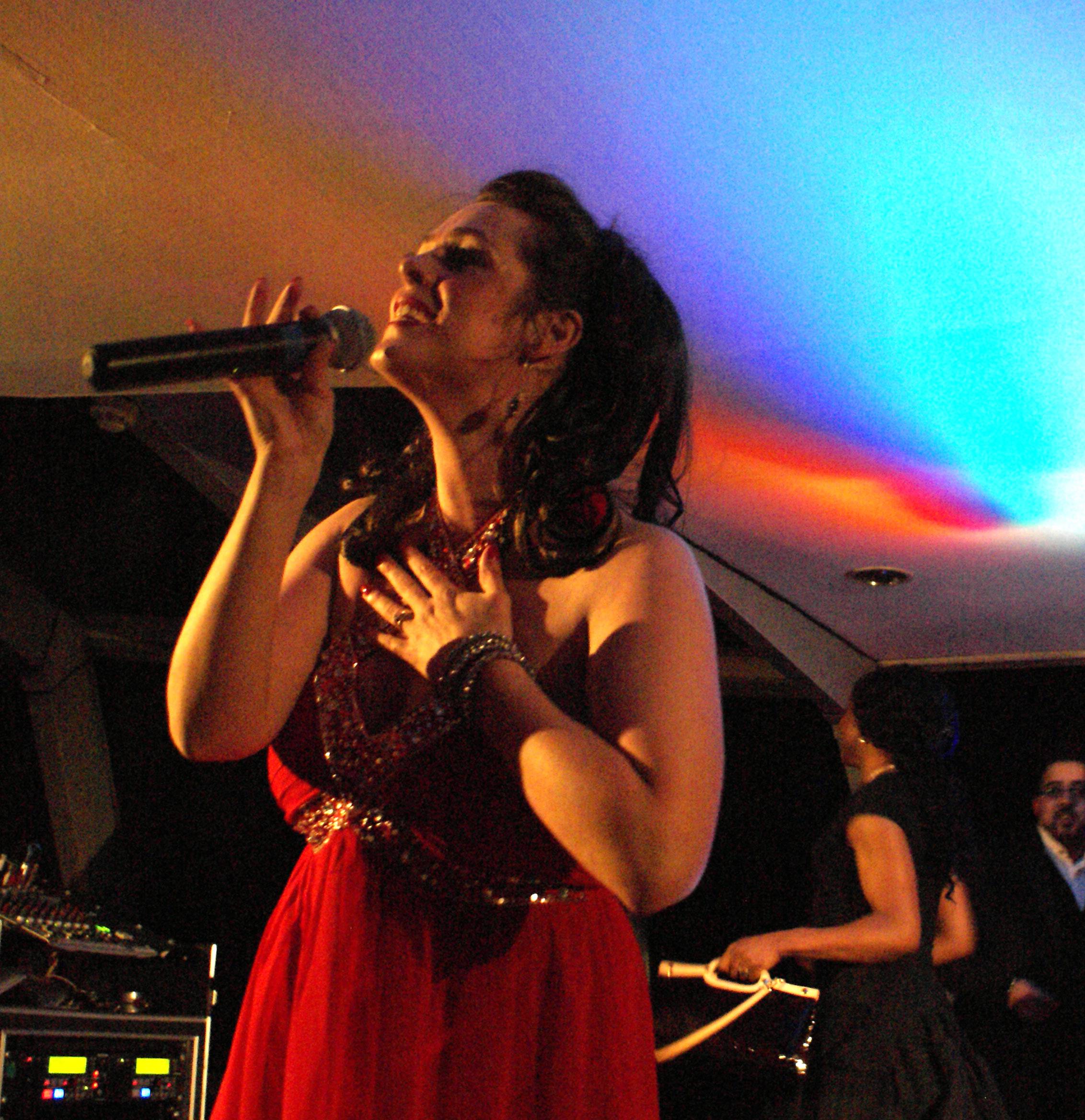 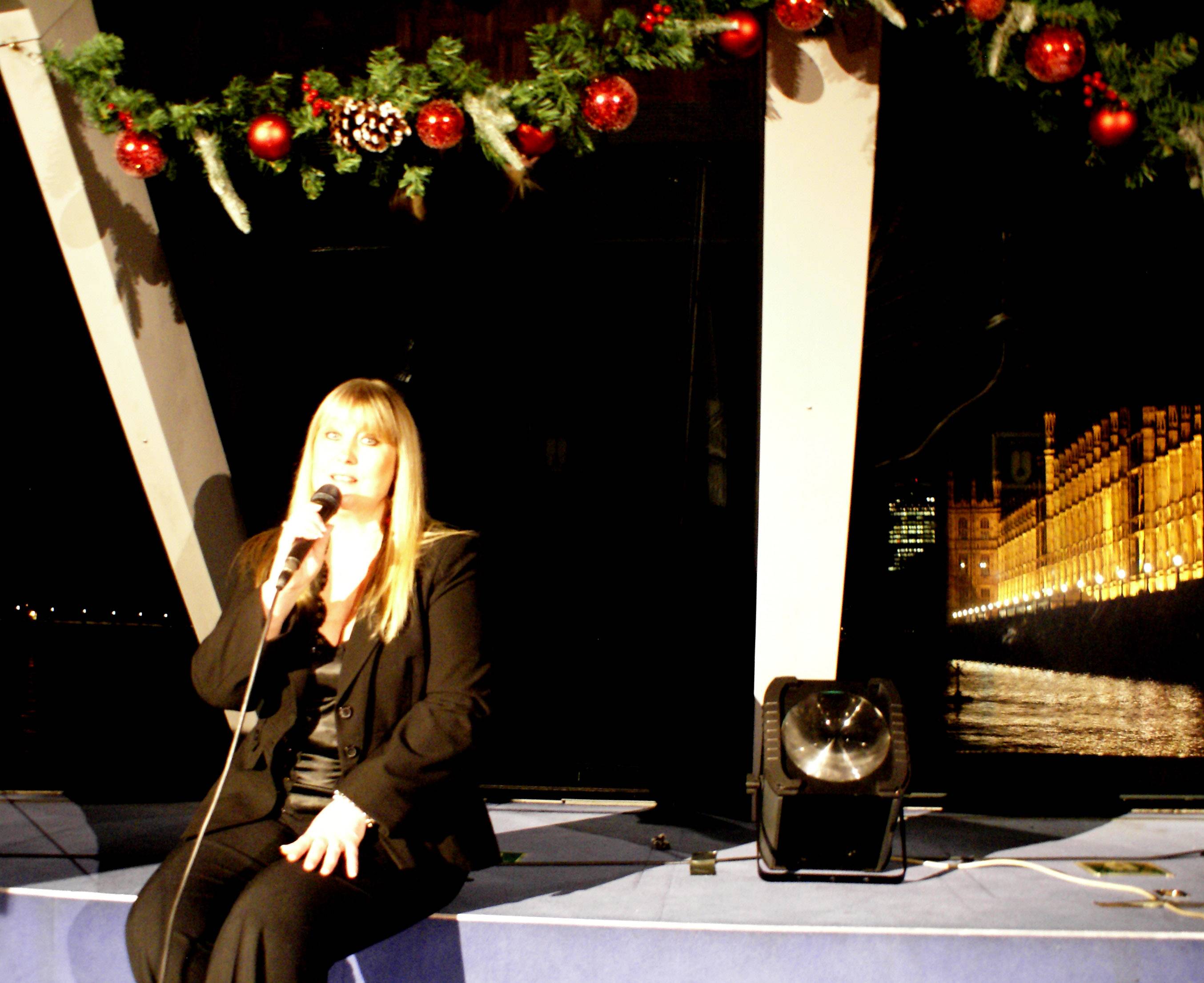 The other answers already answer the questions posed but there is one more thing that you should keep in mind with this specific camera. It has great low light capabilities and resolution but pretty strong rolling shutter. This might be an issue when shooting with some lights, especially strobe lights.

Not the answer you're looking for? Browse other questions tagged equipment-recommendation sony camera-basics nightclubs or ask your own question.

58
Who, or what, is an "Uncle Bob"?
25
What should my plan be for photographing in a nightclub setting?
14
Lots of noise in my hockey pictures. What am I doing wrong?
10
Blown out blue/red light making photos look out of focus
7
When should I use exposure compensation?
10
I'm having trouble getting sharp pictures while shooting a concert from a press pass location
9
Best ways of photographing at a concert/festival
7
What does the AE/AF lock button do that half-pressing the shutter doesn't?
8
What went wrong with this concert photo and what could I have done to make it better?
5
With the advantages of an AF-ON button, why don't all DSLRs have one?
See more linked questions

13
What should I do to switch my gear from Sony to Canon?
7
What differences exist between third-party and official lenses for Canon APS-C DSLRs?
1
What lens do I need to do product photography with my Olympus E500?
3
What gear for Sony off-camera flash sync with TTL?
3
What to look for in a wide angle lens?
3
What should I look for in a camera which could cover all of astrophotography, microscopy and general purpose photography?
4
What should I consider when getting a camera for product photography?
0
Visiting Iceland, photographic equipment review what do I need to replace?